Martin McAuliffe, born in Ireland in 1798 would become an emigrant from his homeland to Upper Canada. Arriving here he made his way to the Newcastle District. After establishing a homestead, he took Mary Leonard as a bride, in the early 1830s. Born in County Cork, Ireland, she was the daughter of Bartholomew Leonard and came to this country as part of the Peter Robinson immigration in 1825. Bartholomew, a widower with seven children, settled in Ennismore Township on the north half of Lot 2 of Concession 1.

Leonard, the youngest son, grew up and eventually married. His wife was Mary Ann Herlihey, a daughter of William Herlihey and Mary Sheehy. Mary Ann and Leonard married at St. Luke’s Church in Downeyville on 23 January 1883. They also chose to make their home in Emily Township. By the early 1890s, four children had been born to them.

Their daughter, Mary Loretto was born 3 November 1884. She later wed Charles Alfred Costello. Martin Joseph was born on 3 October 1886. William Victor was born 22 March 1889 and Patrick was born 11 June 1891. Mary Ann became ill following the birth of Patrick. On 9 July 1891, in Emily Township, she died of inflammation of the lungs.

About two and a half years later, Leonard married again. His second wife was Catherine Perdue, daughter of Thomas Perdue and Catherine Harrington. Leonard and Catherine married at St. Martin’s Church, Ennismore Township, on 23 January 1894. To them were born three sons, Thomas in 1896, Leonard in 1897 and Michael Joseph in 1899. Michael, the youngest, was the only one of these three boys who married. Elizabeth Kathleen daughter of William Harrington and Elizabeth Ann Scollard, became the wife of Michael, on 18 April 1922. 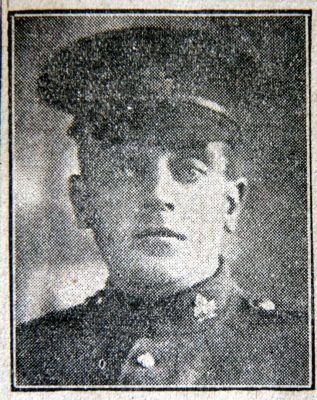 A Son Goes to War

Martin Joseph McAuliffe was a young man still in his twenties, when the first World War broke out. Leaving his employment as a laborer, Martin enlisted in the Canadian Military on 4 March 1916 at Peterborough. At the time he resided in Ennismore Township and gave his step-mother, Catherine’s, name as his next of kin. He had already served for one year with the 95th Regiment. Not overly tall, at 5 feet 3 inches, Martin was of fair complexion with blue eyes and auburn hair.

After completing his basic training, Martin left Canada on board the SS Empress of Britain to arrive in England on 25 July 1916. He was attached to the 93rd Battalion, the unit in which he next served in France for one year.

On 12 March 1917, Martin was wounded, being hit about the face with flying shrapnel. After a few weeks recovery, he was able to return to his unit in April 1917. He was wounded again on 27 May, 1917, but was able to remain at his post.

He was further exposed to gas on 22 August and again on 11 September 1917. Several hours after being exposed to poisonous gas, Martin began to experience problems with his eyes and burning in the throat. He was removed to London General Hospital at Wandsworth and later, when he developed conjunctivitis in both eyes, he was sent to West Cliff Hospital.

Martin was again transferred to the General Hospital in Liverpool from where he was once more moved, this time being sent back to the Military Hospital at Kingston, Ontario. On 10 April 1918, at Kingston, Martin was discharged from further service on behalf of his country.

At home again, Martin resumed his prewar life. He lived on his own, rather than return to his step-mother’s household.  On 15 June 1940 he died at the relatively young age of 53 years. His remains rest in the McAuliffe family burial plot in St. Martin’s Cemetery, Ennismore, Ontario. 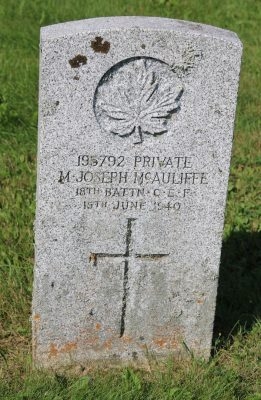