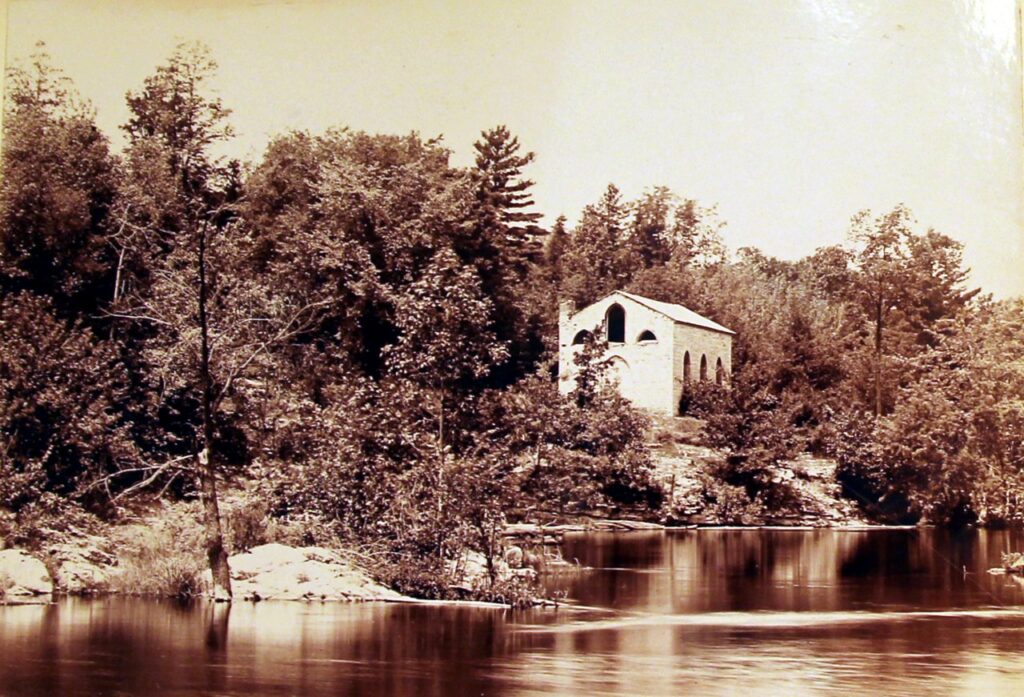 This photograph taken in latter 1890s was labelled “Round Church on Crowe River, Marmora” in an old family album. The building is St. Matilda’s Catholic Church in Marmora, taken by C. J. Barr on a camping tour organized by Joseph Keele. The view shows the southern exposure of the church.

St. Matilda’s was built on land given to Bishop Alexander MacDonnell in 1826 by Peter McGill. In 1828, under the supervision of Anthony Manahan, this small church 43 by 25 feet was built of limestone quarried from a pit a mere 200 feet away. An iron cross, constructed in the Ironworks across the river, was positioned on the peak of the roof.

This little church, built on the west shore of the Crowe River near the dam, was in use until 1874. A burial ground was located on the property, though interments were few owing to the rocky limestone consistency of the ground. One of the interments here was that of John, son of Laughlin Hughes, the first burial to take place in the cemetery. John drowned in the Crowe River near the church.

Founded and attended by Catholic families of the area, nonetheless, this little church served all ministries. It had been built through a community effort that had been supported by the Ironworks and all employed there. Methodist preacher, Reverend Henry Ryan, was one who held services here in 1805.

The old stone church was left to ruin from 1875 until well past the turn of the century. The roof and parts of the walls gradually fell in. The cemetery was left abandoned. In 1964, Fr. Walter Healey and Vincent Lynch lead a project to restore and preserve the remaining walls of this old heritage structure. Their work has become, for members of the community, an annual project to ensure the care and upkeep of the grounds and yet surviving ruins of the original church.