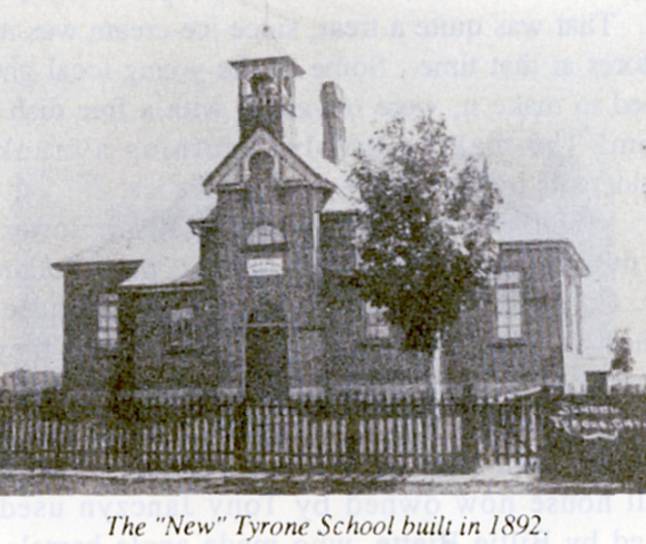 The school in the village of Tyrone has a long history. Around 1840, the same year that the hamlet became known as Tyrone, a school house was built to serve the need of educating local children. This first school, a two story structure, had two rooms. The lower classroom was used for the senior students while the junior children had the upstairs area. Each class was equipped with three rows of benches. The teacher’s desk was set on a raised platform at the “front” of the room.

Around 1870, a local carpenter, Mr. Tom Gardiner, was called in to build shelves along the walls. This shelving was used as desks for the children, who thereafter sat facing the walls with their back to the teacher. In 1883, the teacher was Mr. Slemon.

Early on in the spring of 1892, a newspaper account listed the students who were attending the Tyrone School that year. It was written up in the Bowmanville newspaper, The Canadian Statesman, of 11 May 1892. A copy of the newspaper account is shown here on the right.

The names of the students provided by the newspaper account were researched. Information was located about most, but not all of the children. What has been learned about these young people follows. 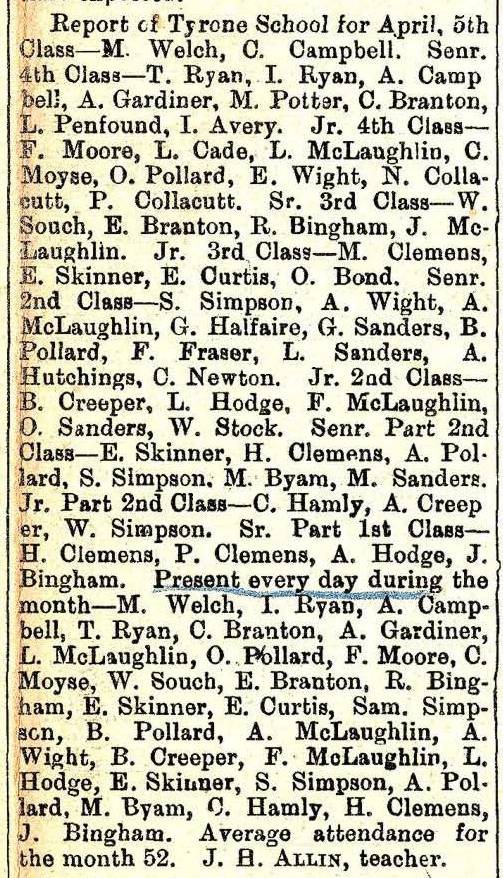 Thomas James Ryan and his sister, Ida Mabel Ryan were both in their senior year at school. Thomas was born in July 1877, in Northumberland County. He later married Caroline Eileen MacGregor, daughter of James Malcolm and Caroline (Bower) MacGregor. Thomas and Caroline made their home in Toronto. He died there on 17 November 1940. Caroline died 2 June 1960.

Ida Mabel Ryan was born in 1875 in the hamlet of Haydon, Northumberland County. As a young woman, she married Robert Harry Campbell, at Toronto, Ontario on 4 July 1916.

Archie Campbell, another senior student, was 13 years old in 1892. Born in 1878, he was a son of Alexander Campbell and his second wife, Jane Farrell. Archie was born in Wentworth County, Ontario on 21 October 1877. By 1891, his family was living in Darlington Township, Durham, County.

Alfred Disraeli Gardiner was 12 years old in 1891. He was born 5 June 1879 in the village of Tyrone, Ontario. A son of Thomas Gardiner and Mary Lavina Brisbin, Thomas was a senior student in 1892 when his family resided in Darlington Township.

Elizabeth Penfound, probably known as Lizzie as a child, attended the Tyrone School in 1892. She was born 26 May 1877, a daughter of Joseph and Emma (Brooks) Penfound.  Elizabeth died at Tyrone on 9 July 1908, of consumption. She was buried in the Bowmanville Cemetery.

Ida May Avery, another senior student was 13 years old in 1892. She was born in 1878, a daughter of George and Jane (Stacey) Avery. As a young woman, Ida married Frank Westlake. They lived in the community of Solina, Durham County where they raised a family of three sons and a daughter. Ida May (Avery) Westlake died at Solina on 27 January 1971. Her husband Frank Westlake, died in 1960.

Lena Cade, born in Ontario in 1876, was a daughter of Joseph and Hannah (Collacutt) Cade. Joseph was born in Lincolnshire, England. Hannah was born in Ontario. Lena later married Herbert W. Baxter. She died in 1947 at Essondale, British Columbia. Herbert died in Michigan in the United States.

Lorne McLaughlin was 12 years old in 1892. Born in 1879, he was a son of John McLaughlin and Margaret Evans. Lorne was not the only child in his family, attending the Tyrone School in 1891. Also going to school was his sister Adelaide May, known as Addie. Lorne served in the military, becoming a Colonel. He married Isabel Keith Smith. Lorne McLaughlin died 29 August 1961.

Oswald Pollard, aged 13 years in 1891, was born in 1878. He was a son of Samuel Pollard and his wife, Mary Ann Brent. Oswald’s full name was Samuel Oswald Silby Pollard. Oswald married Alice Coakwell, daughter of George and Charlotte (Remmer) Coakwell.

May Clemens was 10 years old in 1891. Her full name was Violet Ethel and she was a daughter of John Samuel Doney and Elizabeth Coffin. Her mother died and May was adopted by Wesley Rosevear Clemens and his wife, Mary Jane Bruce. May later married Thomas George Bragg. May died 10 September 1902 in Bowmanville, Ontario. Her husband, Thomas died in 1936. 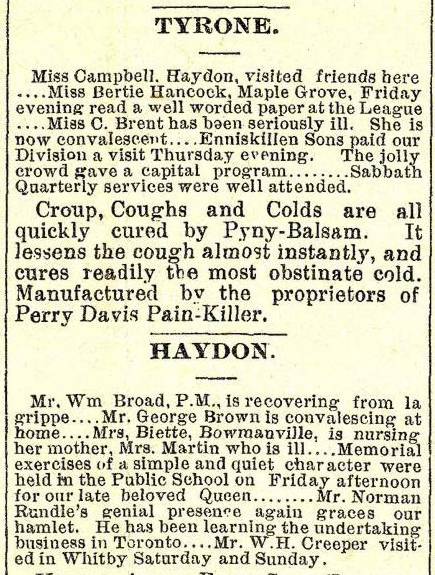 There were other classes of children attending the school in this era. During April 1891, the school attendance for the month was 52. J. H. Allin was the teacher.

One of the local newspapers, The Canadian Statesman, published in Bowmanville on October 26, 1892, ran an ad for a teacher to be hired at the Tyrone School.

A new teacher, Mr. Brown, of Toronto, was interviewed and hired. That news was also published in the same local paper in its issue dated November 16, 1892. 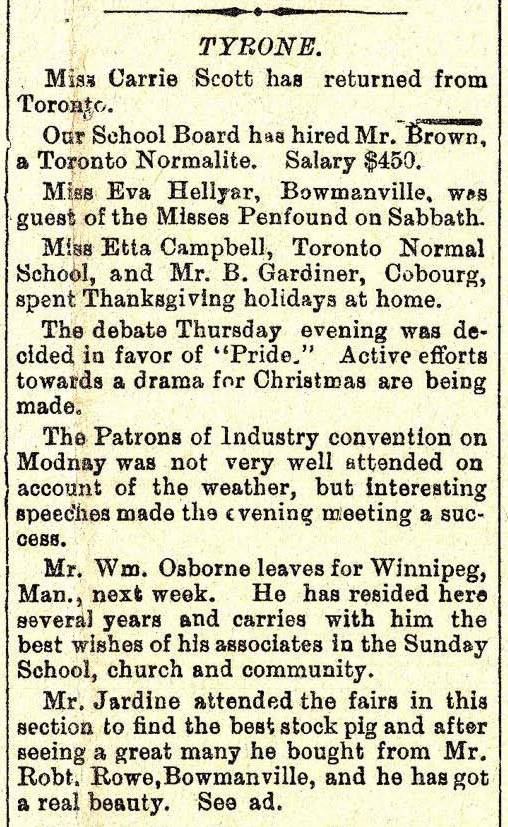 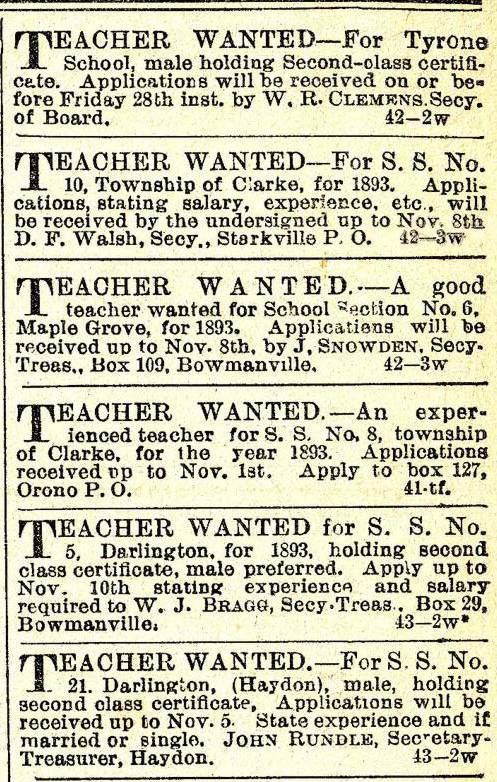 As so often happens with the old schoolhouses, the Tyrone school eventually closed and was sold. Today it is in use as a private residence. 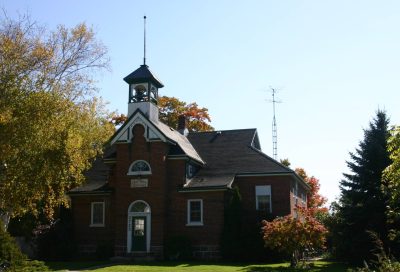