I received your post card. We are a going to move pretty soon. We are all well and wish you the same.

Louisa Peling, author of the short post card message above, was born 18 September 1895, probably in Prince Edward County, Ontario. She was the eldest child of Edgar Peling and Edith Blanche Jackson. They had married 15 November 1894 at the Cherry Valley Parsonage, in Athol Township, Prince Edward County. By 1907, the family made their home in the town of Bloomfield, Hallowell Township in Prince Edward County and it was the location from which Louisa wrote to her cousin, Beatrice Bartlet. Not long thereafter, Louisa’s family moved to the United States where she died at the young age of 31 years. The death of Louisa Peling occurred in the village of Whitesboro, Oneida County in the State of New York on 15 December 1926. 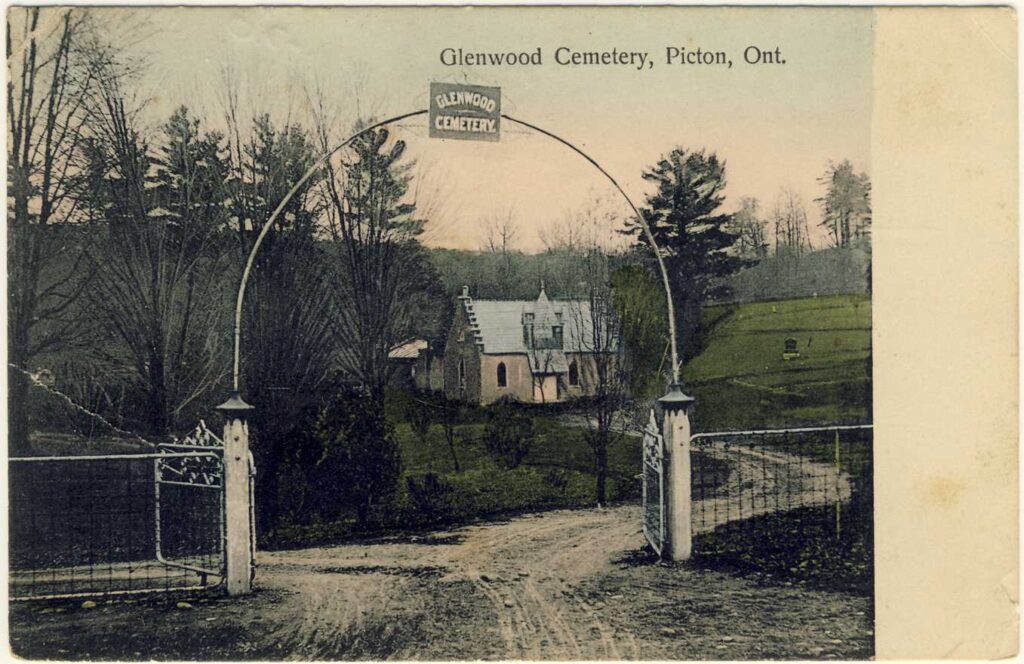 A rolling landscape patterned with winding dirt roads, marks this old cemetery as a place of beauty and history.

The cemetery was originally a tract of land granted to Loyalist soldier, Era Ferguson. Over the years it has served different and changing needs. At one time, a brewery was located on this land and in the 1860s, the property was used for a tannery business. After the tannery closed in 1864, the land was farmed until being sold for use as a cemetery in 1883.

The stone chapel at the Glenwood Cemetery in Picton, Ontario was built in 1901. It contains five stained glass windows which were part of an extensive renovation project in recent years. The building and windows all underwent careful restoration.

Beatrice Elizabeth Bartlet was born in 1896 in Seymour Township, Northumberland County. The 1901 census shows her as the adopted daughter of George Henry Bartlett and Emily Rebecca Potts. George and Emily were married at Meyersburg on 1 January 1890. Emily, wife of George Bartlett, was a daughter of George Potts and Cordelia Jane Peeling. The family name of Peeling also appears with the spelling of Peling and sometimes Paling.

When Beatrice was a young woman of 18 years, her mother, Emily Rebecca (Potts) Bartlett died from heart disease. Her death happened on 31 January 1914 in Northumberland County, Ontario.

George Bartlett has an interesting history of his own. Born in England on 2 November 1866, it is quite possible that he was sent to Canada as a British Home Child, in the early 1870s. On his marriage registration in 1890, George reported that he did not know his parents names as he was too young when they died.

A search of the British Home Children to Canada website database revealed a child by the name of George Bartlett who came out to Canada under the supervision of Annie MacPherson.  The MacPherson receiving home was located in the Belleville, Ontario area. From here the children were placed with families throughout the province. This particular group of children left Liverpool, England on 2 May 1872 and arrived at the port of Quebec on 19 May 1872. Their voyage was made on the ship, Prussian. George was listed as a 5 year old. By 1881, George was living in Seymour Township in the household of John and Tryphena Haig. He was then 16 years old according to the census record. Nine years later, he wed Emily Rebecca Potts.

Six years after Emily died, George Henry Bartlett married again. Now in his mid fifties, his second wife, Clarinda Elizabeth Winifred Hankinson had reached her 50th birthday. She went by Winnie, a variation of her third given name. They married in the village of Hastings on 17 April 1920. George and Winnie lived in Campbellford for over twenty years. George Bartlett died in the village of Campbellford on 21 February 1941. He rests in Mount Pleasant Cemetery, Campbellford, alongside his first wife, Emily (Potts) Bartlett.

Beatrice, the adopted daughter of George and Emily Bartlett, married Peter Beattie. He was born in Glasgow, Scotland in 1893.

Peter and Beatrice married on 23 July 1919 at the Bartlett family home. Afterward, they took up residence in Campbellford, Ontario. Here they raised a daughter Gladys, born in 1920. 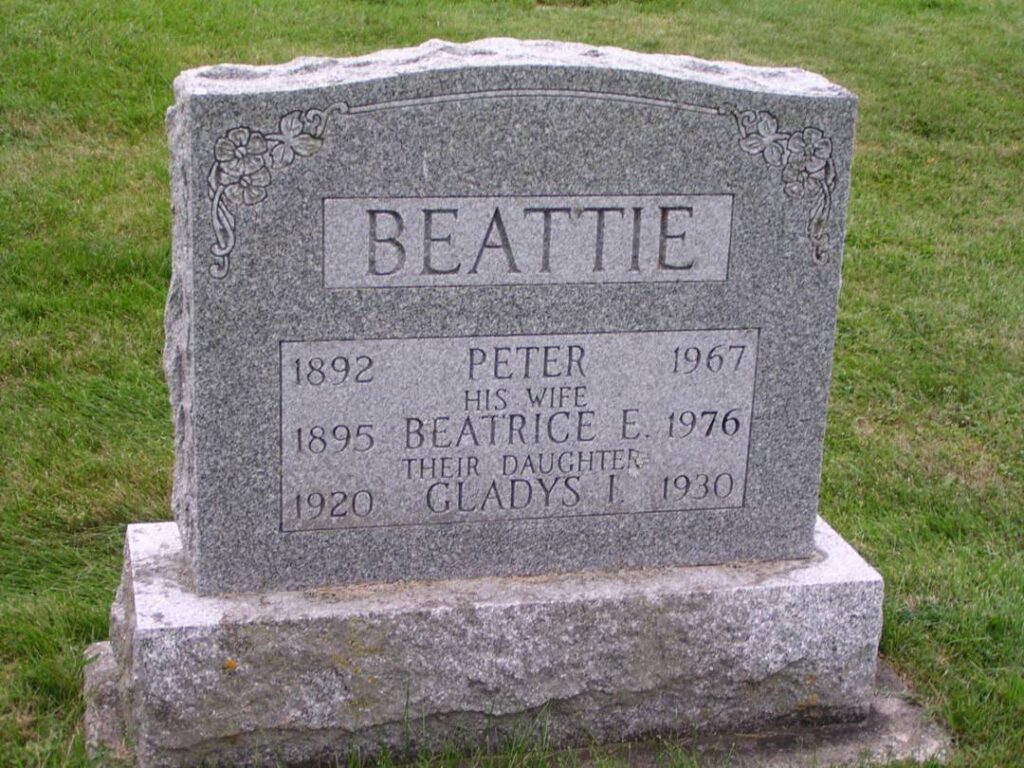