William Meldrum - A Miller in Peterborough​

William Hewitt Meldrum was born in the community of Winterbourne, in Waterloo County, Ontario on 28 July 1850. His father, John Meldrum came from Aberdeenshire, Scotland to settle in Canada West, in 1842. As a young boy, William attended elementary school in Kitchener. One day he would become a well recognized miller in the town of Peterborough, some three hundred miles away from his place of birth. 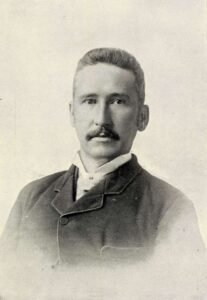 At the age of thirteen years he began an apprenticeship to the milling business with Henry Snider at Conestoga. He stayed seven years before taking employment elsewhere. William worked for a number of firms before entering into business on his own. He worked for  Thomas McKay & Company, in Ottawa, with D. Allan of Guelph, with Mr. Ogilvie of Goderich, with Knowleton & Shange of Alliston and with Gilchrist & Hume of Galt, Ontario. Finally he went back to Mr. Snider’s mill at Conestoga.

Back at Mr. Snider’s mill, William was instrumental in putting almost the first installed sets of rollers made by the company Goldie & McCulloch of Galt, Ontario. William next worked for a period of almost two years at Ayton, Ontario. It was during this time that he began to design mills for W. & J. G. Grey of Toronto. After leaving Ayton, William worked for about a year and a half at Paris, Ontario.

In 1886, he moved to Peterborough, Ontario where he became associated with the firm of Meldrum & Davidson. The company prospered, growing in trade with the Eastern and Lower Provinces, with the West Indies and Great Britain. In addition to its flour exports, the company also had general business interests in grain.

Street, Toronto. They had a family of three children, Arthur born 1881, Mary born 1888 and Harold born in 1891. An unfortunate accident claimed the life of young Arthur when he was just 8 years old. He became caught in the equipment at the mill and was instantly killed.

William Hewitt Meldrum died at Nicholls Hospital in Peterborough on 19 July 1935. He was buried in Little Lake Cemetery next to his young son, Arthur.