Here is a story that began when I happened to notice the death notice of Edment’s mother while searching newspaper microfilm for an entirely different family name.

Edment was born in Frome, Somersetshire, England on 17 November 1822. A few short weeks later, his parents John and Ann Hill to their infant son to be baptized at Holy Trinity Church in Frome. On that day he was named Edment Carpenter Hill.

When Edment was nine years old, his parents emigrated from England. They arrived in Little York (now Toronto), with their family of twelve children. By 1851, John and Ann resided in Barton Township, Wentworth County. They had a one story stone house on 15 acres of land at Lot 11 Concession 4 in the township. In this year, John was 62 years old and Ann was 66 years.

John passed away sometime over the ensuing ten years. Ann was a widow by 1861. She lived in the home of Thomas and Jennetta Mason. With the passing of another ten years, Ann, in 1871, was found living in the household of her son and daughter-in-law, Charles and Mary Jane Hill. At this date Charles and his wife had a family of four children: John aged 17 years; Edmend, aged 15 years; Henry, aged 7 and William, aged 5 years.

Ann Hill died the following year. Her death appeared in the issue of 19 April 1872 of the Peterborough Review newspaper published in the town where her son, Edment, lived.

From the newspaper account, we learn the particulars of the family immigration in 1831 departing Frome, Sumersetshire, England to travel by ship to Upper Canada. 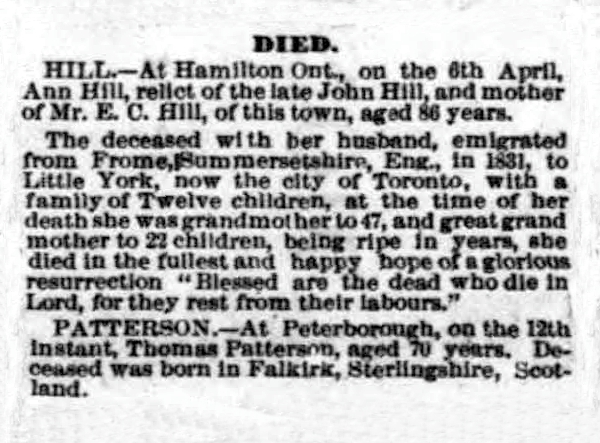 Edment Carpenter Hill, who came to live in Peterborough, Ontario, is the only child of John and Ann who has thus far been researched. It appears that Edment went to the United States for a time. There he married Mary Elizabeth Burrington and they had a son, Augustus, born in 1840 in the States.

By 1851, Edment and Elizabeth lived in the town of Peterborough. Edment had a shop where he produced carriages. The 1858 directory for the town indicates that his shop was on Hunter Street. His carriage making business was continued into the early 1870s.

Edment and Elizabeth seem to have suffered the loss of their children. Augustus who was 12 years old in 1851, does not appear with the family again. He was not listed in any directories nor was a listing found for his death listed among the “Hill” named individuals buried in the Little Lake Cemetery. In 1861, a five year old daughter, Emma, was found in the household. No further record was located for this child. In 1871, Edment and Elizabeth had a ten year old daughter, Cassie. Like her older siblings, no further trace was located for what became of her. A fourth child of this couple was Ida M. J., born in 1874. No further details were located for her.

In 1876, Edment had changed the focus of his work. He now had a grocery store on the north side of Brock Street west of George. He continued with this work over the next fifteen years. As well, he managed a skating rink on Hunter Street for a short interval and for a number of years, he managed the city Music Hall.

In the 1880s he also had a business as a bill poster. This work he continued until 1889 when he sold to a new owner.

In 1891, Edment was 68 years old. Mary was 63 years. Twelve months later, Edment died on 21 December 1892. His death was reported in the local Peterborough Daily Review.

His funeral was held as a private family service from his home at 380 Brock Street to Little Lake Cemetery, on 22 December 1892. 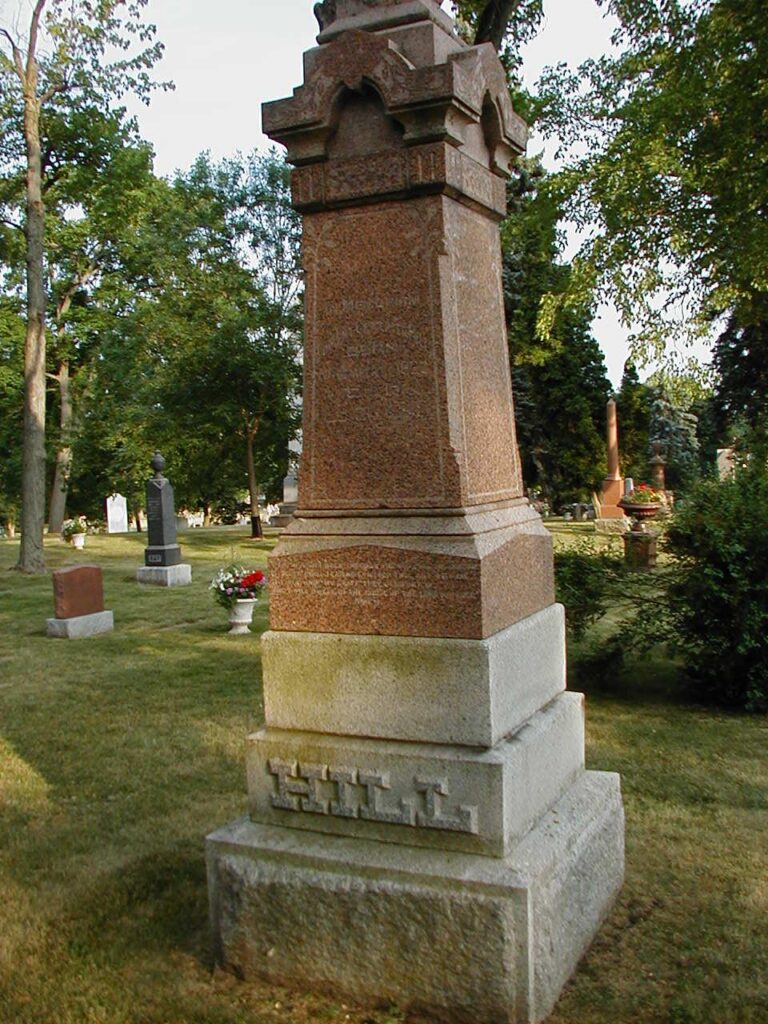 Following the death of her husband, Mary took over running the little grocery business that she and Edment had run for many years past. The store was located at 392 Brock Street, a corner lot where Park Street intersected. The store and house where they once lived have long since been torn down. A new tri-plex apartment building was put up on the site where their home once stood.

Never-the-less, Mary ran the store on her own for the next few years. Mary Elizabeth (Burrington) Hill died in Peterborough on 13 May 1896. The cause of death was a stroke. Her earthly remains were laid to rest beside her husband in Little Lake Cemetery.