Timothy Eaton was born in 1834 in Northern Ireland in the Townland of Clogher, Antrim County, only two months following the death of his father. Timothy was the youngest of nine children born to John Eaton and his wife, Margaret Craig. 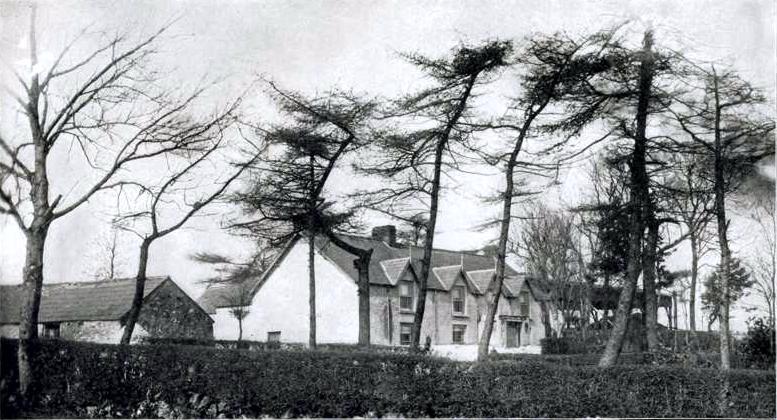 As a young boy, he was apprenticed to a relative by the name of Smith who had a store in the village of Portglenone, ten miles distant from the Eaton home. There Timothy resided six days a week. He had many duties each day to perform. Up at the break of dawn, he opened the store at five in the morning to catch early market goers. He closed near midnight and went to his bed, a small sleeping space beneath one of the counters. On Sunday, Timothy returned to his family home in Clogher, walking the entire ten miles. There he changed into his Sunday clothes to attend church with the family. Monday morning, he was back at work.

In the later 1830s, two of Timothy’s brothers left Ireland, immigrating to Upper Canada. After some years of his apprenticeship, Timothy also chose to follow in the footsteps of his brothers. He too left Ireland for Upper Canada arriving in 1857, at the age of twenty-three years. Here he settled in the small village of Glen Williams, Halton County and found work as a clerk.

In time, Timothy moved to the village of Kirkton, near the towns of St. Mary’s and London. There he kept a small general store. 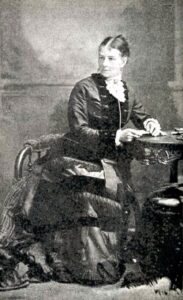 It was not long before Timothy outgrew the little village. His next residence was in the town of St. Mary’s where in partnership with his brother, James, he opened another general store. In 1861, the two brothers were residents of the town. The census of that year shows Timothy as a Grocer and Baker and his brother, James, as a clerk. Within another year or so, Timothy married Margaret Wilson Beattie of Woodstock, Ontario.

Timothy was not partial to the system of barter. Equally he disliked the credit system and the constant beating down of prices by both shoppers as well as other shop keepers. He found it difficult to get ahead and soon was looking for another location in which to do business. In 1869, sold out his share of the business and with Margaret and their three young children, moved to Toronto. In the city, Timothy set up a new store. 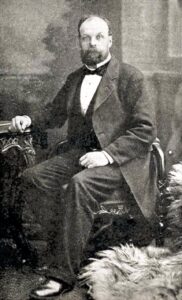 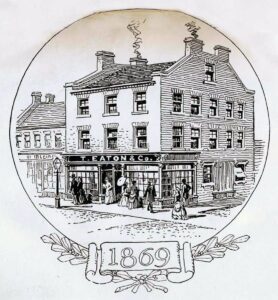 This store measured 24 by 60 feet and was not located in the fashionable shopping district on King Street, but further north on the south-west corner of Yonge and Queen Streets. His name was not one known in Upper Canada, so there was nothing to hope for as a draw of customers from that quarter. Wednesday 8 December 1869 was a cold dry day as Timothy unlocked the door for the first time. But in the early winter cold of the preceding  days, the Bay had frozen over. Energy tingled in the air. Christmas was drawing near and the public was in a buying mood.

The store operated on the principles of One Price only, no bargaining and cash only sales, no credit. Timothy was considered an oddity among the many businessmen of the city of Toronto. They predicted he would quickly fail. No one could run a successful store on a “No-Credit” basis! One further new concept he introduced became a slogan for the store: “Goods satisfactory or money refunded”.

During its fledgling year, Timothy operated his store from 8 a.m. until 10 p.m. daily on and Saturdays from 8 a.m. until 12 p.m. He had four employees, two men, one woman and one boy. Each weekday he attended the wholesale warehouses for the purpose of buying new goods for the store. Hand bills were about the only medium of advertising. In spite of all predictions, his store endured and prospered.

Within little more than a dozen years, the Eaton Store had outgrown it’s location. Timothy looked with interest at a section of Page’s Block on the same side of Yonge Street but a little further north. He succeeded in purchasing three stores in the group giving him a frontage of fifty-two feet and a depth of ninety-six feet. In short order he had the stores demolished and a new structure going up in its place. City dwellers were surprised since the stores that had been there were already considered handsome in appearance. It was not long until everyone began to appreciate the new imposing facade being constructed. Great modern panes of plate glass were installed as the front windows of the new store. The store appearance soon became a matter of public pride. The new location opened in August 1883. 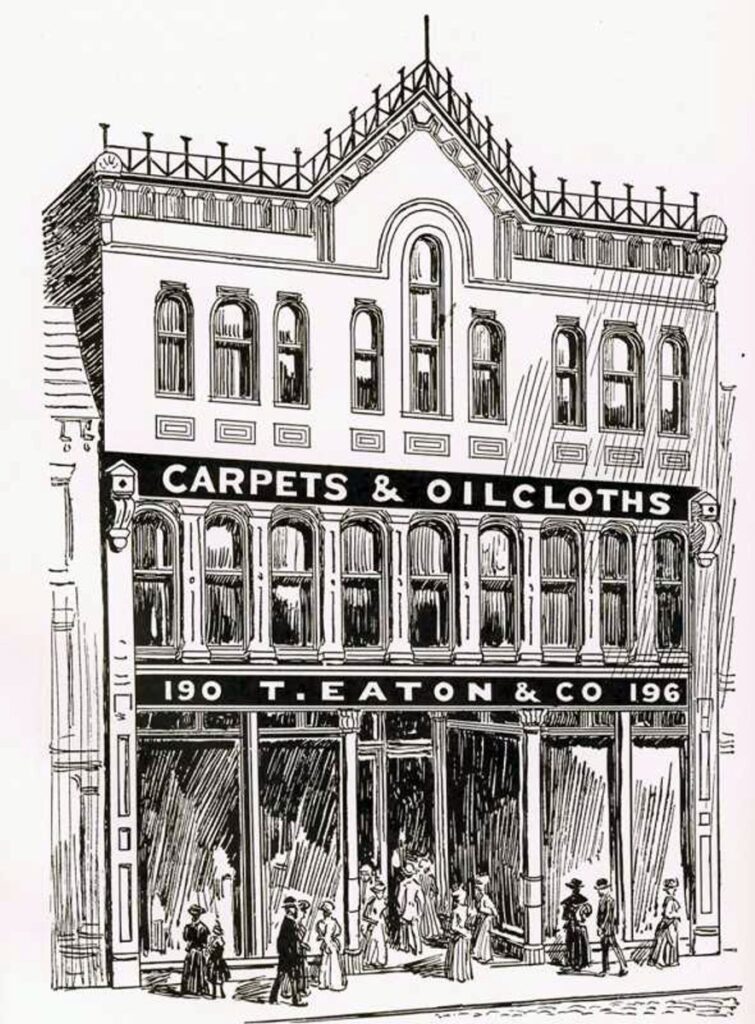 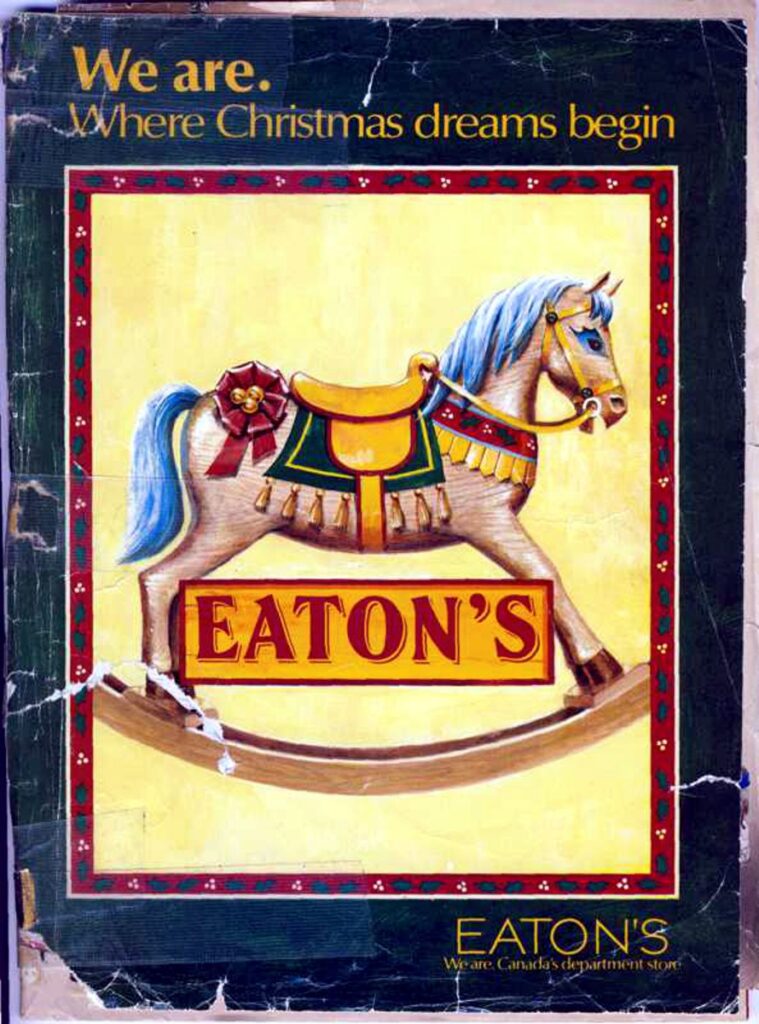 In 1884 the first Eaton Catalogue was issued. It consisted of a booklet six by nine inches in size enclosing thirty-two pages. On its cover was a picture of the store located at 190 Yonge Street. In the years that followed, on down one century and into the next, the Eaton’s catalogue became a well recognized and well thumbed household item.

The introduction of the catalogue heralded the beginnings of the Mail Order Department for the store. By 1919 this department had its own stock of merchandise and a staff of 2,140 people.

In 1885, the first telephone was installed at the store. As well as outside lines, the company had an extensive inter-departmental system of 120 lines.

The year 1886 was one of innovations for the store. In that year, the store introduced Saturday afternoon closings during the months of July and August. The business world of downtown Toronto was amazed by his action.

In that same year the Queen Street addition to the store was completed. This brought another thirty-one feet frontage and greatly enlarged the entire store capacity. When it was completed, a new entrance was available to patrons. 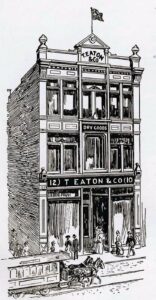 Also, in that year, the first passenger elevator was installed. Customers could have the pleasure of a ride to upper floors. However, they would have to walk back down again, as in this way it was expected that they would take the time to view sales items on each of the floors during their descent. To encourage confidence in the equipment, on its first day the elevator was run up and down all day long with wax passengers. It garnered a large crowd of curious onlookers.

Bargain Day at Eaton’s store was also created in 1886. To make it easier for staff to finish up and close on Saturdays during July and August, Bargain Day was offered on Friday. It quickly became an established event all year round. It was a unique drawing card for the store attracting customers not only from town but from great distances as well.

Bargain Day at the Eaton Store 1919

Turn of the Century Store Improvements

The evening of 29 September 1899 was a date with history. Citizens and visitors were invited to a Grand Promenade Concert given in the Store with music supplied by the Queen’s Own Rifles. Nothing was for sale. The evening was for site seeing only. The special feature of attraction on that early fall night was the lighting of the Store by electricity. Power was generated right on the premises. 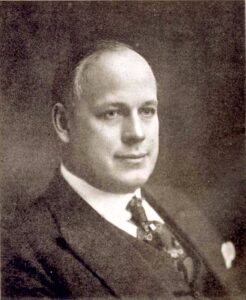 John Eaton Takes a Role in the Company

In 1900, John Craig Eaton, son of Timothy and Margaret, became Vice-President of the Company, stepping into the role following the death of his brother Edward. John was born in 1876. On 8 May 1901 at Omemee, Ontario John married Florence McCrea, daughter of John McCrea and Jane McNeely. Flora Eaton would long remember her hometown. In years to come she would make a number of contributions that improved the village properties. Through her gifts, the small chapel on the nearby cemetery grounds was built. 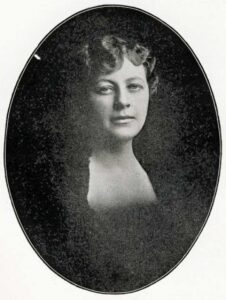 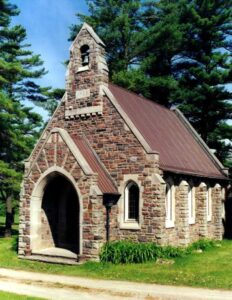 The Eaton Stores remained a dominate retailer in Canada for generations. They annually sponsored the Santa Claus Parade from its first presentation on 2 December 1905 until 1982. By the 1950s it was the largest parade in North America. Thousands of parents and children would line the route for the mile and a half long parade that finished with Santa waving from his reindeer drawn sleigh to excited children everywhere. The parade was broadcast live on radio and television in Canada. As an advertising strategy, a sad little bear character was created. Named Punkinhead, he became Santa’s sidekick and was featured in parades for many years.

The Eaton Store Company gradually lost ground in the business marketplace. The company folded in 1999 after operating for 130 years. 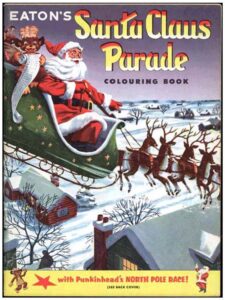