The Lancaster family who settled in Otonabee Township, Canada West, originated from the city of Lancaster in Lancashire County, England. Located in the northwest of England, Lancaster city today has a population of about 138,000. In the 1840s, the population was much smaller, numbering close to 32,000 souls.

Situated on a hillside its ancient castle is one of the best-preserved structures of its time. It holds a striking presence on the skyline of the city today. It was from here that the family of John Lancaster and his wife, the former Jane Atkinson, departed in the closing years of the 1840s. 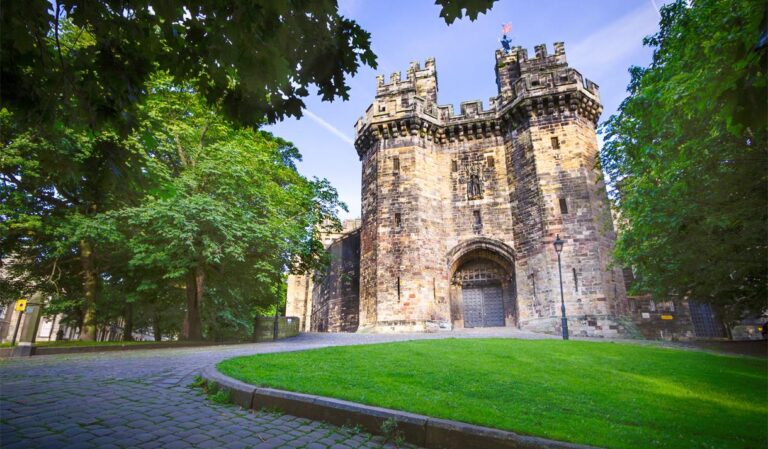 Children Born to the Marriage of John and Jane

John their first child, was born 14 February 1807 in the parish of Aughton, Lancaster city, in the county of Lancashire. Christopher and Margaret took their first-born child to St. Wilfrid’s Church to be christened on 5 April 1807.

Many years later, as a young man, John married Jane Atkinson. They wed on 7 August 1830 at the church in the parish of Tatham. Jane Atkinson was born 1810 in Westmorland County, England.

The following year, 1831, a son was born to John and Jane. He was christened at the Tatham parish Church on 27 March 1831 and was given the name Christopher. This child died before 1847, for another son was given the same name in that year.

James Lancaster was born 4 January 1833 in Lancaster. He was christened on 3 February 1833 at the Tatham Church.

William Lancaster was born in1834 in Lancaster and christened on 4 January 1835 at the Tatham Church. William did not marry. He died in Otonabee Township, Peterborough County, Ontario on 23 March 1904. He rests in the Westwood Cemetery, Westwood, Ontario.

Margaret Lancaster was born in 1836 in Lancaster. She was christened on 25 December 1836 at the Tatham Church. It appears that this child did not live long, for she was not in the household when the Tatham census was taken in 1841.

George Lancaster was born in 1838 in Lancashire County. He was christened on 22 July 1838 at the Tatham Church.

John Lancaster was born in Lancaster in 1841 and was christened on 21 July 1841 at the Tatham Church. This child died young.

Another son, also named John Lancaster was born 21 January 1843 in Lancaster. He was christened on 19 February 1843 at the Tatham Church.

Mary Lancaster was born in 1846 in Lancashire County. A christening record was not located for this child.

Christopher Lancaster was born 6 October 1847 in Lancaster. No christening record was located for him.

In 1848 John and Jane, with their family of six children, departed their home in Lancashire, England. Crossing the ocean and traveling inland toward Canada West, they slowly made their way to Otonabee Township. At the time of this voyage, their eldest child was about fifteen years. The youngest had barely reached his first birthday.

After arriving here, they joined John’s father, Christopher Lancaster, who had immigrated some years previous with his youngest son, William. Christopher and William had established a homestead on Concession 1 Lot 20 of Otonabee Township.

Once in Upper Canada, it was not long before William had married Jane Armstrong. Their marriage took place about 1836. He worked at Walker’s Mills in Asphodel until 1851. That year, William and Jane moved their family to Galway Township where he began working for the lumber king, Mossom Boyd. Their children were: Margaret born 1838; Mary, born 1841; Elizabeth, born 1843; Frances, born 1845; William, born 1851 and John born 1852.

Just as William and Jane, moved to Galway Township, John and his wife Jane, with their six children, took up residence with Christopher Lancaster on his Otonabee homestead. Within a few years, two more children were born to the family of John and Jane (Atkinson) Lancaster.

Their daughter, Jane, was born 23 September 1851 on the Lancaster homestead in Otonabee.  Thomas, the youngest child in the family, was born in 1855, on the homestead. Adjusting from their busy city life in Lancaster, England, it did not take John and Jane long to settle into the rural lifestyle on the farm. Within a decade of the family arriving in Canada West, the older children were grown.

Lifetimes of the Adult Children of John and Jane

On 9 December 1859, James, son of John and Jane (Atkinson) Lancaster, married Ann Faux. Her birth on
16 November 1835, made Ann the eldest of ten children born to Thomas and Ellen (Keefe) Faux. Their surname is often spelled Fox in official documents. During the first ten or so years of their married life, James and Ann made their home in Otonabee Township.

Headstone at right is for James Lancaster
Source: Find A Grave website

James Lancaster Sr. died in Asphodel Township on 8 August 1900. His wife, Ann (Faux) Lancaster, died 2 April 1900, just a short time before the demise of her husband. They rest in the Westwood Cemetery, in the hamlet of Westwood.

George, son of John and Jane (Atkinson) Lancaster, was born in 1838 in Lancashire, England. He was a boy of about ten years when his family immigrated to Canada West. In the course of time, George grew up and married Jane Scott Cameron. Jane was born in 1843 in Asphodel Township. They first made their home in Douro Township. By 1881, they had moved to Otonabee Township.

Four children were born to them. John was born in 1866 and died the following year, 1867. Thomas was born and died in 1873. Annie Jane was born in December 1874. She married her second cousin, Vivian William Lancaster in September 1905. Mary was the youngest of the four children born to George and Jane. Mary lived only one day, her death occurring on 22 December 1876.

George Lancaster died at the age of 56 years on 23 July 1894. Jane (Cameron) Lancaster died 13 March 1916 in Peterborough. They rest in the Westwood Cemetery. 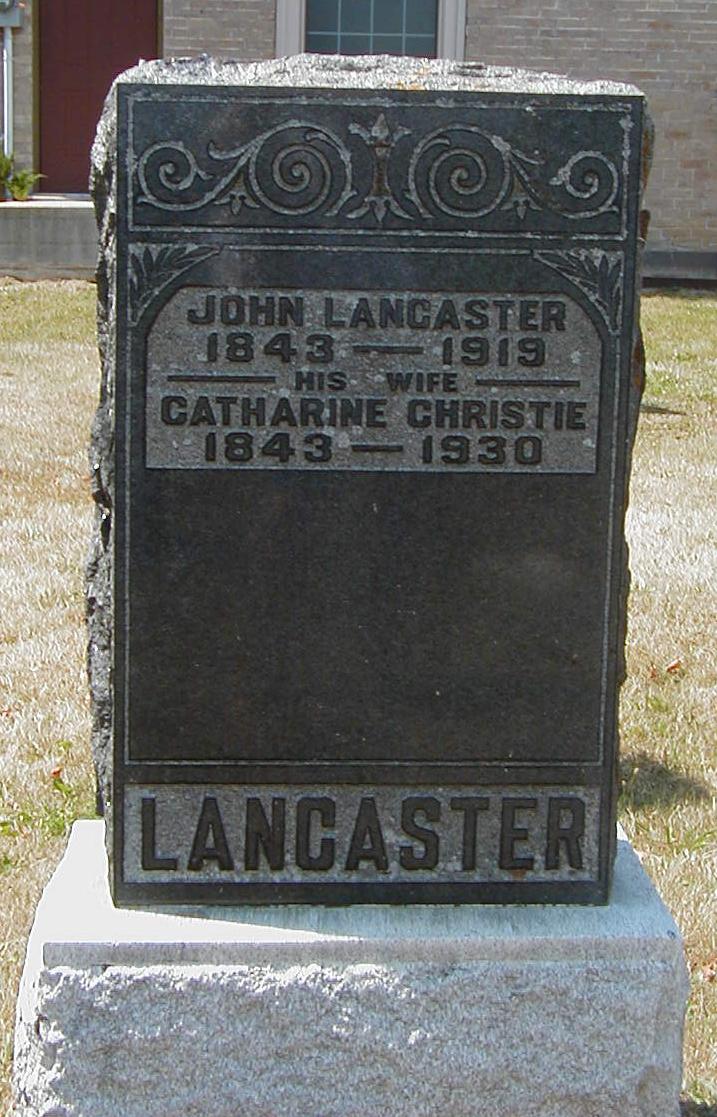 Mary, daughter of John and Jane (Atkinson) Lancaster was born in 1846 in Lancashire, England. As a young woman in March 1871, she married Joseph Faux. He was born in 1842 in Otonabee Township, a son of Thomas and Ellen (Keefe) Faux. Mary and Joseph had two sons and a daughter. Mary (Lancaster) Faux died in February 1887. Joseph Faux died in October 1911. They rest in the Westwood Cemetery.

Christopher, son of John and Jane (Atkinson) Lancaster was born in Lancaster, England on 6 October 1847. He was but a toddler when the family immigrated to Canada West. He completed his elementary education in the schools in Otonabee Township, where his family made their Canadian home. As a young man, he married Jane Knox Christie at the church in Westwood on 18 January 1871. Jane was born 6 July 1848 in Asphodel Township, a daughter of Hugh Christie and Jane Knox Cameron. This was the second marriage between the Lancaster and Christie families. Catherine Christie had just two years earlier, married John Lancaster, older brother of Christopher.

In the 1870s, Christopher and Jane made their home in Otonabee Township but near the boundary of Asphodel Township. Christopher had a business partnership with his brother, Thomas. They operated a general store in the village of Westwood. During this decade three sons were born to Jane and Christopher. John William was born
12 March 1872. Hugh Christie was born 22 February 1874 and Thomas Percival was born in 1876. 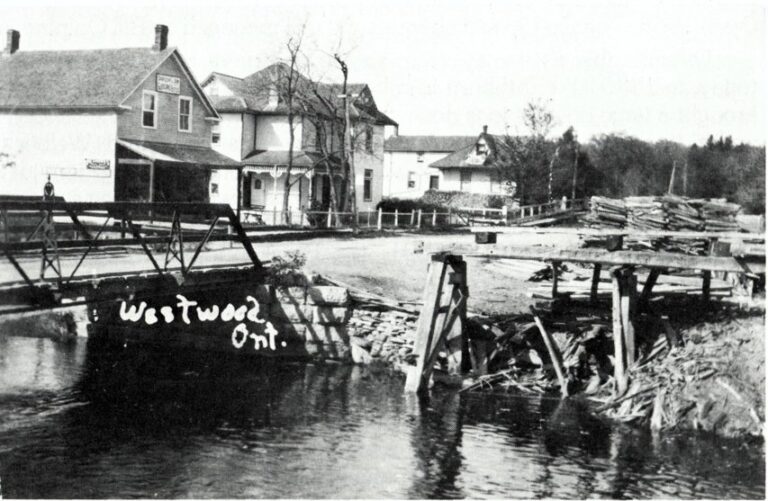 A view of Westwood looking west. On left is the store built by James Fife about 1848
and later owned by Christopher and Thomas Lancaster.

They were successful in selling the store in January 1878. Thomas and Christopher then dissolved their business partnership. 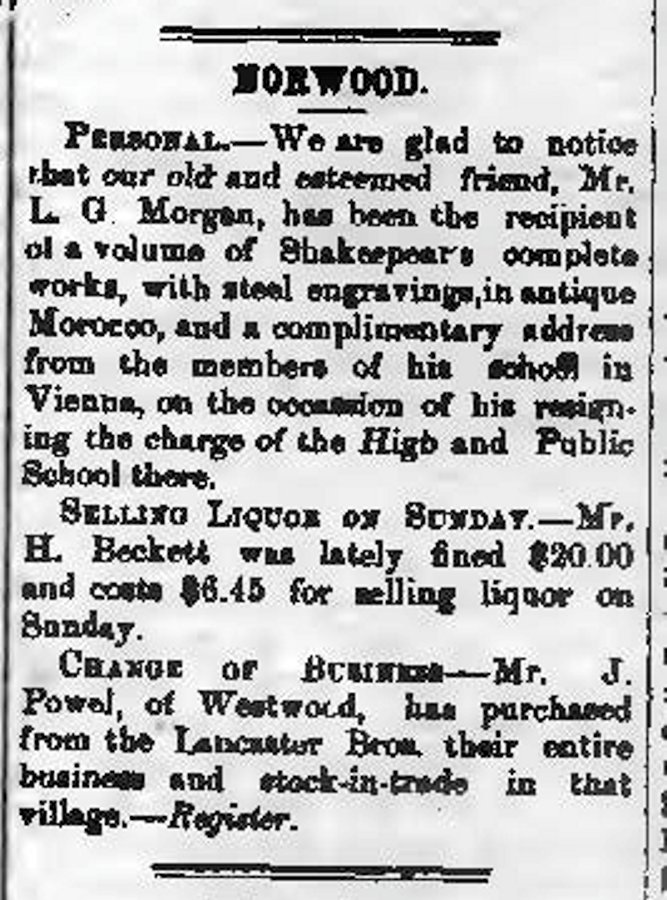 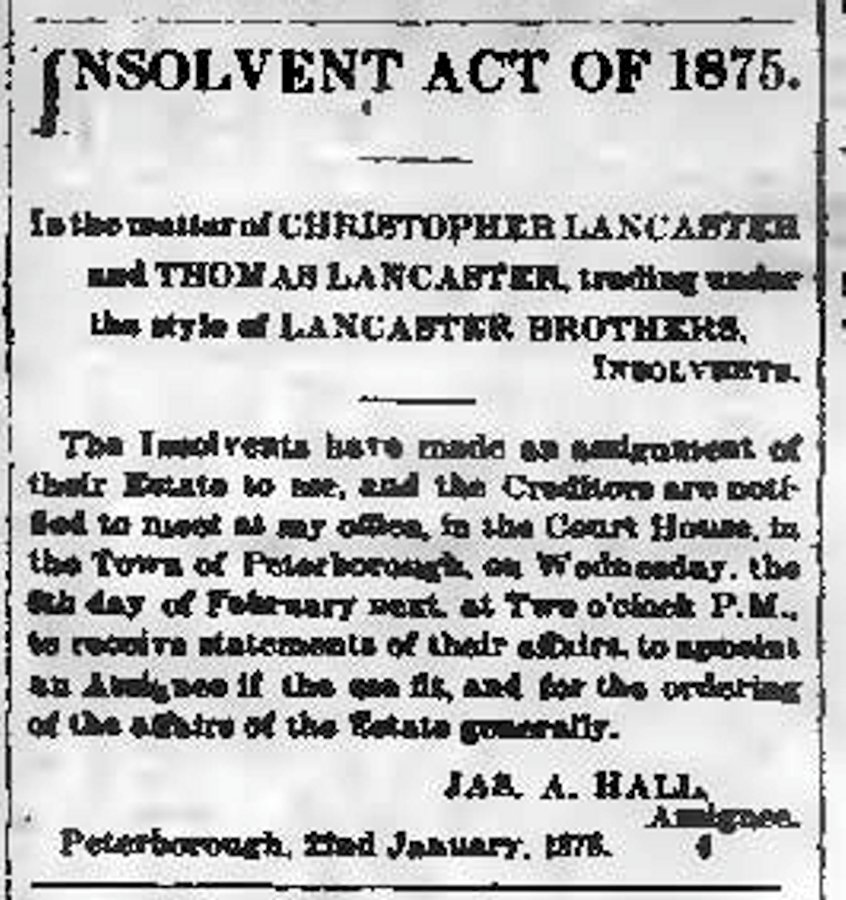 After the family moved to the village of Hastings, three more children were born to the family. They were Christopher Montague, Eva Robert and Edward Earl.

Christopher Lancaster Sr. unexpectedly died on 11 December 1888. It seems he had a severe congestive cold or perhaps came down with pneumonia. His wife, Jane Knox (Christie) Lancaster died 8 March 1905. Her obituary appeared in the Peterborough Examiner of 13 March 1905. 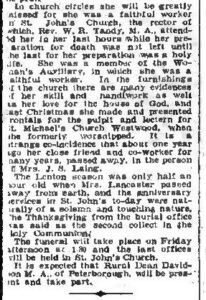 John, son of Christopher and Jane (Christie) Lancaster, was born 12 March 1872 in Otonabee Township. As a young man John went to work for the Canadian Pacific Railway (CPR). He was on board the train involved in a disastrous wreck near Proton Station in Toronto Junction Township on 11 August 1901.

The train was traveling near a speed of 50 miles per hour on a down grade section of line when the engine jumped the track. The engine first slid down an embankment then rotated back onto the track where it was struck by several of the other oncoming cars.

John, one of at least three brakemen on the train, was on the thirteenth car when the engine left the rails. He was thrown into the debris of wrecked cars and pinned there for four hours until the auxiliary arrived to dig him out. John had internal injuries along with a hurt shoulder. He was removed to the hospital at Owen Sound and, it was thought he had a good chance of recovery.

Of 27 cars on this train, 15 left the track and were involved in the wreckage. By August 12th, it was reported that one of the other brakemen, William McCraw, had died of his injuries. John Lancaster was now reported to be in a critical state and his recovery was uncertain. He lived another two days, his death occurring on 14 August 1901 at Owen Sound.

John was laid to rest in the Maple Grove Cemetery at Havelock, Ontario. 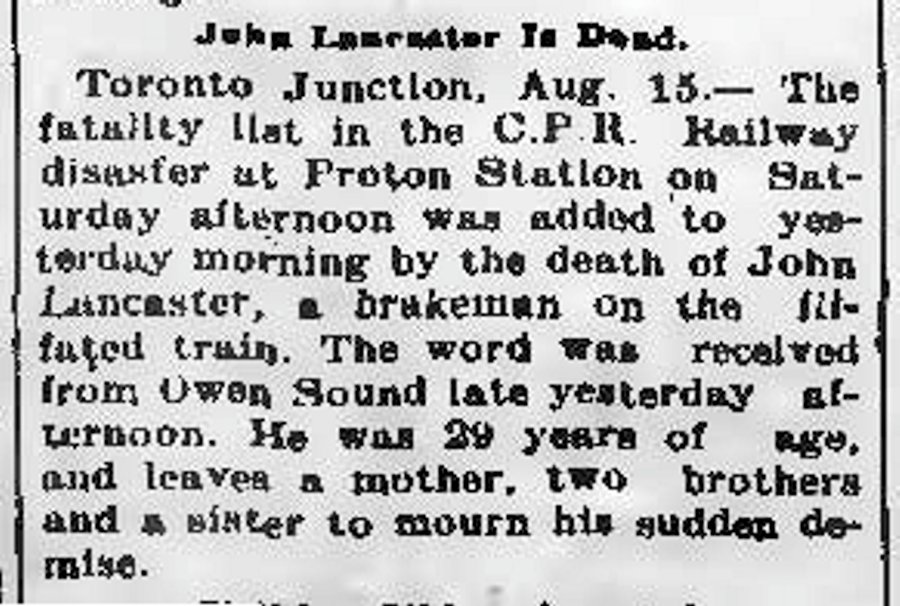 Hugh Christie, son of Christopher and Jane Knox (Christie) Lancaster, was born 22 February 1874 in Asphodel Township. In his early twenties, Hugh went west to the province of Alberta. There in 1906 he married Florence Evelyn Courteney. She was born 3 June 1878 in Greater London, England. They had a family of five daughters and one son. The girls were Eva, Gladys, Muriel, Meta and Elsie. Their son was Hugh Lancaster Jr.  Eva (Courteney) Lancaster died in Calgary, Alberta on 27 February 1931. Hugh Christie Lancaster died at Pincher Creek, Alberta on 7 January 1942. They rest in the Fairview Cemetery at Pincher Creek.

Thomas Percival, son of Christopher and Jane Knox (Christie) Lancaster, was born at Westwood on 18 July 1877. Known in the family as Percy, he married late in life to Cora Mabel Waller. She died in 1963.

In 1897, Percy became the owner and editor of the Havelock Standard newspaper. He continued as its publisher until 1939.

From 1929 until 1937, Percy represented the ridings of Peterborough County and Peterborough (city) in the Ontario Legislature.

He died 11 October 1968 at Campbellford, Northumberland County. Percy rests in the Maple Grove cemetery, alongside his brother John and their mother, Jane.

Christopher Montague, son of Christopher and Jane Knox (Christie) Lancaster, was born in the village of Hastings, Ontario on 30 November 1880. Known as Monty, he died at the age of just 2 months, on 24 January 1881 and was buried in the Westwood Cemetery. The marker for this little infant son, is old, laying flat on the ground and disintegrating.

Eva Roberta, daughter of Christopher and Jane Knox (Christie) Lancaster, was born 6 September 1883 in Hastings, Ontario. She was barely old enough to begin school when her father suddenly died in 1888.

Eva was part of the Havelock Amateur Actors in 1905. That year the group performed “The Haunted Mill” in which she had the part of ladies’ maid to one of the play’s main characters.

On 29 September 1910, at Havelock, Eva Roberta Lancaster became the wife of John Alfred Moffatt. John was born in Parry Sound, Ontario, on 7 February 1884. He was a son of John and Jane (Crisp) Moffatt. Their wedding was given an extensive accounting in the local newspaper, the Peterborough Examiner.

Eva and John made their home in Toronto. They resided at 849 Bloor Street in 1911. The following year, they lived at 219 Delaware Avenue. It was here that their daughter, Marjorie Estella, was born on 8 April 1912. By 1921, the family had moved to London, Ontario. Here John and Eva were to remain the rest of their lives. She died in London on 5 September 1950. John died there on 29 November 1961.

Earl Edward, son of Christopher and Jane Knox (Christie) Lancaster, was born 6 August 1886 in Hastings, Ontario. In 1905, Earl worked with his brother Percy in printing the Havelock Standard newspaper. In 1910, Earl resided in Port Hope, Ontario. In 1911, Earl was living in Qu’Appelle, Saskatchewan where he continued to work as a printer. In 1921, Earl and Mable resided in Tilbury, Essex County, Ontario, where he was a publisher.

The date of death for Earl and Mable has not been established.