Connections of the Hewie Family

John Hewie, born about 1800 in Scotland and his wife, Jane Robertson, born about 1804 in Scotland, came to Upper Canada in the early 1840s. They took up land Peterborough County being the east half of Lot 18 in Concession 2 in Otonabee Township. 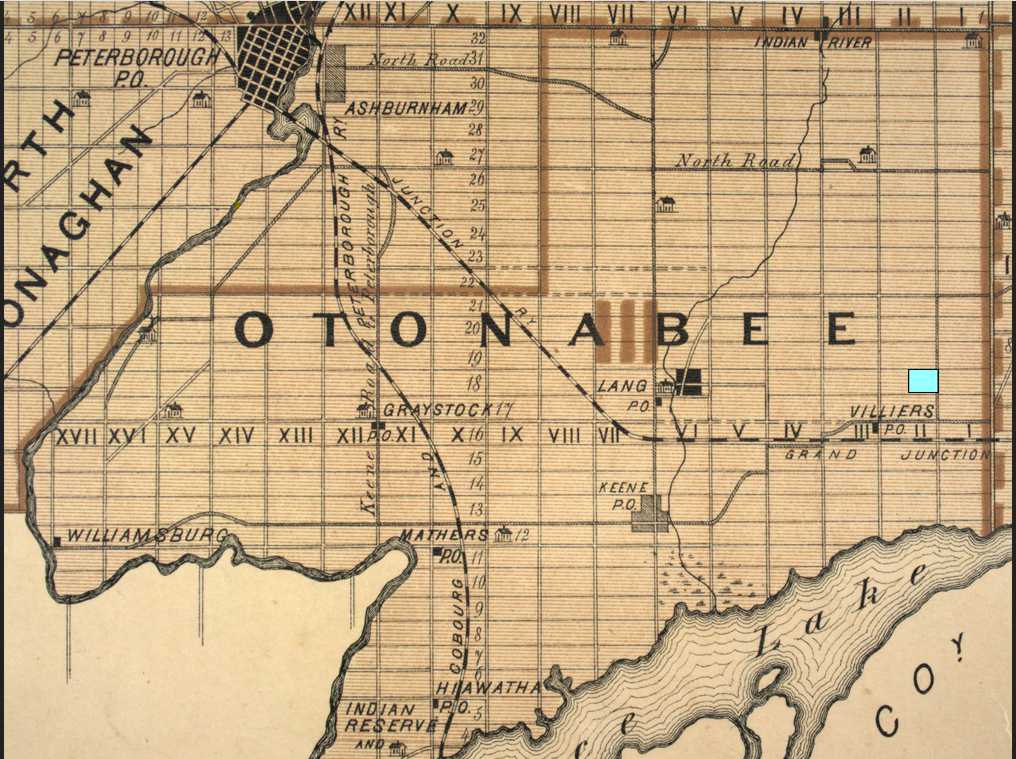 Within a year of the family’s arrival, eldest daughter Elizabeth, married. Her husband was Thomas J. Blezard, born 1815 in Lancashire, England. Elizabeth and Thomas eventually moved to Percy Township, near the village of Warkworth, Ontario.

In the mid 1850s, sons, James and William both married. James was married to Margaret Ann Nesbitt, born 12 July 1831 in Scotland. She was a daughter of Alexander Nisbett and his wife, Isabella Learmoth. They had come from Berwickshire, Scotland and settled at Indian River, in Otonabee Township, Peterborough County.

William, son of John and Jane (Robertson) Hewie, married Agnes Renwick on 11 June 1856, in Peterborough, Ontario. Agnes was a daughter of William and Ann (Clark) Renwick who also came from Roxburghshire, Scotland.

James and William Hewie acquired land in Fenelon Township, James taking the west half and William the east half of Lot 14 in Concession 6 of the township. Both young men settled on their Fenelon land with their wives and children sometime shortly before the census that was taken in 1861. 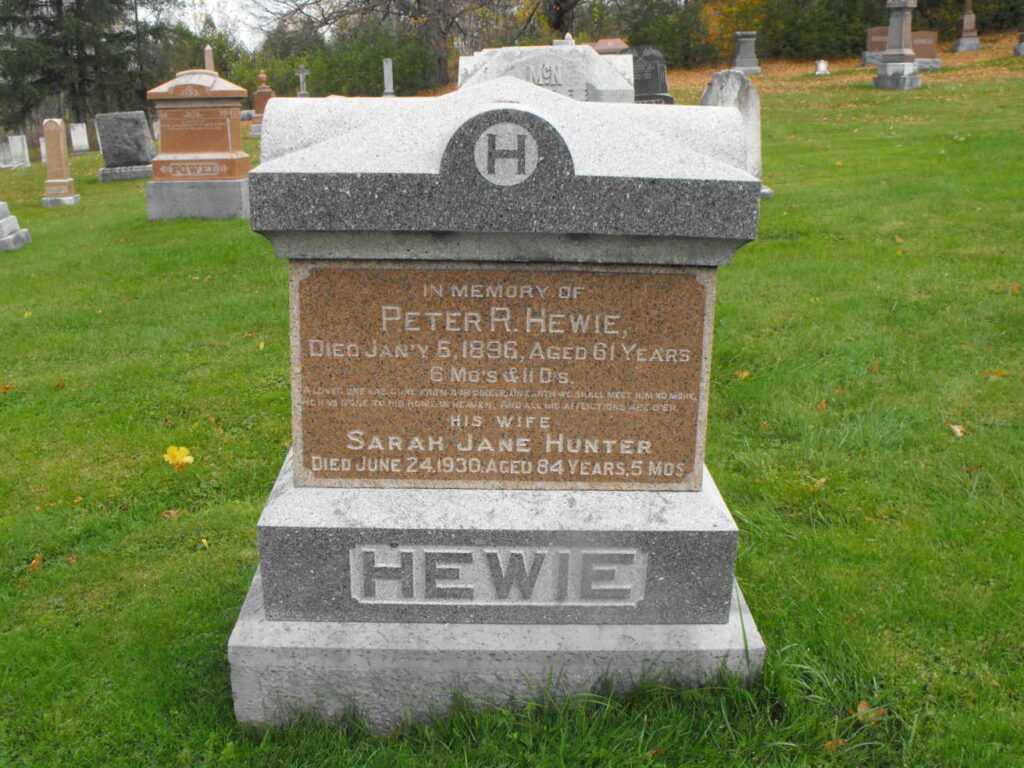 Peter, son of John and Jane (Robertson) Hewie, did not marry until 1877. His wife was Sarah Jane Hunter, born 9 January 1846 in Otonabee Township. She was a daughter of Joseph and Hannah (Thackeray) Hunter who were also early settlers in the township.

Margaret Hewie, daughter of John and Jane, married in 1859 to John Reid. They were wed in Peterborough on 10 June 1859 and afterwards settled in the hamlet of Westwood, Asphodel Township, Peterborough County.

Andrew, the youngest son of John and Jane Hewie, married Esther Kersel. She was born in December 1837 in Roxburghshire, Scotland, a daughter of Adam and Margaret (Dryden) Kersel. Esther had previously been married to George Davidson who died about 1870. Andrew and Esther lived in Peterborough. After her death in 1883, Andrew Hewie married secondly, to Sarah Jane Ventress. Andrew and Sarah were married in January 1889.

It is the families of James and William Hewie of Fenelon Township who are of key interest to this family story. James and his wife, the former Margaret Ann Nesbitt, lived on the west half of Lot 14 Con 6 in the township, during the 1860s.

Their first child was a son born in 1857. They named him William. In 1860, a daughter, Jane Isabella was born and after her, another daughter,  Margaret was born in 1862.  The third daughter born to the family was Elizabeth in 1864. 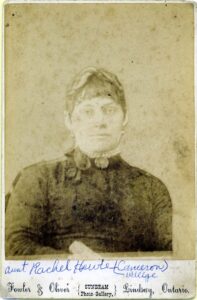 Rachel Agnes Hewie was the next child born to James and Margaret. Rachel was born 19 October 1866. Sadly she had a very short life time. Her death occurred at the family home in Fenelon Township on 19 July 1886, the cause being tuberculosis. As a young woman, Rachel had her photograph taken by Fowler & Oliver of the town of Lindsay.

Fowler & Oliver operated as a company in Lindsay from 1885 until 1887. Thus the photo of Rachel was likely taken in 1885 or early 1886 as her death occurred in July of the latter year.

The youngest child in the family of James and Margaret Ann (Nesbitt) Hewie was Thomas. He was born about 1869 and on 3 July 1895 at Lakefield, Ontario was married to Jane, daughter of Robert and Susan Tedford.

James Hewie died at his home in Fenelon Township on 5 April 1889. His remains were interred in the Eden Cemetery, nearby in Mariposa Township. His wife, Margaret Ann (Nesbitt) Hewie continued to live at their Lot 14 Concession 6 property until her death there on 5 November 1910. She was laid to rest next to her husband in Eden Cemetery.

William, son of John and Jane (Robertson) Hewie, lived on the other 100 acre property facing that owned by James. William and his wife, the former Agnes Renwick, had the east half of Lot 14 Concession 6 in Fenelon Township. A family of ten children were born to William and Agnes. In 1856, a daughter, Annie, was born. In 1859, a son, John Robert, was born. He was followed by another son, William, in 1861. In 1863, Jane was born, then in 1865, Margaret Mary was born. In 1868, another son, Walter James was born, followed by Peter in 1871. Elizabeth Ellen was born in 1873. The youngest two children in the family were Robert born in 1877 and Albert Wesley born in 1881.

Agnes and William farmed their land throughout the years they were raising a family. Agnes (Renwick) Hewie died in July 1882, as result of consumption. William continued to manage the farm, but in April 1895, he also passed away. William and Agnes rest in Eden Cemetery, Mariposa Township.

Annie, eldest child of William and Agnes, was married in January 1875. Her husband was John Henry Maunder, born in 1856 in Mariposa Township. They had a family of four children.

John Robert, born 12 October 1859, son of William and Agnes (Renwick) Hewie married Mary Parnell. She was born 12 August 1862 in Cavan Township, Canada West. They had a family of three daughters.

William, born in 1861, was the second oldest of the sons of William and Agnes (Renwick) Hewie.  The year 1906 was a remarkable one for young William. It was in that year he purchased a small General Store in the hamlet of Cameron. The store would remain under his operation from then until he retired at which time the running of the store was continued on for many years by William’s son Clayton. During an interview in 1954, William at age 93 was still very much involved in running the store. By then he had been in business a total of 47 years and was considered one of Canada’s oldest grocers. 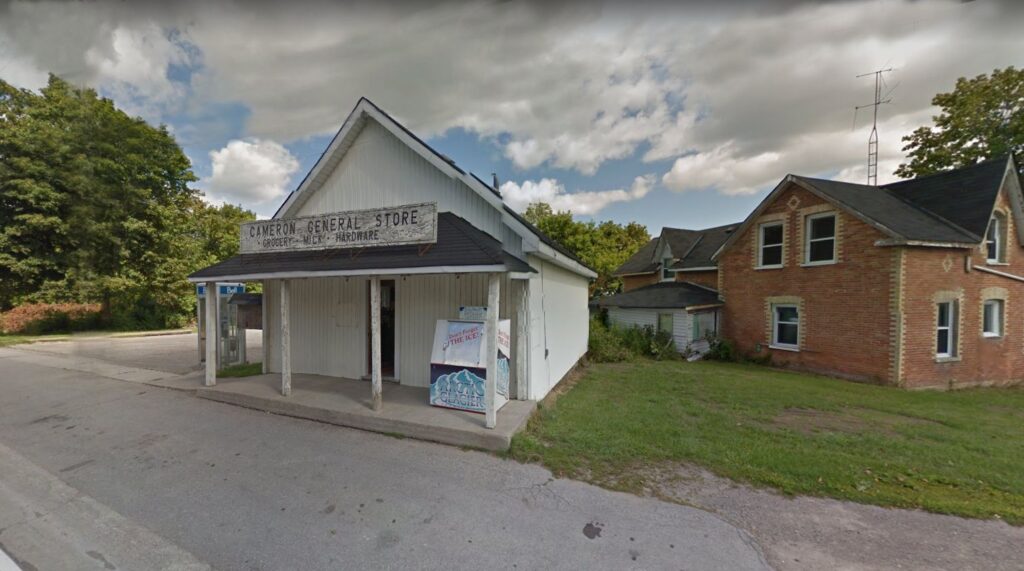 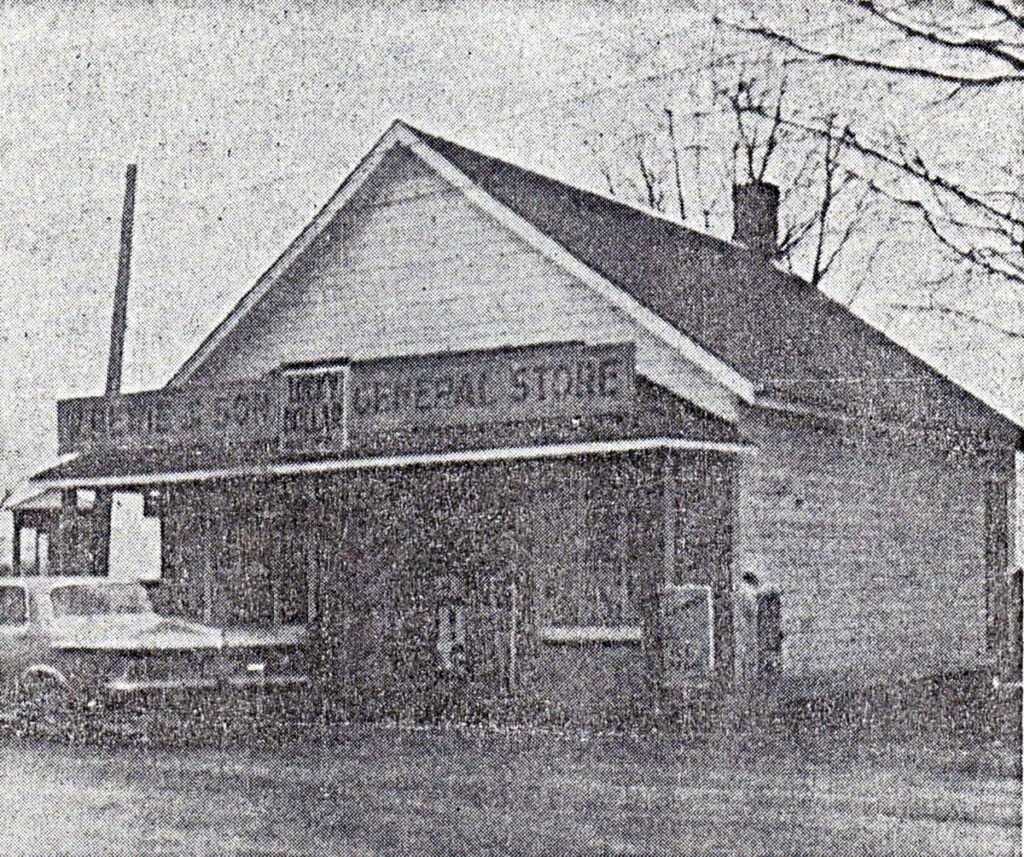 In total the Hewie General Store continued in the family for 59 years. In 1965, the family business was sold to a Willowdale, North York, Ontario, man by the name of Leland McIntyre.

Aside from his business venture, started in 1906, that year was significant in another way for William Hewie. On 3 November 1906 at Lindsay, Ontario, he married Janet McKee, daughter of George and Janet (Hamilton) McKee. In that year, Janet resided in the city of Toronto but returned to her mother’s home in Somerville Township in preparation for the wedding ceremony. The photograph of Janet McKee, wife of William Hewie, is actually labelled “Bella McKee, Mrs. Will Hewie, Cameron”. No other records were found identifying Janet as either Isabel or Bella, so perhaps it was a name familiar only within the family. 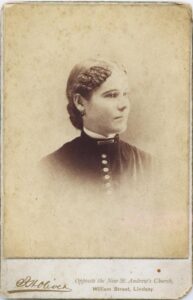 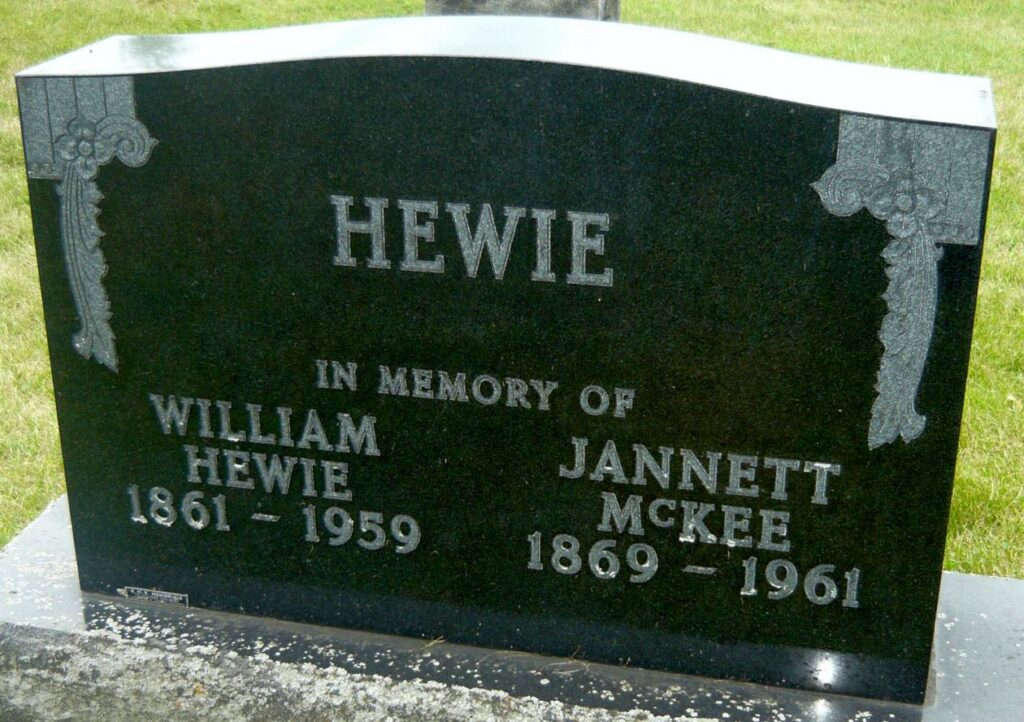 William and Janet lived in Cameron their entire married lifetime. They raised two children, Gwendolyn, born in 1907 and William Clayton, known by his second name, born in 1910. William Hewie Sr., died in 1959. His wife, Janet (McKee) Hewie, died in 1961. They rest in Eden Cemetery, Mariposa Township.

Jane, daughter of William and Agnes (Renwick) Hewie, was born in 1863 at the family home in Fenelon Township. On 13 March 1889, Jane married Wesley Chidley, son of James and Grace (Maunder) Chidley. Wesley was born in Mariposa Township on 21 February 1865. He and wife, Jane, raised a family of six sons and one daughter. Wesley died 2 June 1945 in Little Britain, Mariposa Township. Jane died 5 February 1949. They rest in Little Britain Christian Cemtery.

Margaret Mary, daughter of William and Agnes (Renwick) Hewie, was born in Fenelon Township in 1865. She became the wife of Wesley James Perrin, son of Joseph and Almira (Richardson) Perrin. Wesley and Margaret married in Fenelon Township on 27 March 1894. They had a family of two sons and three daughters.

Wesley and two of his brother in laws, William and Peter Hewie, were all celebrated local fiddlers. On the occasion of his brother, Joseph Perrin’s 80th birthday, Wesley, William and Peter got together for a long evening of old time fiddling music. At the time, Wesley was 86 years old, his playing partners Peter and William were 84 and 95 years of age respectively. The three men entertained at the birthday celebration until 2 a.m. in the morning.

Wesley James Perrin died on 24 January 1967. His wife, Margaret Mary (Hewie) Perrin had predeceased him many years earlier, her death occurring on 12 October 1942. They are buried in the Eden Cemetery, Mariposa Township.

Walter James Hewie was the next child of William and Agnes (Renwick) Hewie. Walter was born in 1868 and died in 1942. He did not marry. 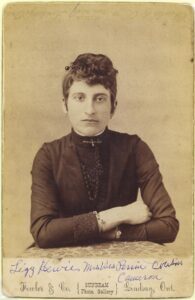 Peter, son of William and Agnes (Renwick) Hewie, was born in 1871 in Fenelon Township. Peter married Annie Matilda Ingram and they had three daughters and one son.

Elizabeth Ellen, daughter of William and Agnes (Renwick) Hewie, was born in Fenelon Township in 1873. She is the young woman in the photograph at left, taken by Fowler & Company of Lindsay.

Another photograph of Elizabeth, was taken at the John B. Cook studio in Toronto.  John Bartholomew Cook was a photographer in the city from 1881 until the early 1900s. His studio was located at 366 Yonge Street during the years 1895 through 1897. Thus Elizabeth was 22 to 25 years old when the photograph  by John Cook was taken.

On 27 September 1905 Elizabeth married Joseph Asa Perrin. As it happened, Joseph was the brother of Wesley Perrin who married Elizabeth’s sister Margaret.

Elizabeth, known also as Lizzie, farmed with her husband Joseph in Fenelon Township. They raised a family of two sons and a daughter. Their older son, Ross, was a child of Joseph’s first marriage to Beatrice Estella Maunder. Beatrice died shortly after the birth of her son, Ross in 1903.

In 1947, the family suffered a loss when Elizabeth Ellen (Hewie) Perrin died at the age of 74 years. Her husband, Joseph Asa Perrin, lived to the age of 93 years. His death occurred in 1968. Joseph and Elizabeth rest in the Eden Cemetery, Mariposa Township. 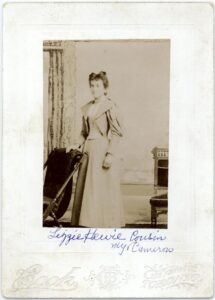 Robert Andrew, the second youngest child of William and Agnes (Renwick) Hewie, was born in 1877. He married Florence Luella, daughter of Richard and Amelia (Tompkins) Westaway. They farmed on Lot 13 Con 6 in Fenelon Township and raised a family of two sons and a daughter. Robert died in 1951. Florence died in 1961. They rest in Eden Cemetery, Mariposa Township.

Albert Wesley was the youngest child of William and Agnes (Renwick) Hewie. Albert was born at the family homestead on 31 October 1881. He did not marry. Albert died of Tuberculosis on 15 February 1934 at the family home on Lot 13 Concession 6 in Fenelon Township. 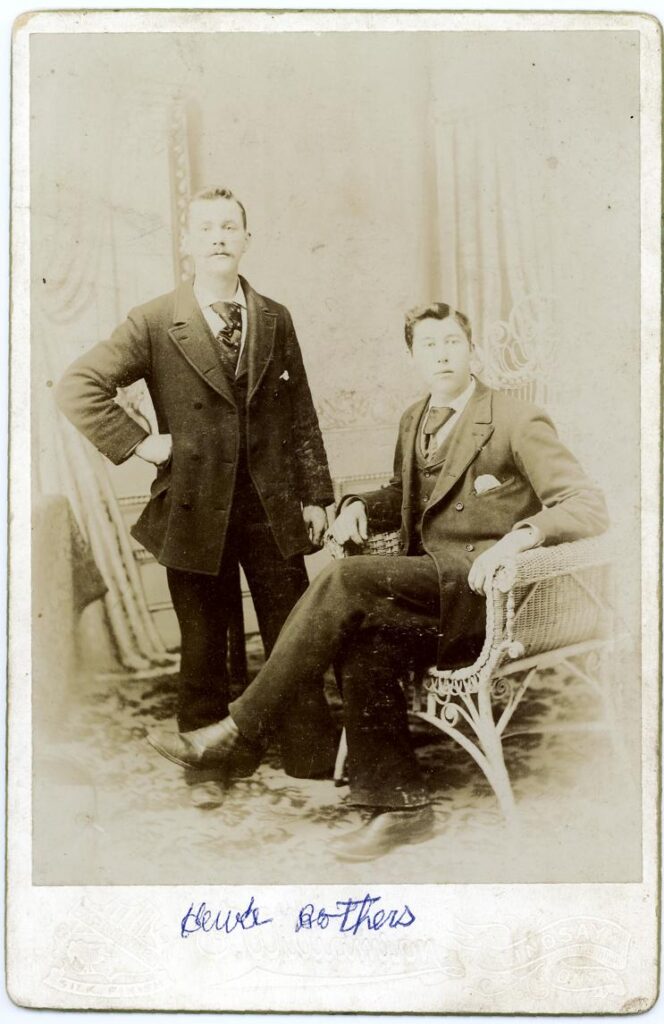 One final photograph of two Hewie family members has not yet been identified. Labelled simply as “Hewie Brothers” it was taken by Eli Williamson, a photographer in Lindsay, Ontario. Eli Williamson was a photographer in business in Lindsay from 1881 through until around 1911. In 1921 he was living in the town of Indian Head, Saskatchewan. It is probable that he returned to Ontario at a later date. He died in 1942 and is buried in Riverside Cemetery, Lindsay.

The two young men in the photograph may be the sons of James and Margaret Ann (Nesbitt) Hewie. Their eldest boy, William Hewie, was born in 1857 and their youngest, Thomas, was born in 1869.

Or, the two young men in the photograph may be sons of William and Agnes (Renwick) Hewie. They had six boys, which means there are a number of possibilities for who posed for this photograph taken by Eli Williamson.