In the latter 1800s, there were many challenges in the lives of families. Often the death of parents left children without care givers. Even the early death of one parent could result in the children being taken to the orphanage. The surviving parent could not work all day and also be available to care for the little ones.

In the early 1890s, orphaned children of Catholic families in the Peterborough area, were cared for at St. Joseph’s Hospital. In 1891, three children had their home at St. Joseph’s hospital. These included two little brothers, Thomas and Arthur Germain. Thomas was 11 years old, his brother was 9 years. The other child living at the hospital was Leo Connelly, aged two years. 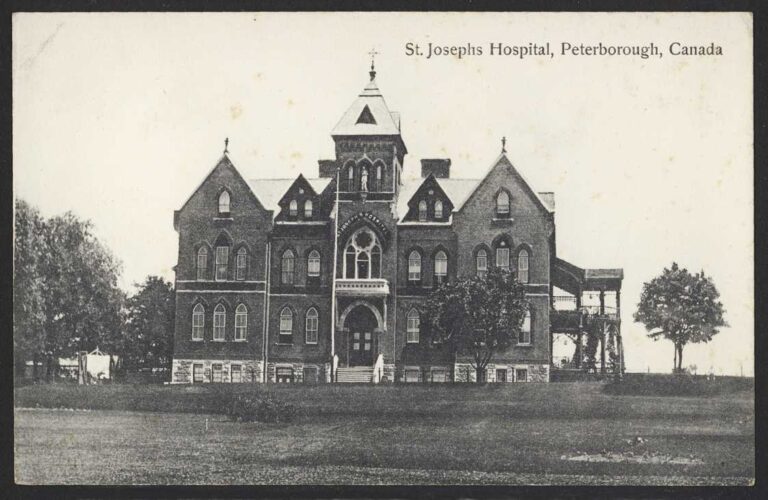 In the later years of the same decade, children lived and were cared for at the House of Providence, a home for the elderly. In time, the number of children in need of care steadily increased.

In 1899, Bishop R. A. O’Connor decided to build the House of Providence. It would be a home where elderly people could reside. Here they would receive support and light medical care as needed. The home opened on 27 July 1900.

In the first decade that the home operated, children, in need of care, also resided at this home. In 1901 eighteen children were living at the House of Providence.

In 1909, the Bradburn Estate on London Street, was acquired by the Sisters of St. Joseph. It was purchased, for use as an orphanage, due to the increasing numbers of children without families to look after them. At the home, care was provided for children between 2 and 16 years of age.

When the newly acquired house opened, a short item appeared in one of the local newspapers. The Peterborough Examiner, of 5 November 1909, applauded the renovations made to the house. It was now well adapted for the purpose of giving care to children. 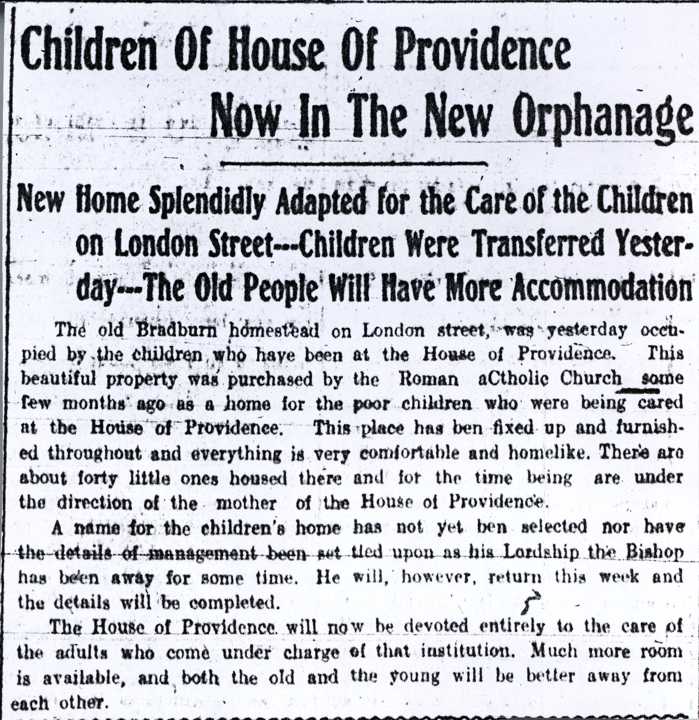 The home opened in November 1909, though it had not yet been given a name. Soon it was called St. Vincent’s Orphanage. For the next forty-seven years, the Sisters of St. Joseph cared for orphaned children in this home. At times in the 1930s and 1940s, there were as many as forty children living in the orphanage. 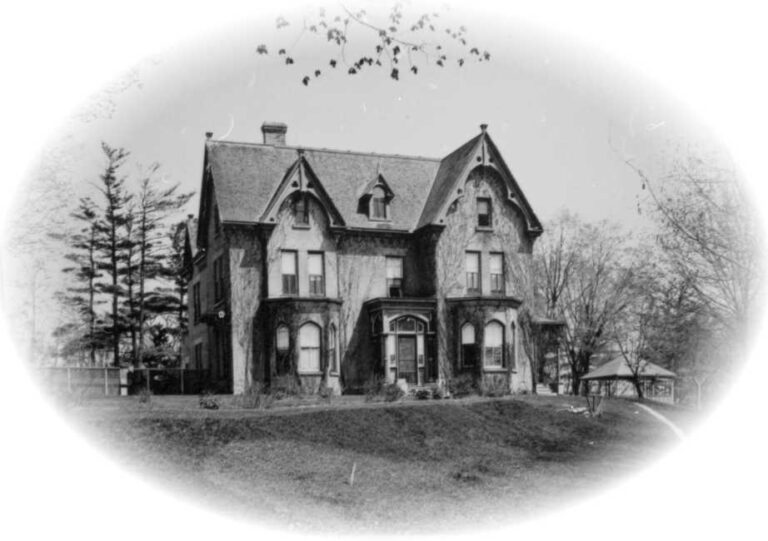 By 1911 there were more children residing at St. Vincent’s. It was now home to thirty-five young people.

Loss of a Parent Brings Children Into Care

Three children from a Lennox family were living in the home in 1911. They were the children of John S. Lennox and his wife, Fannie C. Hudgins. The family resided in Dummer Township until John’s death on 22 March 1901.

The McGregor children were another family group in care at the orphanage. They were members of the family of William McGregor and his wife, Margaret Murphy. William and Margaret had married in 1897. He had employment as a barber and the family lived in the village of Ashburnham. The  death of William was a great loss to the family. He died on 26 March 1907.

Increasing Numbers of Children In Care

As another decade passed, other children came to live at St. Vincent’s. As many as forty-five children lived at the home during the first years of the 1920s.

Re-discovering the Families of Orphaned Children

The Allen children, Kathleen and Albert lived at St. Vincent’s in 1921. They were the son and daughter of James Allen and Mary Amelia Clark. Amelia died at St. Joseph’s Hospital on 2 October 1918.

Francis Barbeau, was the son of Annie Guerin and Archibald Barbeau. Annie and Archibald lived at 85 Gladstone Ave., in the city. Annie had died at St. Joseph’s Hospital on 29 April 1919.

William Francis Blair, was born in 30 September 1912. He was a son of John Edward Blair and his wife Agnes Huard. Agnes was first married to John Fallon. After his death she married John Edward Blair in November 1912. Agnes (Huard) Blair died at St. Joseph’s Hospital on 22 October 1916.

The Crebar children were of the family of Vincengina Infuso and Vincent James Crebar. Vincengina, born in Italy, had died of pneumonia, at St. Joseph’s Hospital on 12 December 1919.

The Hanrahan children, Agnes, Alphonse and Leo, are part of the family of Michael Joseph Hanrahan and Emily Elizabeth Bowell. These three are the youngest of a family of seven children. It appears that Emily may have died and Michael needed help caring for the little ones.