Annie Pearl Martin’s family has roots back to England. However, it is through her Ontario connections that we find the facts of interest for this sketch. Her grandfather, John Martin came from England to Upper Canada. Here he married Lanier Yeoman. She was born in Upper Canada about 1827. Both her given and family surnames are found with many variations: Elana, Lanier, Lana and Yeomans, Youman and Youmans are but a few examples.

A son, Henry Nelson, was born in 1848, which places the event of his parents’ marriage around the mid 1840s.

By 1871, John and Elana resided in Hungerford Township of Hastings County. They now had a family of seven children. Richard was 13 years; Jane was 11; Henry aged 9 years; Sarah aged 8; James aged 7 years; John five years old and Nancy was 2 years.

In the 1880s, John and Lana lived in Sheffield Township of Addington County. A teenager during these years, James now went by his second name of Harvey and would maintain this name throughout his adult lifetime.

By the late 1880s, Harvey had settled into family life with Amy Woodcock. By the early 1900s they had a family of thirteen children. Curiously, Harvey and Amy did not solidify their marital relationship until 12 June 1918. Harvey was then 53 years old and Amy was 56 years. Both parties to the marriage indicated they had been born in the village of Tweed, Ontario. Amy gave the names of her parents as William Woodcock and Mary Ann Purdy.

Harvey and Amy lived in Peterborough throughout many of their years together. In 1948, Harvey became ill, his health deteriorating over the next two years. He was taken to the hospital in Kingston, Ontario where he died on 30 September 1950. His remains were returned to Peterborough for interment at Little Lake Cemetery. 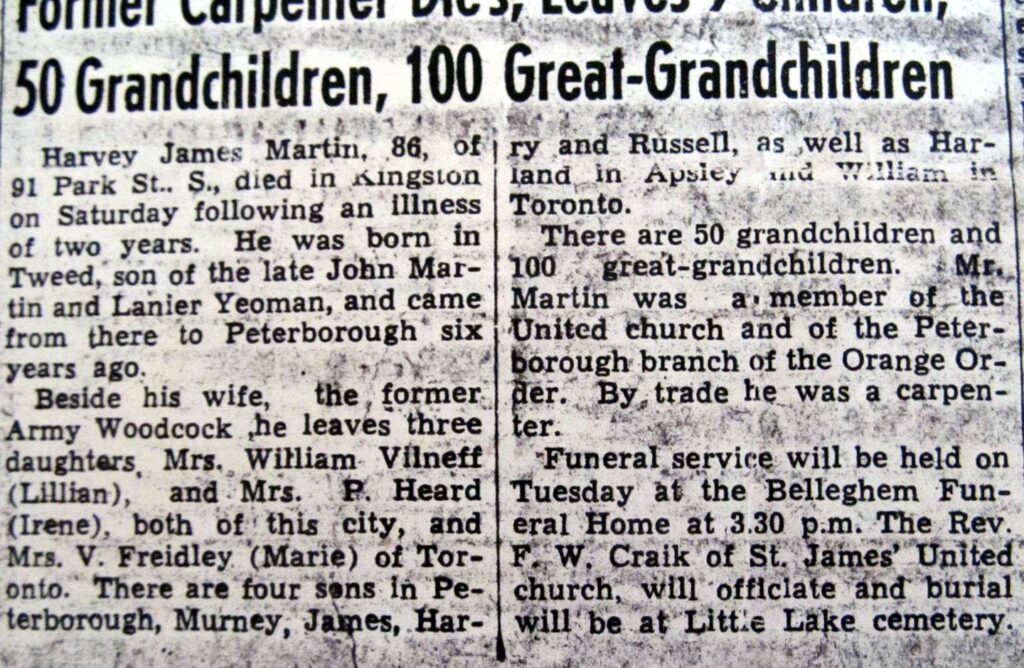 Murney, son of Harvey and Amy (Woodcock) Martin, was born 21 March 1887. As a young man, he married Minnie Irene Wilkins. She was born 14 March 1898, in Irish Creek, Wolford Township, Leeds & Grenville County, Ontario. Minnie was the daughter of Frank Wilkins and Rose Ann Dodds. Murney and Minnie were married in the Algoma District , Ontario on 16 January 1916. By 1921, Murney was again living in his parents’ household. Minnie had died sometime in the past five years. In September 1932, at Toronto, Murney married Muriel Clayton. She was a daughter of John and Beatrice Clayton.

Maude, daughter of Harvey and Amy (Woodcock) Martin, was born 21 February 1890 at Campbellford, Ontario. On 19 December 1905, at Tweed, Ontario, she married John Masters. He was the son of Sylvester Masters and Mary Vilneff.

James, son of Harvey and Amy (Woodcock) Martin, was born 12 June 1891. James married Annie Lillian Nicholson who was born 21 March 1898 in Belmont Township, Ontario. Annie was the daughter of Alfred Nicholson and Eva Azelia Munro. In 1921, James and Annie lived in Peterborough where they made their home with his parents. By this date, James and Annie had two children, Gladys who was 2 years old and Maria who was just 10 months. Annie Lillian (Nicholson) Martin died on 26 September 1936 in Peterborough. Her remains were interred at Little Lake Cemetery two days later.

Harry, son of Harvey and Amy (Woodcock) Martin, was born9 December 1892 in Tweed, Ontario. He married Marguerite Madeline Young on 28 November 1917, at Peterborough. Marguerite, born in 1898 in Bridgenorth, was the daughter of Joseph Young and Josephine Gravelle.  Marguerite died of tuberculosis, at the Ontario Hospital in Woodstock, Ontario on 19 December 1929.

William, son of Harvey and Amy (Woodcock) Martin, was born 6 January 1897 in Tweed, Ontario. He married Gladys Dowdell at Peterborough on 17 Mary 1919. Gladys was born in Peterborough in 1901, a daughter of William Bradfield Dowdell and Mary Martin.

Marie Mary Armeline, daughter of Harvey and Amy (Woodcock) Martin, was born 22 March 1902 in Tweed, Ontario. She married Vernon Friedly on 9 November 1920 at Hamilton, Wentworth County, Ontario. Vernon was born in 1897 in Houston, Texas, a son of James Howard Friedly and Anabell Kinkade.

Ida Irene, daughter of Harvey and Amy (Woodcock) Martin, was born 20 April 1905 in Tweed, Ontario. On 17 March 1926, at Peterborough, Ida married Thomas Percy Heard, son of James Henry Heard and Ida May Cummings. Thomas and Ida lived in the Lakefield area raising a family of six children, one of whom died in infancy. Ida died 4 October 1986 and Thomas died 9 June 1970. Their remains were interred in Lakefield Cemetery.

Helena Mildred, daughter of Harvey and Amy (Woodcock) Martin, was born 6 August 1906 in Tweed, Ontario. She died 26 May 1907 in Hastings County.

Russell, son of Harvey and Amy (Woodcock) Martin, was born 5 September 1907 in Tweed, Ontario. He married Edith Maud Sage, on 4 April 1932 at Peterborough. Russell died on 6 May 1979 and Edith died on 28 June 1992. They rest in Little Lake Cemetery, Peterborough. 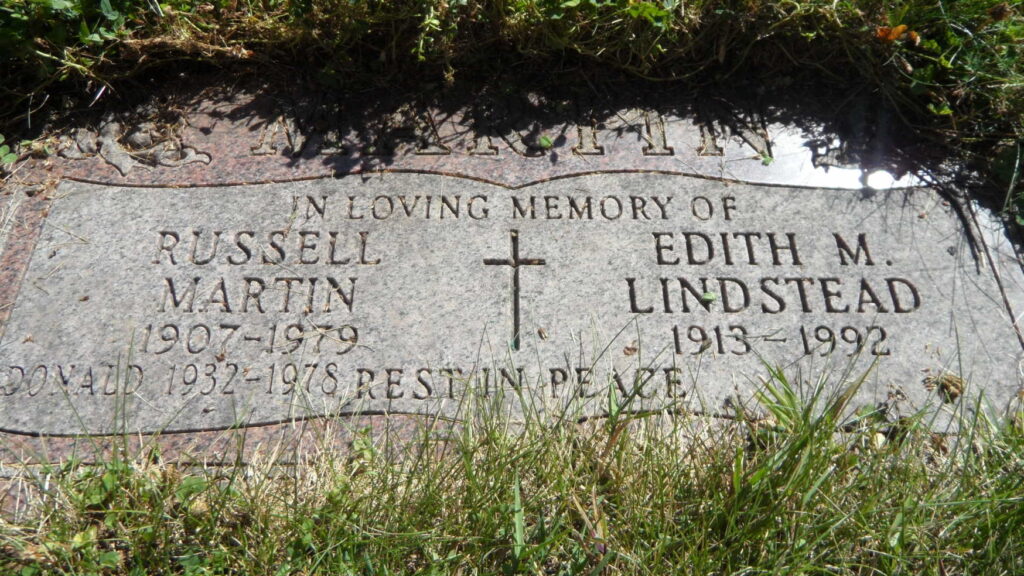 At last, we have come to Annie Pearl Martin’s story. She was actually the seventh child born to Harvey James and Amy (Woodcock) Martin. Annie Pearl was born in 1898 in Tweed, Ontario. On 30 December 1914, Annie Pearl married Albert Wellington Tamblyn. Albert’s surname is spelled Tamblin in many documents. Albert Tamblyn was born 26 July 1878 in Dummer  Township, Peterborough County.

Before his marriage to Annie Pearl, Albert had been married before. His first wife was Hannah Maria Bird, born in 1884 in Harcourt Township, Haliburton County. Hannah and Albert had six children: Victoria Elsie born and died in 1903; John Henry born in 1904; Prudence Elizabeth born in 1906; Josephine Madeline born April 1908 who died in August 1908; Muriel Mildred May, born and died in 1910 and Ina Jane, born in 1912. On 17 October 1914, Hanna Maria (Bird) Tamblyn died at Nicholls Hospital in Peterborough. She had contracted typhoid fever. With three children aged ten, eight and two years old, Albert chose to remarry shortly following the death of Hannah.

It was 30 December 1914, in Peterborough, that Albert married Annie Pearl Martin. In 1915, a daughter Gwendolyn was born to Albert and Annie Pearl. In January 1916, Albert enlisted to serve as part of the Canadian Expeditionary Force. Perhaps his marriage to Annie Pearl was not as successful as he hoped it would be. On his enlistment papers, Albert appointed his mother, Agnes Elizabeth (Parks) Tamblyn as the guardian of his three surviving children from his first marriage.

Before going overseas, Albert had a photograph taken with the children by his first wife. While away, Albert directed that his army pay be provided to his mother in trust for the care of these three children.

Albert completed his training in the spring of 1916. In July he was shipped from the Port of Halifax, to England and from there Albert’s unit was sent to France. On 8 December 1916, Albert Wellington Tamblyn died at Vimy, France.

Annie Pearl, second wife of Albert Tamblyn, had another child. This was Thelma Tamblyn, born in February 1917. Local family history relates that Thelma was placed in an orphanage in Peterborough, where she grew up. By 1921 Gwen Tamblyn was living with her grandparents on her mother’s side of the family, Harvey and Amy (Woodcock) Martin.

Annie Pearl chose to marry again after the overseas death of her first husband, Albert Tamblyn. On 27 November 1920, at Peterborough, Annie Pearl was married to Charles Wesley Weaver. Charles was born 28 June 1898 in Stirling, Hastings County, Ontario. He was a son of John Barcelona and Cinderella (Fulton) Weaver.

A son, Charles Henry, was born to Charles and Annie Pearl in 1921. Another son, Wesley Jay, was born on 16 April 1925 at Peterborough. Known as Jay, he also would serve in the military during Second World War. Returning home after the war, he married Wilhelmina Miep. A son, Leonard Kenneth was born to them in 1953 at Campbellford, Ontario.

Charles and Annie Pearl had a daughter, Ada Margaret, born 6 June 1931 at Peterborough. This little girl died at the family home on Park Street, Peterborough on 6 February 1935. Her death was caused by whooping cough and pneumonia.

Charles Wesley Weaver died on 3 May 1935 in Rawdon Township, Hasting County. No date of death was found for Annie Pearl (Martin) Tamblyn Weaver. Sometimes her death has been confused with that of her sister-in-law, Annie (Nicholson) Martin, who died in 1936 and was interred at Little Lake Cemetery.

Gwendoline, daughter of Albert Tamblyn and Annie Pearl Martin, grew up in her maternal grandparents home. When she married on 22 December 1932, Gwen gave her grandparents names as her “parents” on the marriage registration. Gwen married Vernon Joseph Outwater, son of Ira Outwater and Mary Deshane.

Thelma, daughter of Albert Tamblyn and Annie Pearl, married Francis John Crowe and 9 October 1936 at Peterborough. Francis was born in 1916, a son of John Crowe and Mary Agnes Dingman.

Charles Henry Weaver, son of Charles Wesley and Annie Pearl, died not marry. He died in Peterborough on 7 August 1948. His remains were interred at Little Lake Cemetery.