The Family of Timothy Curtin and Catherine O'Grady

Timothy Curtin was born in the Parish of St. Anne’s Shandon, Cork City, Ireland. With his wife, Catherine, Timothy attended services at the Cathedral of Saint Mary and Saint Anne. Also known as the North Cathedral, it has become the principal church of the diocese of Cork and Ross. This Cathedral, opened in August 1808 and was built upon the same grounds where, in earlier years, had stood another St. Mary’s Church.

Three children are known to have been born to Timothy and Catherine Curtin. William, born in the year 1819, was baptized in this church on 17 February 1819. Cornelius Curtin was born about 1821. David, the youngest boy, was born late in 1824 or early 1825 and baptized in the church on 26 February 1825. 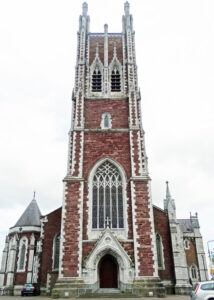 Shortly thereafter, in May 1825, the family boarded the ship Star and sailed for Upper Canada. Two of Timothy’s siblings traveled  with the family. In that year Mary Ann Curtin, was 17 years and Thomas Curtin was 15 years old. These were Timothy’s younger siblings.

After reaching Kingston by June of 1825, the settlers pushed onward to reach the young town of Cobourg. From there they walked inland several miles. On the south shore of Rice Lake, families were loaded onto flat bottom bateaux taken across the expanse of water and deposited on the north shore. From here they walked again until reaching their journey’s end at a flat land of meadow on the west side of the Otonabee River. From Cobourg to the meadow had encompassed some twenty miles on a steady uphill climb.

On the river flood plane more than a couple of thousand people, numbering some 250 or more families were encamped. While families adjusted to their temporary camps, Mr. Peter Robinson worked steadily to assign location tickets to each family’s selected land grant of 100 acres. He had the task of recording each chosen lot and concession of land and seeing the families established on their new homestead in a small log shanty. By early November 1825, almost all the families were living on their property.

Timothy Curtin chose the broken Lot 6 in Concession 2 of Ennismore Township. The term “broken” simply meant that his land ended at the water’s edge and thus on that side of his land, the boundary was not a straight or clean edge where it met an adjoining property.

Through the closing months of 1825 and on until November 1826, Peter Robinson gathered information for his report back to the British Government. He followed the progress of the many settler families through the winter of 1825-26.

Timothy and Catherine with their three children all lived on the family’s chosen homestead.With them lived Timothy’s sister and brother.

Between September and December of 1825, young William Curtin reached his seventh birthday. In the continuing quarterly reports through 1826, he is shown as being over 7 years of age. This is consistent with the entry of the parish register of St. Anne Shandon, Cork, Ireland that shows William being baptized on 17 February 1819.

Catherine (O’Grady) Curtin died on the family homestead in Ennismore Township, Upper Canada, either in December 1826 or not long thereafter. Her death is known through oral family accounts passed along from one generation to the next and the early Peter Robinson reports on the settlers. Two deaths are noted for the Curtin family in the year 1826, thus it appears that either Timothy’s brother or sister also died that year.

Timothy Curtin, now a widower, continued to lived on his property, clearing the land and raising his sons. He died on 21 November 1838. His remains were laid to rest in the Mud Lake Cemetery, which by another name is known as the Cemetery By the Lake, Ennismore Township.

Marriage and Family Life for William

William Curtin was the oldest of Timothy and Catherine’s three sons. As already noted, William was born in Ireland and baptized at St. Anne Shandon Church, County Cork.

On 30 April 1843, in the town of Peterborough, William married Emma Blanco. Their marriage was performed by the Reverend John M. Rogers. Emma was born about 1825, a daughter of John Blanco and his wife, Mary Lumbley. The Blanco family had come from England about 1831 or 1832. The Blanco family also settled in Ennismore Township where Emma’s younger brother, William, was born in September 1833.

Emma (Blanco) Curtin died at her home in Ennismore Township on 9 January 1875. Her remains were buried in the family plot in St. Martin’s By the Lake cemetery.

With the passing of time, this early pioneer cemetery fell into disrepair. In the 1980s the cemetery became the focus of a major effort to clean and repair both the grounds and the surviving headstones. A cairn was built to hold the reassembled broken headstones and any partial pieces of headstones that were found on the burial grounds. A plaque was erected to the memory of the sixty-seven Irish families who came as part of the Peter Robinson emigration of 1825. 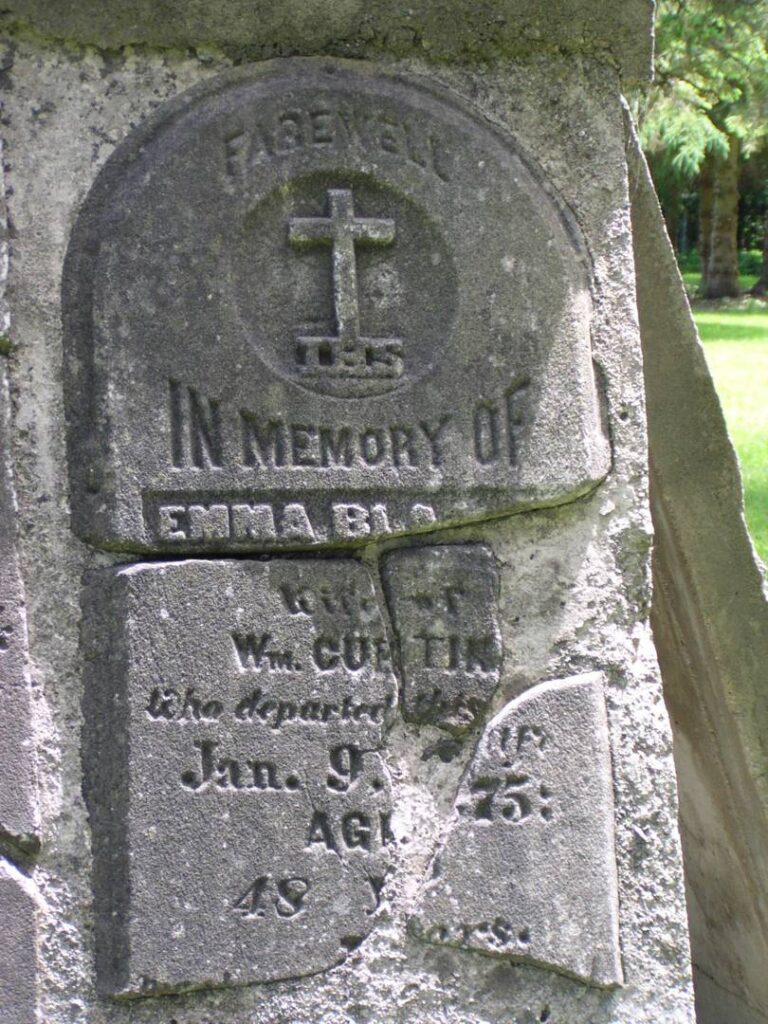 A year following the death of his wife William Curtin married again. His second wife was Mary Ann Fawcett, the daughter of Edward Fawcett and his wife, Bridget Mooney. Mary Ann was born in County Galway, Ireland on 15 May 1856. To William and Mary Ann (Fawcett) Curtin another six children were born. Their first was a son, Edward, born in 1876. Next came Catherine, born in September 1878. She was followed by Lucy Curtin born in 1881, then Cornelius in 1883 and Thomas Joseph born in 1887. The youngest child was Vincent Alphonse Curtin, born in February 1890 just three months following the demise of his father.

William Curtin, born in 1819 in County Cork, Ireland, died in Ennismore Township on 29 November 1889. While it is possible that William was buried next to his first wife in the cemetery By the Lake, it is also possible that his remains were interred in the Pioneer Cemetery that opened in 1854. A record of his burial is found in the parish register, but it does not indicate to which cemetery the interment took place.

Mary Ann (Fawcett) Curtin outlived her husband by forty years.  She continued to reside in Ennismore Township until the early years of the 1900s. By 1910, she was living in Westmoreland County, Pennsylvania with her sons Thomas Joseph and Vincent Alphonse. In 1921, Mary Ann resided in Hamilton city, Ontario with her son, Vincent. Within a few years, she had returned to Pennsylvania to live with her son, Thomas. There Mary Ann died on 21 September 1929. Her burial took place on 24 September 1929 to the Old Sacred Heart Catholic Cemetery in Jeannette, Westmoreland County, Pennsylvania.

The Family of Cornelius Curtin

Cornelius was the second son of Timothy Curtin and Catherine O’Grady. Cornelius was born in Ireland in 1821, making him just four years old when the family sailed for Upper Canada. About the year 1843, Cornelius married Jane Graham, daughter of Robert and Margaret Spowers (Redden) Graham. Jane Graham was born 28 February 1827 in Berwick, Scotland.

The family of Cornelius and Jane are quite interesting. In 1851, he is listed as a stone mason, living with his wife Jane in Harvey and Smith Township, Peterborough County. While William was raised in the Catholic Church, the family religion given at this date was Baptist. They appear to have stayed members of the Baptist Church throughout their married lifetime.

David was the youngest of the three children of Timothy Curtin and Catherine O’Grady who came with their parents to Upper Canada in 1825. David did not marry. He died in Ennismore Township on 21 November 1838.

Another Curtin Story is that of the 1825 Robinson Settler Family of John Curtin and his wife Margaret Devine.

Looking for more about this area?
CLICK THE LINK BELOW TO VISIT OUR
WEB STORE:
Cemeteries of Ennismore Township