The family of John and Peggy Stack came from Listowel, County Kerry Ireland in 1825. They travelled aboard the ship Amity, leaving the Port of Cobe, Cork in May 1825. Peggy Stack became ill on the voyage over. She died either at Quebec or Kingston, in the early summer months.

By August that year, John and his children had arrived to the future site of the town of Peterborough and by November that year, they had moved onto their homestead property, the south half of Lot 5, Concession 7 in Ennismore Township.

Although John received permission, through an Order in Council, to settle on the Ennismore property, he does not appear to have every completed the necessary requirements to acquire ownership of the land. Nor was an application located in the Heir and Devisee records. Such an application could have been made in the name of either of his sons or his daughters, for the patent on this property as a rightful heir of John Stack.

By 1851, the sons Robert and Thomas, are nowhere to be found as residents of Ennismore Township or the surrounding  area. Marriages were located for two of the daughters of John and Peggy Stack.

Margaret, daughter of John and Peggy Stack, married about 1831. Her husband was another early settler by the name of Daniel O’Donoghue. He too was born in Ireland, about the year 1802 and had come to Upper Canada in 1825 with his parents Arthur O’Donoghue and Abigail O’Mara. 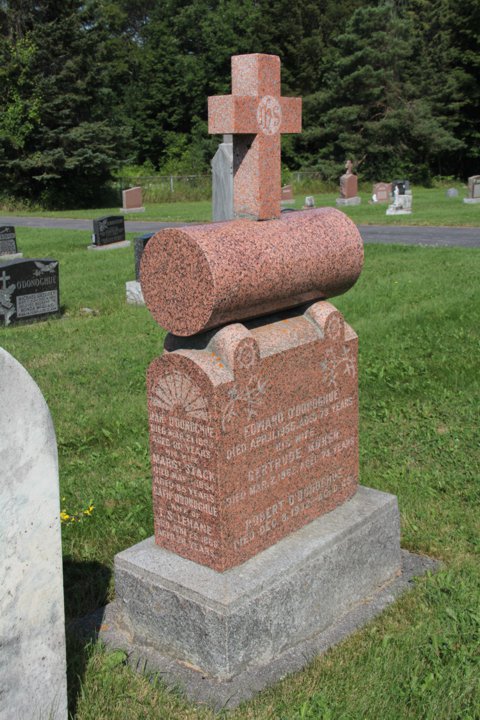 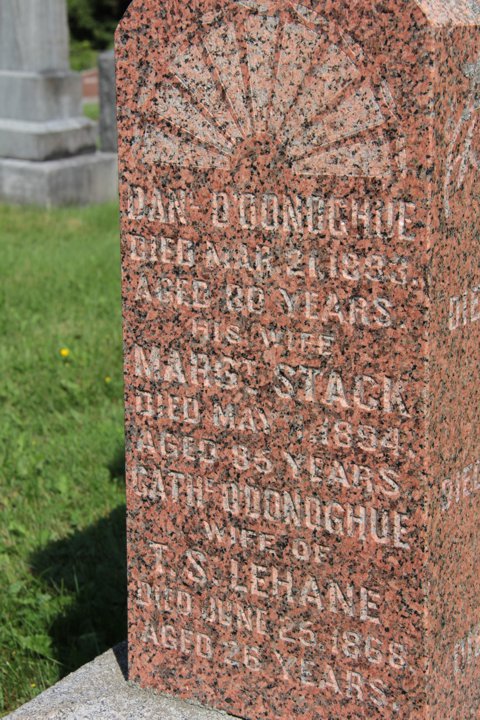 Daniel O’Donoghue died at their home in Ennismore Township on 21 March 1883.  His death notice appeared in the local Examiner newspaper of 22 March 1883:

At Ennismore, on Wednesday, the 21st of March, Daniel O’Donoghue Esq., in the 81st year of his age. Funeral will be on Friday, the 23rd from the residence of his son-in-law Mr. Jeremiah McCarthy.

On the Friday mentioned, his remains were laid to rest in St. Martin’s Cemetery in Ennismore Township.

His wife, Margaret (Stack) O’Donoghue, outlived him by another ten years. Her death occurred in Ennismore Township on 1 May 1894. A brief notice appeared in the local Examiner newspaper of 3 May 1894:

At Ennismore, on the 2nd of May 1894, Margaret Donoghue, relict of the late Daniel Donoghue, aged 84 years.

She was laid to rest beside her husband in St. Martin’s Cemetery, Ennismore on Thursday, 3 May 1894.

John, son of Daniel and Margaret (Stack) O’Donoghue, married Ellen Crough on 13 February 1865 at St. Martin’s Church in Ennismore Township. Born in Ontario in 1845, Ellen was a daughter of Michael Crough and Bridget Carew. They had five children. Mary Eleanor was born in 1866. She would marry James Killen. Daniel James was born on 1 December 1867. Michael Sarsfield was born 31 July 1869. He would marry Mary Louise Guiry. Catherine Ann was born 4 January 1871. She would marry Daniel Kennedy. Ellen was born 21 January 1873. As a young woman she joined a religious order and was known as Sr. Ellen.

Within a week of Ellen’s birth, her mother, Ellen (Crough) O’Donoghue died on 27 January 1873. She was buried in St. Martin’s Cemetery.

Three years later, John O’Donoghue married Margaret Gorman on 9 January 1876. Their wedding took place in Ennismore Township. Born 3 April 1853 in County Tipperary, Ireland, Margaret was the daughter of Maurice O’Gorman and Catherine Ryan. Her family surname is found variously as Gorman and O’Gorman, down the years. 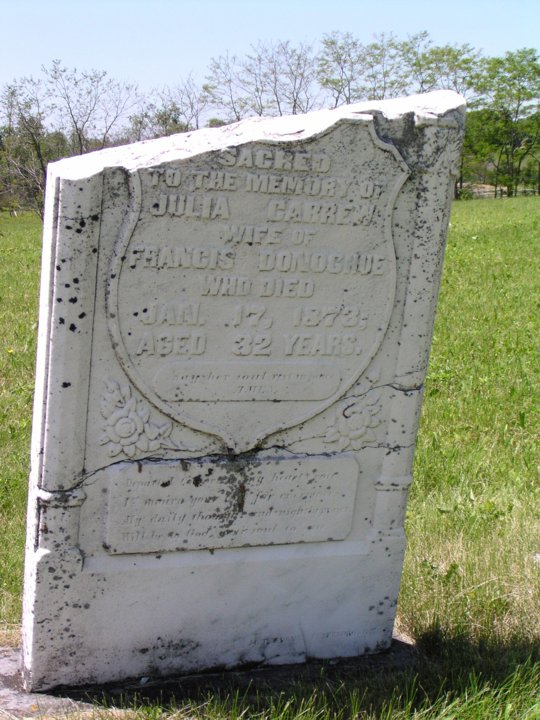 On 19 February 1878, at Downeyville, Ontario, Francis O’Donoghue married a second time. His wife on this occasion was Ellen O’Connell, born 29 September 1855 in Emily Township, Victoria County, Ontario. They had a family of four children. Francis Joseph was born in 1879. Margaret was born in 1882 and Catherine in 1884. Their youngest child, Dennis, was born in 1887.

Robert, son of Daniel and Margaret (Stack) O’Donoghue, was born in Ennismore Township in 1844. He married Anne Crough on 15 February 1870, at St. Martin’s Church. Born in January 1848, Anne was the daughter of Michael Crough and Bridget Carew. Over the twenty years following their marriage, Robert and Anne had a family of ten children. John Thomas was born in 1872; Margaret in 1875 and Ellen in 1877. The next three children were Timothy born about 1879, Michael born in 1881 and Mary Agnes born in 1883. The four youngest children were Catherine born 1885, Daniel born in 1888; a daughter who became a religious and lastly, a son Robert born in 1892.

Catherine and John had a family of ten children. Margaret was born in 1839. She would marry Martin Kearns. Alexander Pope was born in 1842. As a young man he married Ellen O’Gorman.

Elizabeth Pope, the second daughter of John and Catherine (Stack) Pope, was born in October 1848. She married Edward Crowe.

Catherine (Stack) Pope died 17 July 1885. Her death was recorded in the local paper, the Peterborough Examiner of 18 July 1885: 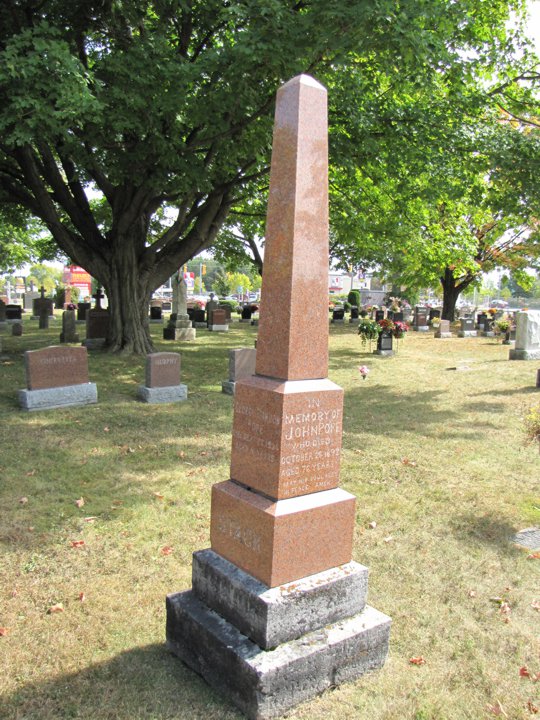