The Family of John Curtin and Margaret Devine

John Curtin, together with his wife, the former Margaret Devine, came from the parish of St. Anne Shandon, County Cork, Ireland in the year 1825. They were a part of the large immigration supported by the British government and led by Peter Robinson.

It is possible that John was a brother of Timothy Curtin who also came from the Parish of St. Anne Shandon. While the two families came on the same ship, Star, and both settled in Ennismore Township, no other data has been located that confirms a relationship between these two men, Timothy and John Curtin. 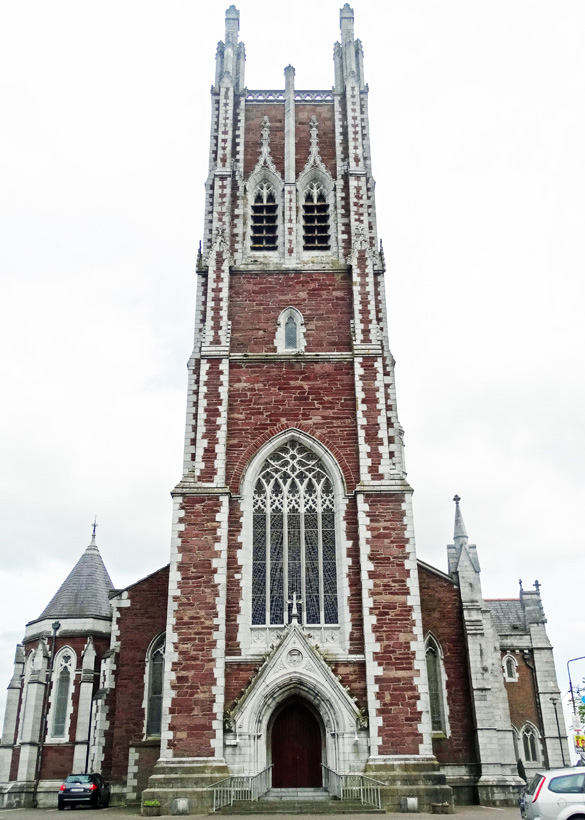 Arriving to the meadow in the south end of present day Peterborough, the family took up temporary residence in a tent village. It had been prepared for them by Peter Robinson. During the weeks that they resided here, John and Margaret had time to chose their land in one of the nearby townships. Arrangements were then made to construct a small shanty for the family to live in and food supplies were provided to them.

John and Margaret Curtin chose the one hundred acres on the south half of Lot 12 in Concession 7 of Ennismore Township.

From September 1825 through November 1826, the family lived on their new property. The report by Peter Robinson during this period of time, recorded John and Margaret on their homestead, with their three children and Margaret’s brother, William Devine in the household.

Between September and December 1825, Joseph reached his seventh birthday. In recording Joseph as a child over 7 years, in the quarterly reports, Peter Robinson mistakenly moved the two younger children into the older age bracket as well. All three children were recorded as over 7 years for the remaining quarterly reports up to the end of November 1826.

Between September and November 1826, one man died in the family. Since John was still recorded on his land in 1827 and 1828, this indicates that the man who died was William Devine, Margaret’s brother.

About 1829-1830, John Curtin died. It would appear that his wife, Margaret (Devine) Curtin also died during the years between 1830 and February 1852, for no evidence is found pertaining to her by the latter year. The deduction that John Curtin Sr., died about 1830 comes from the fact that he is not recorded on the surviving Census and Assessment records for 1830 or thereafter. Further, Joseph Curtin, John’s son, made a sworn statement in 1840, that Patrick Shannon had been residing on this property for the ten years prior, that period being 1830 – 1840. Were John Curtin yet living, he would be living on his own land, making improvements to ensure his right to obtain the Patent when the time was right to do so.

In 1840, Joseph Curtin, of the Township of Hamilton in the Newcastle District made a Petition to the government for his claim to the south half of Lot 12 Concession 7 in Ennismore Township. His own attempt to obtain the Patent to this property was turned down by the government. So Joseph hired a lawyer to  re-apply on his behalf to the Executive Council Office at Kingston. The barrister made the point that Joseph had been granted the Ennismore Lot through an application presented to the Heir and Devisee Commission in 1839. The Executive Council was now simply being asked to confirm the decision reached by the Heir and Devisee Commission.

In his 1843 correspondence about the land that had been given to his father, Joseph not only indicates that he had formerly lived in Ennismore Township, but also states that he is the eldest son and Heir at law of John Curtin, now deceased.

The petition of Joseph Curtin late of Ennismore in the Colborne District, Yeoman – Humbly Sheweth –

That your petitioner claimed the South Half of Lot number twleve in the Seventh Concession of Ennismore aforesaid at the last sittings of the Heir and Devisee Commission and that his claim was then allowed.

That your petitioner claimed as eldest son and Heir at Law of John Curtin deceased, the original nominee of the Crown for the said Lot and that he is informed that the location of the said John Curtin must be confirmed by your Excellency in Council before the patent thereof can issue to your petitioner. 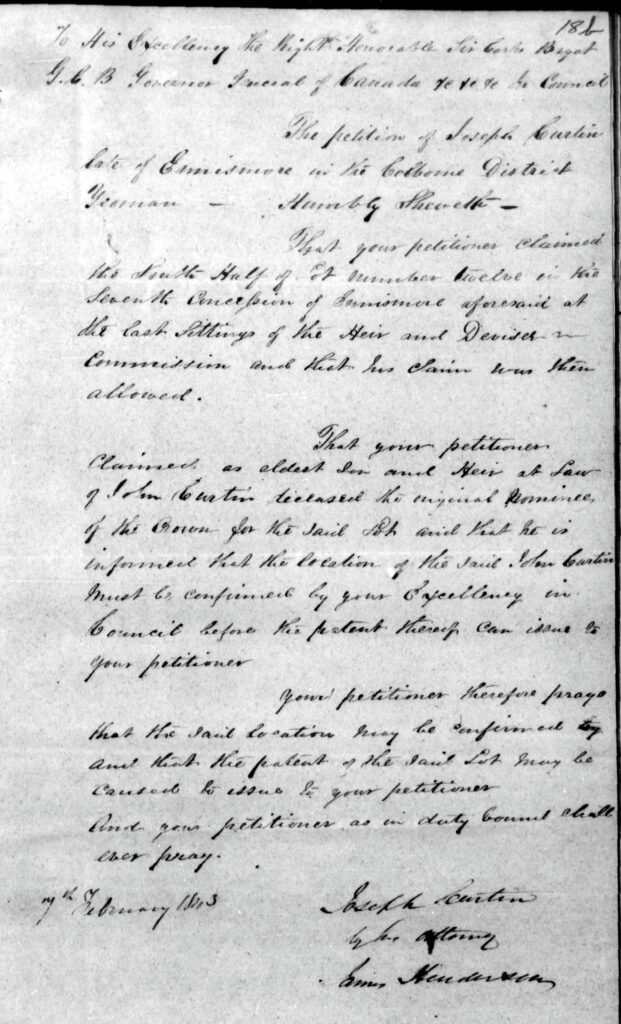 In 1843, Joseph was successful in obtaining the Patent to the land given to his father in 1825. The ownership of the property was granted to Joseph on 31 July 1843. A year or two earlier, Joseph had sold the land to John Burton who in turn sold the land again within a couple of years.

By the census of 1851, there is no sign of Joseph Curtin living in Hamilton Township or anywhere in Ontario or Canada.

John Curtin, born in Ireland in 1821, was the younger brother of Joseph. He was just four years old when the family arrived in Upper Canada. About 1851, John Curtin married Harriet Blanco. She was born in England about the 1830 and had come to Upper Canada with her parents, John Blanco and Mary Lumley. In 1851, John Curtain and “Mrs. Curtain” resided in Otonabee Township, Peterborough County.

In early April 1853, at the age of 23 years, Harriet was baptized into the Catholic Church at Downeyville. On the baptism record, her parents are listed as John Blanco and Mary Lumney (Lumley) of England.

A few months prior to Harriet being baptized, there is an entry in the parish register for John Curtin, son of John and Harriet. John was born on 2 April 1852 in Ennismore Township.

John Curtin Sr., died on 27 February 1874 at the family home in Smith Township. He was interred in Ray’s Cemetery, Lakefield. By 1891, Harriet and her three sons, George, David and Charles were living in the village of Lakefield. They continued to be members of the Baptist Church. Harriet died 11 January 1894. Her remains were laid to rest next to those of her husband John, at Ray’s Cemetery.

The Children of John and Harriet

John, the eldest child of John Sr., and Harriet (Blanco) Curtin, was born in April 1852 in Ennismore Township. He was baptized at St. Luke’s Church in Downeyville in December of that year. In October 1874, John Curtin married Eliza Chambo. She was born in Canada about 1853. Within a few years, they had three daughters, Bertie, Eliza and Harriet. By 1880, the family resided in the village of Pinconning, Michigan, United States. John Curtin died in Bay City, Michigan on 11 November 1905. Eliza (Chambo) Curtin died in Bay City on 17 April 1902. 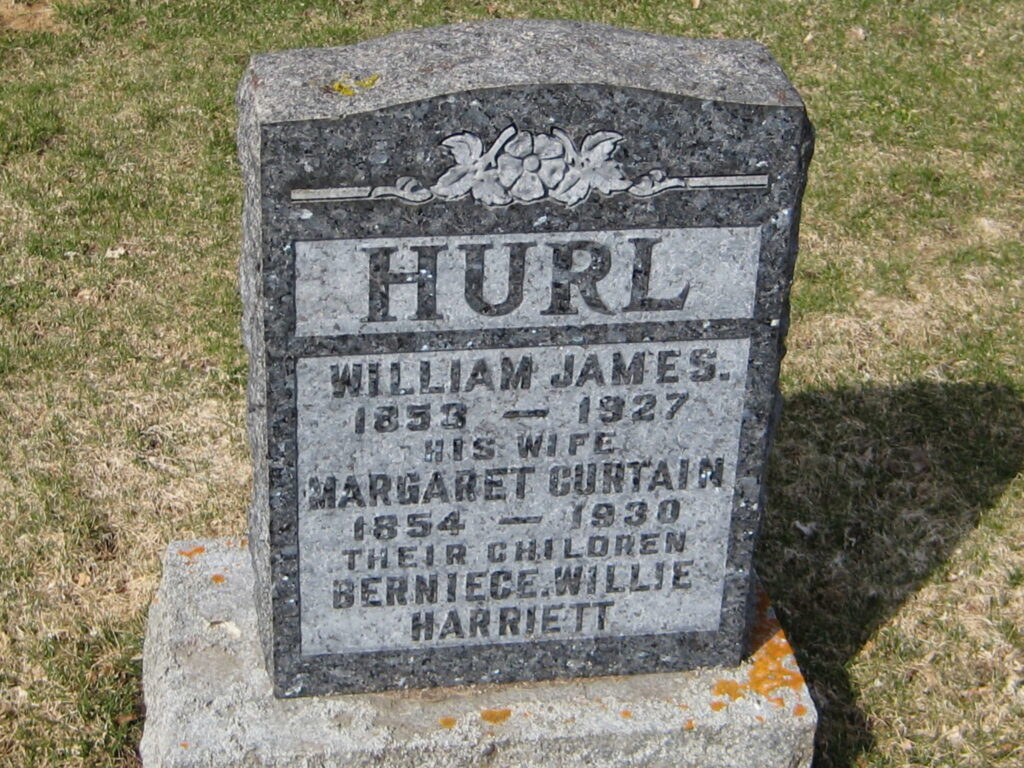 Margaret Lavina, daughter of John and Harriet (Blanco) Curtin, was born in February 1854 in Ennismore Township. At the age of 21 years she married William James Hurl, son of Joseph and Ann Jane (Hatton) Hurl. William and Margaret lived in Smith Township, Peterborough County where they raised a family of nine daughters and five sons.

William, son of John and Harriet (Blanco) Curtin, was born on 26 February 1856 in Ennismore Township. He was baptized at St. Luke’s Catholic Church in Downeyville on 23 March 1856. It is probable that William died young as he is not found with the family in the 1861 Census when he would have been five years old.

Mary Jane, daughter of John and Harriet (Blanco) Curtin, was born 25 June 1857 in Smith Township. On 29 December 1875, in Bobcaygeon, Ontario, Mary Jane married David Richard Montgomery. Mary Jane (Curtin) Montgomery died at their home on Concession 7 Lot 21 of Verulam Township, on 2 April 1898. She was laid to rest in Verulam Cemetery at Bobcaygeon. 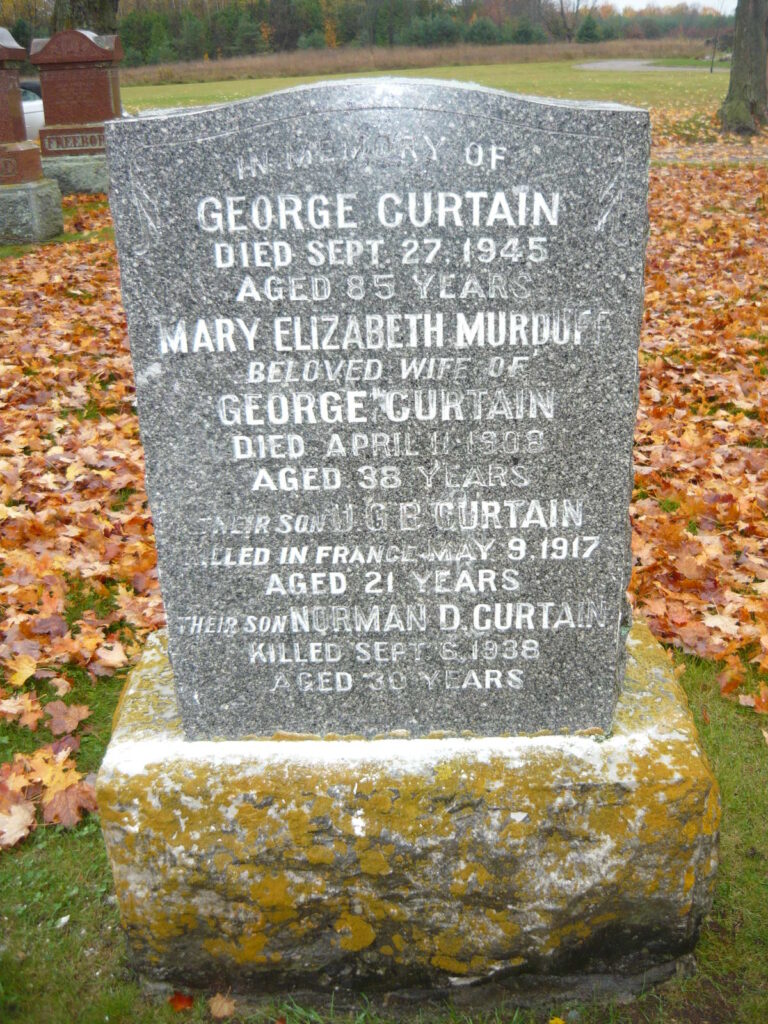 George, son of  John and Harriet (Blanco) Curtin, was born in Canada West, 29 May 1859. At the age of 35 years, George was married to Mary Elizabeth Murduff. She was born in November 1873, a daughter of Sylvester Murduff and his wife Minvera Norton. They resided in Peterborough County and raised a family of five sons and one daughter. Mary Elizabeth (Murduff) Curtin died in April 1908. George Curtin died in September 1945. On their headstone, their surname is spelled “Curtain” a variation that members of the family sometimes used.

Joseph, son of John and Harriet (Blanco) Curtin, was born 27 July 1861. He spent his adult life farming in Smith Township. Joseph died at the age of 46 years on 19 March 1908. He was laid to rest in Ray’s Cemetery, Lakefield. Joseph never married.

David, son of John and Harriet (Blanco) Curtin, was born 26 June 1863. At the age of 31 years, he married Eliza Godfrey, daughter of Samuel Godfrey and Alma Ann Morey.  Eliza was the widow of Thomas Stinson when she married David Curtin. They had a daughter Olive born in 1898. Eliza (Godfrey) Curtin died on 26 May 1929 in Lakefield, Ontario. She was buried at Ray’s Cemetery in Lakefield. David Curtin died in Lakefield on 26 June 1944. He was laid to rest beside his wife, Eliza.

Charles, son of John and Harriet (Blanco) Curtin, was born in 1871 in Smith Township, Peterborough County. On 3 October 1911, at Haileybury in the Nipissing District of Ontario, Charles married Velma Murney. Velma, a daughter of George Murney and Mary Moffatt, was born in 1881. They had a family of three sons and two daughters. Charles Curtin died on 1 November 1956. He was laid to rest in Ray’s Cemetery at Lakefield. Velma (Murney) Curtin died in Peterborough on 30 March 1964. She rests beside her husband in Lakefield Cemetery.

There was one more child in the family of John and Margaret (Devine) Curtin. This was Mary Curtin, born in 1824 and just one year old when the family came to Canada. Very little has been discovered about Mary, other than she was alive and living with her parents throughout 1826, when Peter Robinson completed his quarterly reports on the progress of the settler families.