The William Cottinghams of Emily Township

Maurice and Mary Cottingham, both born in County Cavan, Ireland, decided to leave their Irish home to immigrate to Upper Canada. When in the early months of 1820, ocean travel was possible, they departed Ireland, bringing their two young sons, Samuel aged 16 years and William, aged 12 years. The two boys were born in County Fermanagh, Ireland, Samuel in 1804 and William in the year 1808.

Arriving in Upper Canada in 1820, the family made their way to Cobourg and from there travelled northward into Cavan Township, in the Newcastle District.

In the fall of 1820, William, along with his brother Samuel and their cousin, Henry English, made a trip from their home in Cavan up into Emily Township. Working their way through primal woodland growth, for there was no trail to follow, the small group eventually reached the Pidgeon River. Family lore tells how a tree was felled across a narrow spot of the river and this was used as a bridge to get them over the water to the far riverbank. It is told that this spot where they crossed, is near where the present-day dam in Omemee, is located. After crossing the river, they chose a location for their future home and commenced clearing the land of its growth of small brush and trees. Only the largest trees were left standing. The trio then made their way back home to Cavan Township where the winter months were spent. 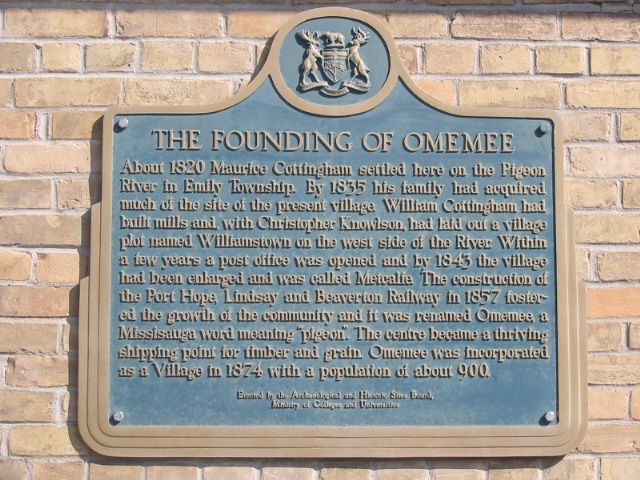 When the following spring arrived, the little party made its way once again to the clearing in Emily Township. Here Samuel Cottingham and Henry English built a little shanty that measured 12 feet by 14 feet. They built with logs and used cedar slabs for the roofing. Their first cabin effort was not without difficulties. Built originally on a deep bank of snow, as the spring melt got underway, the cabin tilted to one side. By the time the snow had melted enough for the little cabin to settle, they discovered it was not tall enough inside to allow them to stand upright. So, the roof was removed to allow for a couple more rounds of logs to be added. With this done, the family was fully able to live in their new cabin home.  In this manner, the Cottinghams, the Henry and James English families and possibly the James Laidley family all became the first families to settle on the future site of Omemee.

Samuel, born 1804 in County Fermanagh, Ireland, was the older son of Maurice and Mary Cottingham. On 17 November 1828, in Emily Township, the Reverend Joseph Thompson married Samuel Cottingham to Ann Laidly. Ann was born in Ireland in 1811. Two sons were born to their marriage. 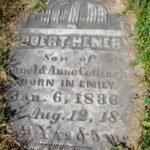 Robert Henry, the older son, was born to Samuel and Ann (Laidly) Cottingham on 6 January 1836 in Emily Township. He was baptized on
20 August 1838 and died on 12 August 1844 at the young age of nine years and 5 months. His remains were interred in the Emily Cemetery.

William S., second son of Samuel and Ann (Laidly) Cottingham was born 7 August 1843 in Omemee. He is found living at home with his parents up until 1871. On 12 May 1874, at Port Hope, Durham County, Ontario, William S. Cottingham married Mary Jane Wood. She was born in England in 1851, to Charles and Hester Wood. The young newly wed couple settled in Omemee after their marriage. In 1874, William was appointed as the Omemee Treasurer at a salary of $10.00 per annum.

The first child born to William and Mary Jane was Emily Blanche, born 15 September 1877. She was known in the family as Blanche. Two years later, on 13 July 1879, another daughter was born to the family. This was Annie Elizabeth. Another daughter, Mary, was born on 23 August 1881. Sometime after the birth of Mary, William and Mary Jane moved their family to the city of Brandon, Manitoba. Here a son, Walsh, was born to them in the year 1884.

By 1901, William and Mary Jane were living in the city of Winnipeg. Their three daughters, Blanche, Annie and Mary, were all living together as lodgers in a hotel owned by William L. Capell. Blanche worked as a stenographer, Annie was a re-toucher, perhaps of photographs, and Mary was a teacher.

Nothing further was discovered about this family group of William and Mary Jane (Wood) Cottingham.

Samuel and Ann (Laidly) Cottingham lived out their lives in the village of Omemee. Samuel died at their home on 5 August 1884. His death was recorded in the local Peterborough Examiner of Aug. 14, 1884:

Omemee – One of our oldest citizens has passed away in the person of Mr. S. Cottingham, who died on Tuesday morning, at the advanced age of eighty years. For years Mr. Cottingham has been failing in health and strength and unable to leave his home or take active exercise. On Wednesday he was buried in the cemetery, a large funeral following the remains. Great sympathy is felt for Mrs. Cottingham in her bereavement, especially as her son, Mr. W. S. Cottingham, living in the North-West, was unable to attend the funeral.

The date of death of Ann (Laidly) Cottingham was not located. 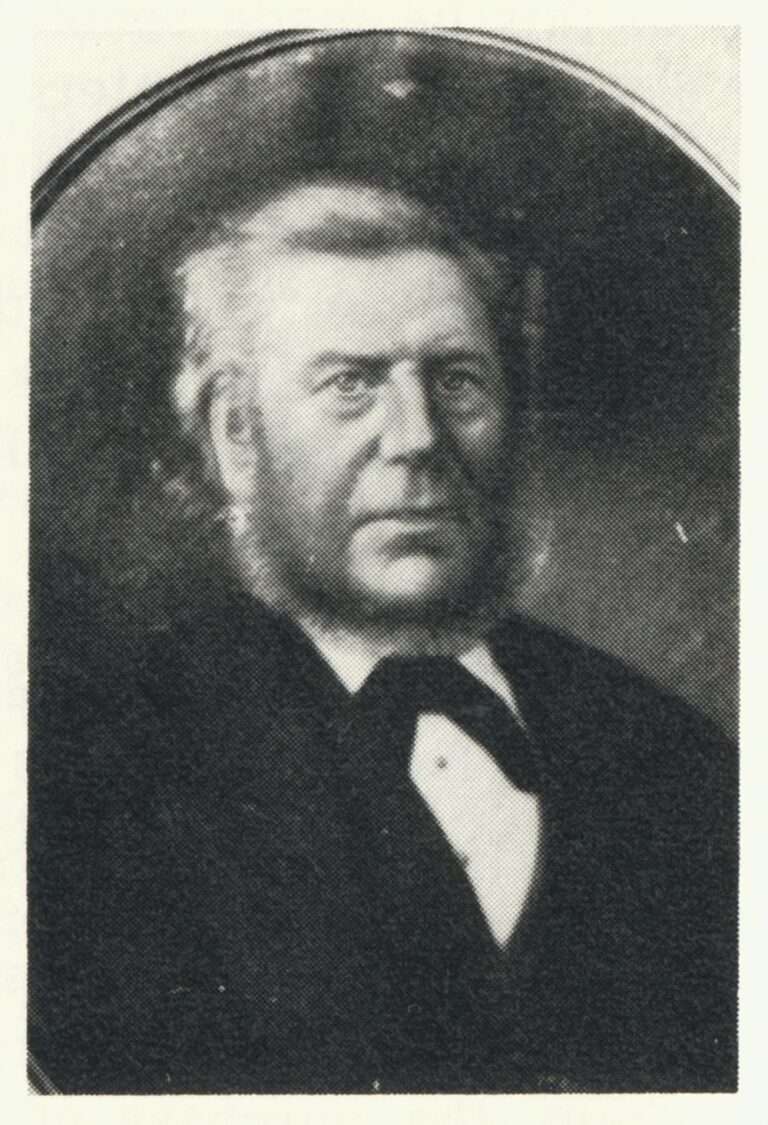 Lieutenant-Colonel William Ward Cottingham was a brother of Samuel and thus, also a son of Maurice and Mary Cottingham. William was born in County Fermanagh, Ireland in 1808 and was a young teen-aged boy when the family immigrated to Upper Canada in 1820.

On 7 March 1831, William married 15-year old, Jane Huston, the service performed by the Reverend Joseph Thompson. Jane was born in August 1814, in Cavan Township, in the Newcastle District. She died the following year. She was buried in the Emily Cemetery.

Within a few years of Jane’s death, William married a second time. His wife’s name was Mary Eleanor, but her maiden surname has not been confirmed. To William and Mary Eleanor were born seven children.

A great tragedy befell William and Mary Eleanor when their home caught fire and burned on the night of 6 February 1843. The fire took the lives of their four children: Letitia Jane, Henry William, George Hughes and Charles Wellington. The children’s bodies were buried in Emily Cemetery. Death struck again when Mary Eleanor Cottingham died on 15 March 1852 and then again two years later when Richard George Cottingham died at the age of six years. William once more found himself a widower, now with a surviving young daughter and son.

William and Lucy continued to reside in Emily Township, where he took an active role in support of the local community. William died on 19 May 1875. His death was recorded in the Peterborough Review of 28 May 1875:

Omemee – Death of Lieut.-Col. Cottingham – We very much regret to have to chronicle the death of Lieut.-Col. Cottingham, somewhat suddenly on Wednesday morning, at the residence of Mr. Thomas Matchett, Omemee. About ten days ago Mr. Cottingham went to Omemee on business and was taken ill. He rallied in a few days, but a turn for the worse took place Wednesday morning, and about 9 o’clock he expired. Mr. Cottingham was one of the oldest and one of the wealthiest residents of the county; and was identified with almost every important movement. For many years he was Reeve of Emily township and Warden of Peterborough and Victoria when united counties. He was also elected Reeve of Omemee when that village was incorporated last year. He removed from Omemee to Lindsay last year, and was, we believe, preparing to build a fine residence here in which to spend the remainder of his days. In politics he was a Liberal Conservative; but was of an independent turn of mind. He was, we believe, over sixty years of age – but was hale and hearty; was thrice married; and leaves a wife and large family. 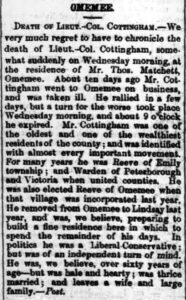 At Moira Hall, Peterborough, on the morning of the 3rd instant, Lucy Alicia Jellett, relict of the late William Cottingham, Omemee, aged 47 years. Funeral will take place at 2 o’clock on Sunday, 5th instant. Friends and acquaintances will please accept this intimation without further notice.

A number of the children of Lucy and William were married. Mary Elizabeth Cottingham, born 13 July 1854, became the wife of George C. Cluxton on 8 February 1872 at Omemee. She died 18 May 1939. George pre-deceased his wife, his death occurring on 17 April 1885 at Peterborough. They rest in Little Lake Cemetery in that city.

Sophia Alma, daughter of William and Lucy (Jellett) Cottingham became the wife of Archibald William Stevenson on
25 September 1878 at Peterborough. Sophie died 16 November 1943. Archibald died in 1925. They had four children.

Lucy, daughter of William and Lucy (Jellett) Cottingham became the wife of Donald C. Edwards on 6 September 1881 at Peterborough.

Letitia Kate, daughter of William and Lucy (Jellett) Cottingham became the wife of James Morris. Their wedding took place at Peterborough on 20 August 1890.

Marriages were not located for the remaining children of Lucy and William. 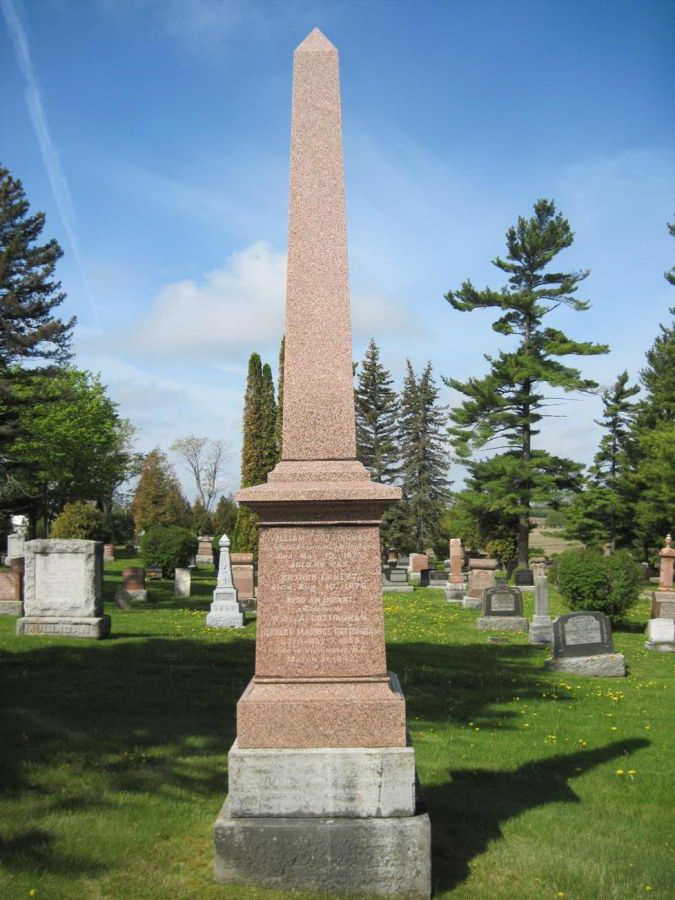 Of the children of William and Mary Eleanor, Olivea married Richard Homan Harris on 18 June 1875 at Omemee. They had a family of five children.

Captain William Henry, son of William and Mary Eleanor Cottingham led an active life, as had his father before him. He was educated at Upper Canada College in Toronto, graduating in 1861. Until the mid 1870s, he continued to reside in his parents’ home.

On 16 May 1874, in Emily Township, William wed Laura Rosa Jones, daughter of Reverend William Henry Jones, M.A., rector of Grace Church in Toronto. Laura was born 6 May 1853 in England.

In August 1875, at Omemee, a daughter was born to them. She was named Maud Isabelle. On 9 November 1876, another daughter was born. She was named Florence Mary Beatrice. Not long after the birth of Florence, the family moved to Chicago where he was engaged in railway business. Moving again, the family found itself in Winnipeg, Manitoba and from there on to Minnedosa where he was appointed Dominion Lands Agent. William continued in this position at Minnedosa then at Lethbridge, Alberta and lastly at Red Deer, Alberta where his death occurred on 21 December 1913. His wife, Laura Rosa (Jones) Cottingham died in 1929. They rest in the Red Deer Cemetery, at Red Deer, Alberta.

Three children were born to their marriage. Maud Isabelle was born in 1875. She married Horace F. Forrest and they lived at Winnipeg. Florence Mary Beatrice was the second child born to William and Laura. Florence did not marry. She died in May 1969 and was buried in the Red Deer Cemetery. Their only son was William Henry Percy, born in 1886 who died in 1911.

William and Eliza lived in Emily Township through the 1860s and 1870s. William died in the township on 16 February 1876. Eliza (Blackwell) Cottingham died on 4 October 1903. They rest in the Emily Cemetery.

William, son of William and Eliza (Blackwell) Cottingham, married Emma English on 13 March 1888 at Omemee. Emma was born in 1865, a daughter of John and Isabella English. William died 16 May 1916 in Emily Township. Emma died 19 August 1922 at Oshawa. They rest in Emily Cemetery.

This William Cottingham family is not of any known connection to the family of Lieutenant-Colonel William Ward Cottingham. However, the similar names and ages of members in these two family groups makes it quite easy to confuse them with one another.

Looking for more about this area?
CLICK THE LINK BELOW TO VISIT OUR
WEB STORE:
Emily Cemetery Transcript, Omemee