Eurena Jackson in her latter years lived on George Street in Peterborough. She had never married. On September 20, 1961, Eurena died at Civic Hospital. Her remains were interred in Emily Cemetery on September 23, 1961. 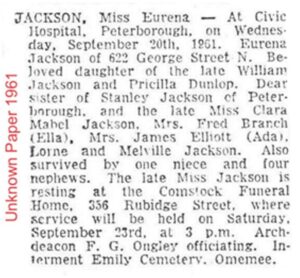