Once, in years gone by, Hunter House was a popular and busy hotel. Today, as a quiet apartment building at the corner of Main and Front Street in Bobcaygeon, its long ago history rests behind an unassuming presentation to the world. 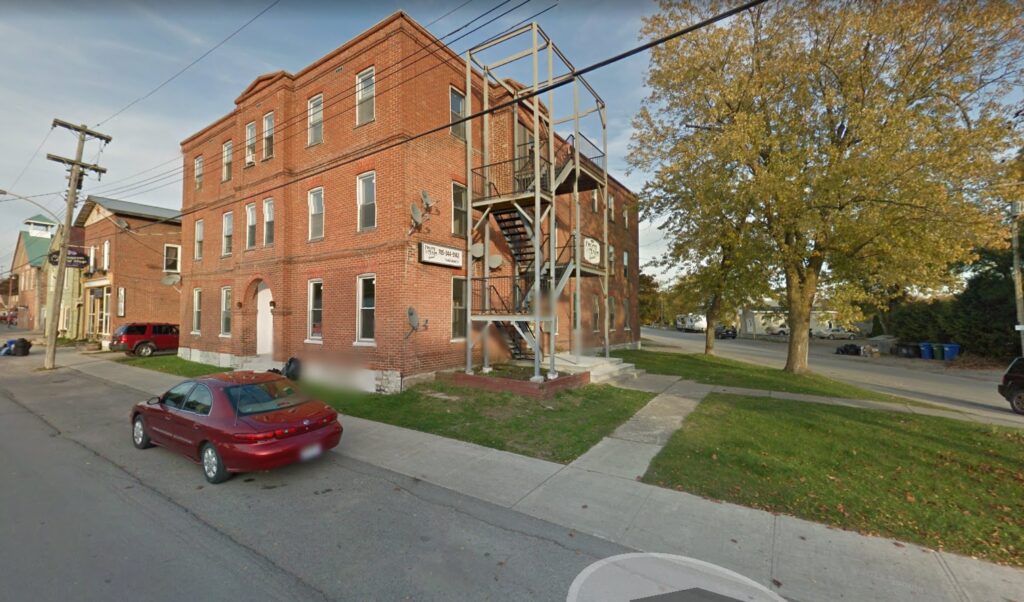 John and Ann Hunter came from Ireland about 1833. Their oldest boy, Henry had been born in Ireland in that year. David, their next child, was born in Upper Canada in 1834. Six more children would be born at their family home in Bobcaygeon. Nancy was born in 1837, followed by Joseph in 1840. James was born in 1841 and Garner in 1843. The two youngest in the family were girls, Ellen born in 1845 and Catherine in 1848.

In their turn, Garner and Catherine (O’Leary) Hunter had a family of six children. Their eldest was a daughter born in 1871, whom they named Catherine after her mother. Next was a son, Joseph James born in 1874. Effi, also known as Eva, was born in 1876. Another son, Garner John, born in 1879 followed. Mae Letitia was born in 1880 and finally, William’s birth took place in 1883.

Garner John Hunter grew up to marry Caddie Mary Herchimer, a young woman who had been born in Norham, Percy Township, Northumberland County. Her family surname is also often spelled as Hurchmer or Herkimer. Caddie’s parents moved to Bobcaygeon in the 1880s. There her father, Harvey Wing Hurchmer, ran a small watch and jewelry shop.

Caddie, a family nickname for Catherine, and Garner John were married at her parents’ home in Bobcaygeon on January 24, 1899. The young couple at first lived with her parents. They were found residing with Caddie’s parents at the time of the 1901 census, along with their first born child, Beatrice Bery Hunter, born in June 1899. 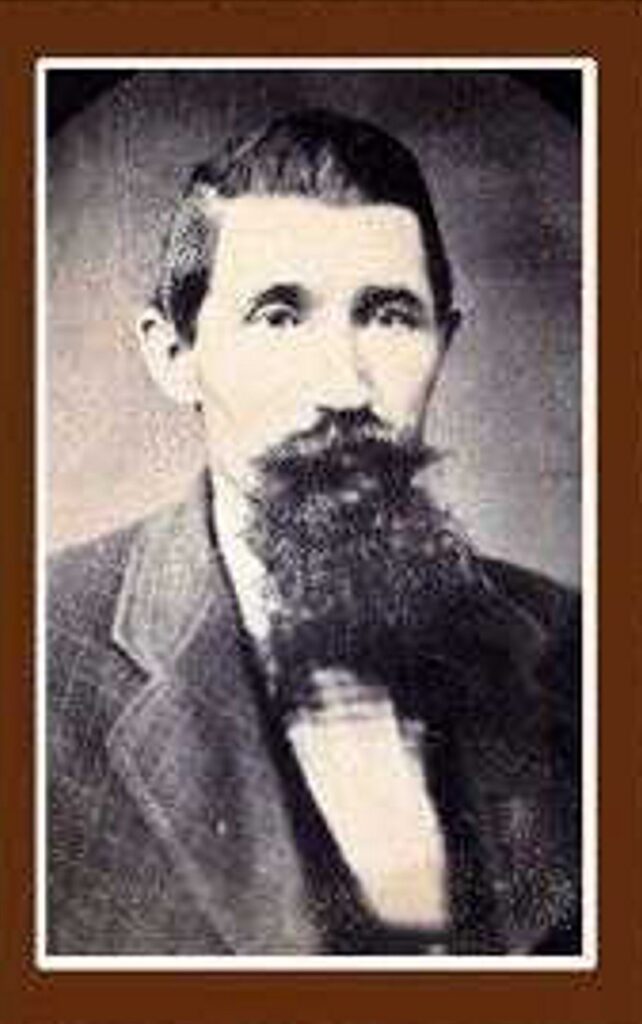 In 1900 Garner and Catherine (O’Leary) Hunter purchased the Rokeyby Hotel. Built in 1875 by Jackson Read, it was a successful business in the town of Bobcaygeon. They renamed it to the Hotel Royale. Then in 1902, Garner Hunter died of stomach cancer, in a Toronto hospital.

In the year 1905, the Royale Hotel, burned to the ground. The fine thirty year old structure was totally destroyed in the blaze. Family history relates that following the hotel fire of 1905, Garner John Hunter disappeared. However, he must have stayed around for a short period of time, for he was responsible for the rebuilding of Hunter House in the latter months of 1905 and early 1906. 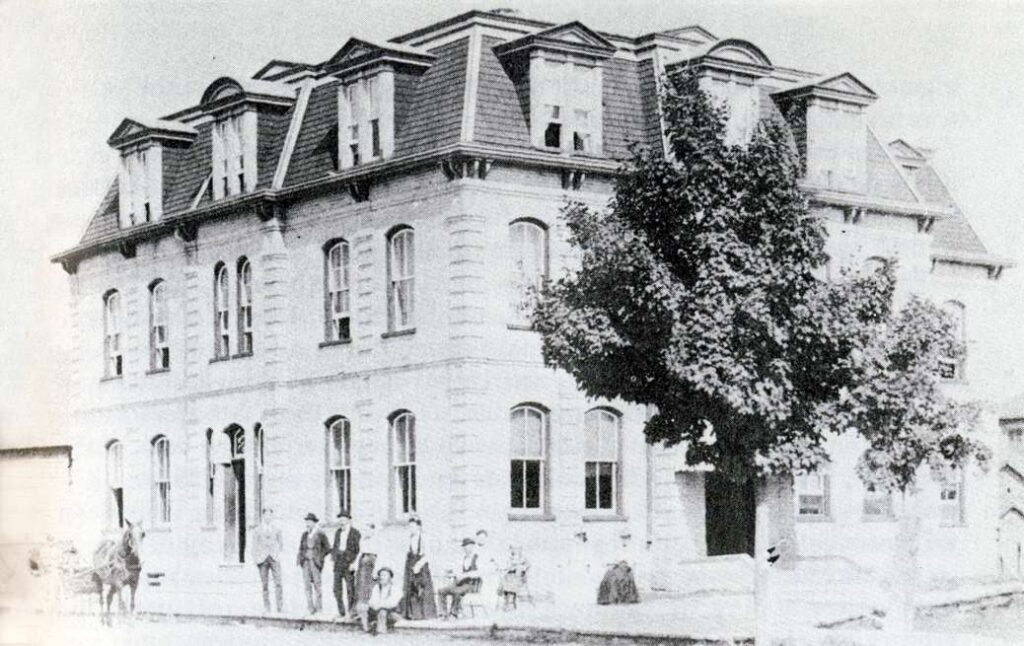 Hunter House Built Upon the Ashes

Garner managed the rebuilding of the hotel, together with a business partner by the name of Robert Kennedy. The new hotel was raised on the same property where its predecessor had stood. Shortly after it was completed, Robert Kennedy left the partnership to build a store next to the new hotel. The new facility still operated under the name of Hotel Royale but it was well known locally as Hunter House. Garner John and his wife ran the business for a couple of years before selling out to Garner’s older brother, Joseph James Hunter and his wife, Rose Coulter. 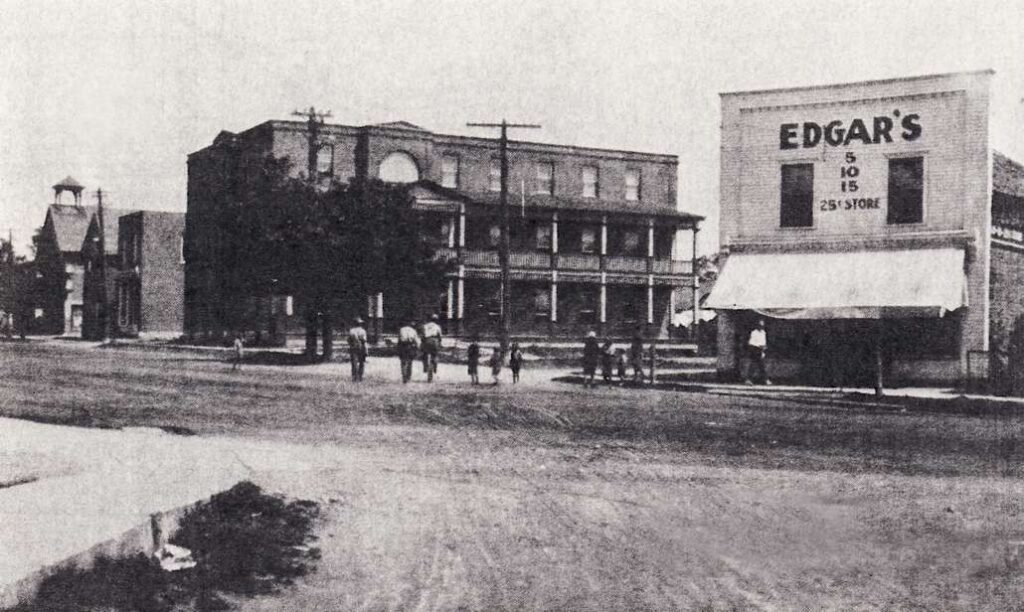 Hunter House rivaled its competitor, another local hotel called Rockland House. The two businesses were well supported by the local townsfolk. Both operations had leather-upholstered furniture in their hotel lobby. Each lobby featured a cozy fireplace. In the bar was a brass foot-rail and a heavy brass spittoon strategically placed for customer’s use. As well, each hotel featured a large dining hall and a busy poolroom. An advantage to Hunter House was that it also housed the Bank of British North America until the bank relocated to its own premises in 1912.

Joseph James Hunter was prone to heavy drinking. It is told he was often drunk and neglected his responsibilities to run the hotel. Joseph and his wife, Rose, it was later reported, fought bitterly on many a day. In 1909, with two young children, Carman aged 13 and Grace aged 12 years, Rose had reached a difficult decision. During the first week of August 1909, Rose asked her mother to come to the hotel and help her move back to her mother’s home. She was leaving her husband.

Joseph asked his mother-in-law and wife to stay one day more at the hotel. This they agreed to do. Rose spent the entire night caring for her husband as he progressed through the difficult stages of withdrawal from over indulgence in alcohol. At the break of dawn, she finally lay down to give herself a little much needed rest. While she slept, Joseph came in with his rifle and shot her in the head. Rose died shortly thereafter.

Hearing the gunfire, Rosanna Coulter, Rose’s mother, came rushing into the room, only to discover her dying daughter, with Joseph standing by watching. He seemed not to realize what he had done. 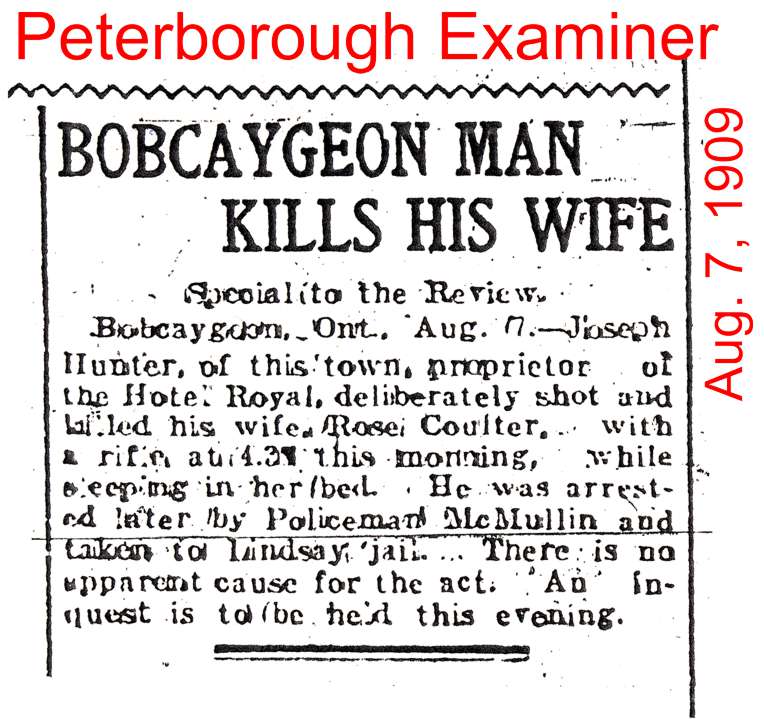 Joseph Arrested for Death of Wife

An inquest took place on the Tuesday morning, four days later. Being arrested, Joseph was taken to the Lindsay Gaol. Within another three months, he too was dead by his own hand. Joseph hung himself in his jail cell on October 24, 1909. The whole situation from Rose’s death in August to Joseph’s death in October, was a truly sad and tragic affair. Their two young children were taken into the care of Rose’s sister, Eluria and her husband James Bick.

In the aftermath of all the trouble, Hunter House became the Iroquois Hotel, but it never did prosper again. Within a few years it closed, later being sold to become the Front & Main Apartments that it remains to the present day. 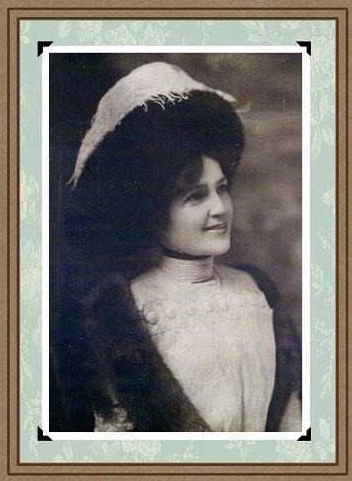 A Better Life for Caddie Herchimer

Within months of the death of her brother-in-law and his wife, Rose Coulter, more family decisions were made. Caddie Mary (Herchimer) Hunter, estranged wife of Garner Hunter, chose to leave Bobcaygeon. One day Caddie went to the train station with her six year old daughter, Doris Ann. Tickets were purchased for a trip to Toronto. By prearrangement, Caddie met John “Jack” Ingram at the Toronto Union Station and together they left by train heading west to Alberta.

There they lived in a common law marriage. Caddie and Jack lived in the west for many years. They had six children, Grace, Bertram, John Jr., Max, Ross and Bill. The family moved around quite often, as Jack sought employment sufficient to provide for his growing family. 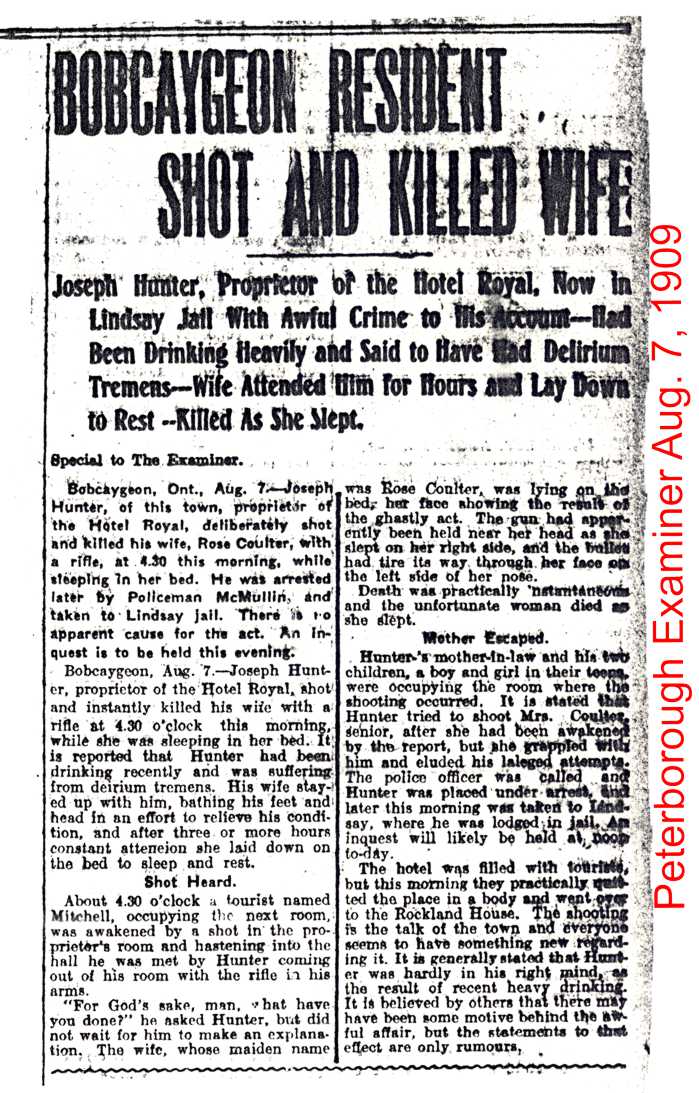 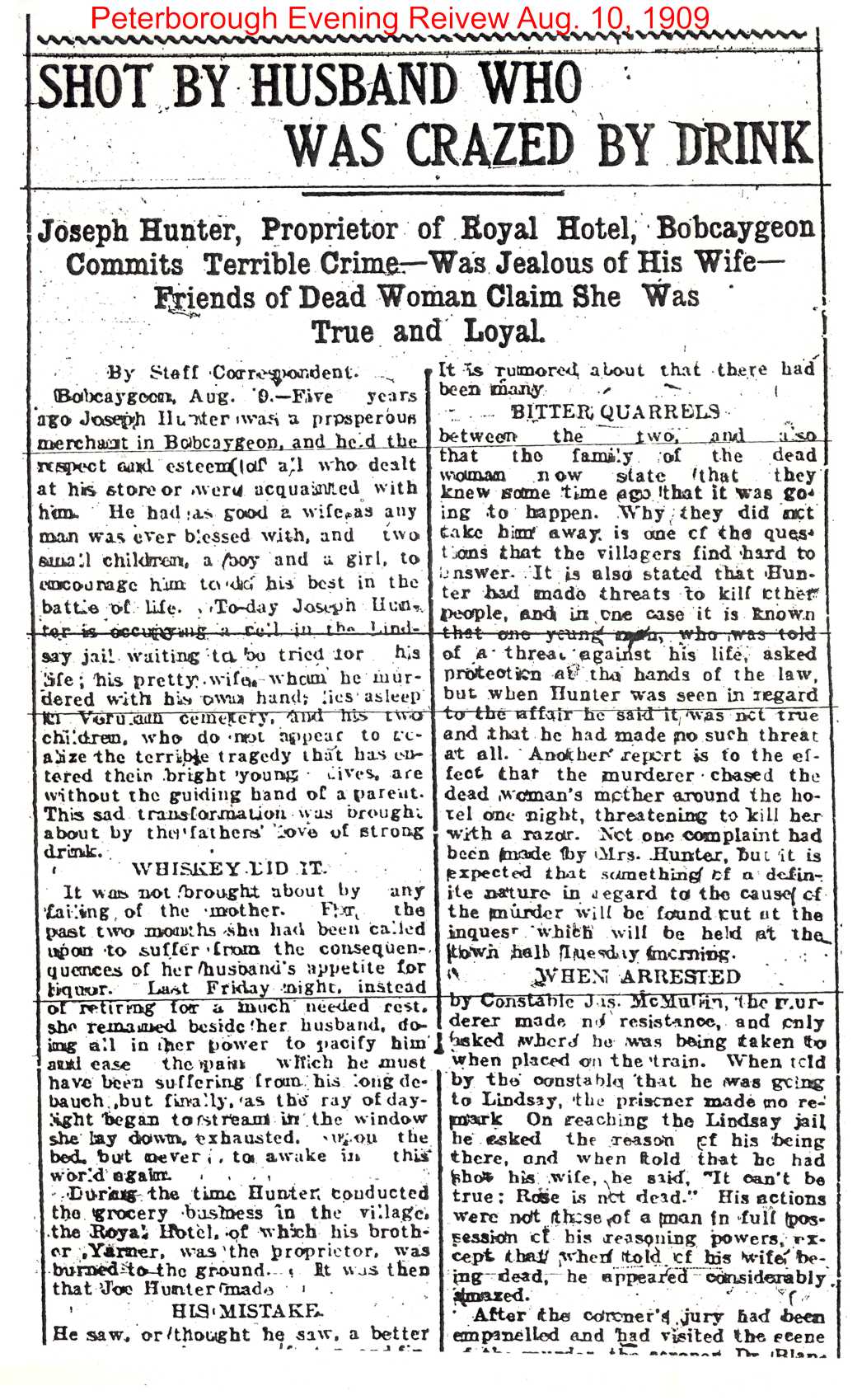 A Verdict of Murder

Looking for more about this area?
CLICK THE LINK BELOW TO VISIT OUR
WEB STORE:
Bobcaygeon – The Hub Of The Kawarthas