At Newmarket in the Home District of Upper Canada on 23 August 1834, Robert and Jane had a daughter. She was named Ann.

The next year, a daughter, Jane, was born in the month of July. She died at the age of 27 years on 31 July 1862 and was buried in Little Lake Cemetery in Peterborough.

In 1837, a third daughter was born to Robert and Jane. This little girl was named Mary. 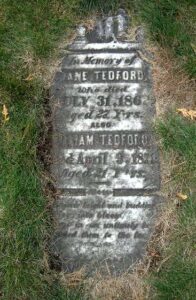 Robert Tedford Sr., husband of Jane Woodhouse, died in Otonabee Township on 8 December 1848. Thus, his youngest child, William, was born after the demise of his father. Jane continued to live in Dummer Township where she raised the children. In 1871, another of the children died. This was William who passed away in April 1871, at the young age of 21 years. He rests beside his sister, Jane, in Little Lake Cemetery.

In this line of the Tedford family, most of the children lived to adulthood and married. Ann became the wife of James Fawcett. They lived in Otonabee Township and had a family of fourteen or fifteen children of which at least two died young. James Fawcett died in February 1899 in Otonabee. His wife, Ann (Tedford) Fawcett, died on 4 October 1920. They rest in Little Lake Cemetery. 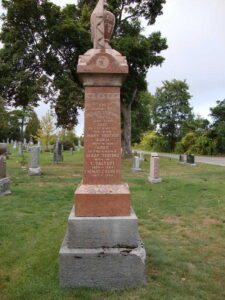 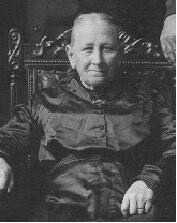 Richard, son of Robert and Jane (Woodhouse) Tedford, married Mary Trotter on 24 February 1869 in Peterborough. Eleven children were born to them, of which one was born and died in 1870. Seven of their other ten children married and continued to live in Otonabee Township.

Robert, son of Robert and Jane (Woodhouse) Tedford, married Susannah Nesbitt. She was born in May 1847 in Otonabee Township, a daughter of Alexander and Susannah (Trout) Nesbitt. Robert and Susannah were married 26 January 1869. Their family included four daughters and five sons. Robert died in December 1905. Susannah (Nesbitt) Tedford died on 21 August 1910.

John, son of Robert and Jane (Woodhouse) Tedford, married Catherine Lydia Nelson. She was born in Otonabee on 4 April 1847, a daughter of Archibald Nelson and Ann Richardson. Catherine and John had a family of thirteen children, being eight daughters and five sons. Catherine (Nelson) Tedford died on 30 August 1917. Her husband, John, died 23 August 1925. They rest in the Lakefield Cemetery. 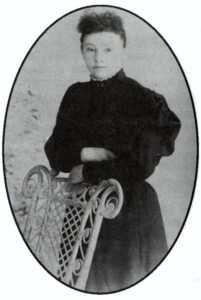 Betsy was the fourth daughter and sixth child, of John and Catherine (Nelson) Tedford.