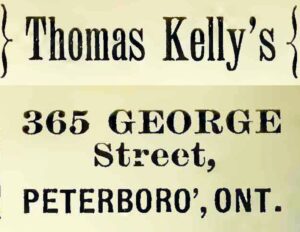 Reading through an early newspaper, The Irish Canadian, the item below caught my attention:

Peterborough is to have another class retail dry goods store. Mr. Thomas Kelly has opened out in Burnham’s block on the corner of George and Simcoe streets, and will enter into a lively race with the older established dry goods merchants of this town, for a share of the business continuing in this fast growing town. Mr. Kelly is one of the oldest dry goods clerks in Peterborough, having had an experience of over twenty-three years in the retail and wholesale dry goods business. He was in the employ of the Messrs. Harty, of Kingston and this town, for over seven years, the Messrs. O’Neill, of Port Hope…[text faded out] with Mr. Fairweather & Co., of this town, over nine years.

Mr. Kelly’s experience and thorough knowledge of the wants of the trade ought to draw to him a large share of the public patronage. He has had the store thoroughly overhauled, repainted and new counters placed in position, which is a decided improvement. A Review reporter called at the store yesterday and found Mr. Kelly hard at work marking new goods. He said that he intended keeping only the best quality of dress goods, staples, and fancy goods, always as represented, and at as low rates as is possible consistent with a fair living profit. Mr. Kelly commences business with the best prospects of success, having sufficient capital and a thorough knowledge of the wants of the people. 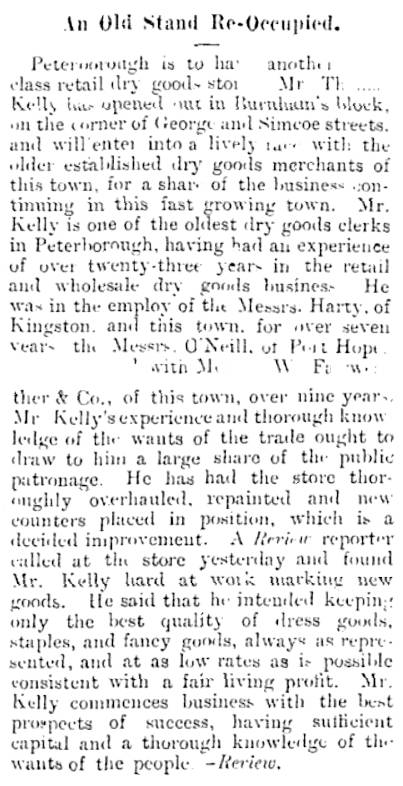 It naturally follows that the next question is wonder who was Thomas Kelly? And from that, it follows that a search into the life of Thomas Kelly is the next step. Thomas was born 13 May 1843 on Thorn Hill Farm, in Smith Township, Ontario. The farm was located on Lot 12 in Concession 1 of the township. He was a son of Patrick Kelly and Margaret McDermott.

A native of County Cavan, Ireland, Patrick Kelly was born about 1804. He came to Canada in 1831, with Captain Higginbottom. In 1837, Patrick purchased land in Douro Township, but later lived in Smith Township for a number of years. In 1858, Patrick moved into Peterborough.

Patrick’s wife, Margaret, was the daughter of Owen McDermott of Monaghan, Ireland. She came to Upper Canada in 1833. Her death occurred in December 1882.

By 1851, Patrick and Margaret lived in Monaghan Township, Peterborough County with their four children. Thomas was 9 years old, Mary was 7, Margaret 3 and Patrick was 1 year old.

The year 1875 proved to be an eventful one in the Kelly family. On 15 April 1875, Thomas Kelly married Mary Farrell Simons at St. Peter’s Church in Peterborough. Mary, born 11 January 1853 in Peterborough, was a daughter of Peter Simons and Mary O’Farrell. Barely a month later, Thomas’ father, Patrick Kelly died. His remains were interred in St. Peter’s Cemetery in town on 14 May 1875.

Thomas, in his early thirties when he married, was soon to become the proud father of his own children. Margaret Mary Kelly was born 13 February 1876.  She was followed by two sisters, Susan Agnes born in 1877 and Estelle Ann born in 1879.  During these years, Thomas worked as a clerk for other local businessmen.

In the early 1880s, Thomas went into business for himself. As shown in the newspaper article of 23 March 1882, his store was just newly opened at 359 George Street, Peterborough. Located in a section of the downtown that came to be known for its’ “department like” stores, Thomas Kelly was on one side of the Turnbull store while the store on the other side was that of J.W. T. Fairweather. During the years 1888-1889, Thomas Kelly employed two clerks in addition to his own hours of work at the store. The two clerks were John Doherty Jr. and John Fanning.

Early in January 1893, disaster struck the dry goods stores of Turnbull, Fairweather and Kelly. While the fire did not reach the main floor, it did produce a great deal of smoke damage to goods stored in the basement areas of the three businesses. There was considerable damage and loss of stock and all three stores held fire sales.

After the fire, Thomas Kelly moved his business to 365 George Street. The Kelly Dry Goods Store was located at this address in the City Directory for that year, 1893. Working for Thomas that year were several staff. Included among them were Charles Butler, John Fanning and P. H. Pearce. The men were employed as clerks. Salesladies that year were Miss Aggie Cahill and Miss Katie Simons.

1894 appears to be the closing year for the Thomas Kelly Dry Goods Store. That year his staff were down to only John Fanning and Moses Geroux, clerks. Despite extensive advertising in the City Directory for that year, Thomas closed the doors of his shop by the end of December. In 1895, he worked as an Insurance Agent. From 1897 until 1903, Thomas had a job as time keeper for the Trent Valley Canal. The family continued to reside at 352 Simcoe Street, their home since about 1893.

By the early 1900s, Thomas’ daughter Mary Margaret was working as a book keeper for the Canada General Electric Company. Susan Agnes, also now grown up, was working as a book keeper for W. H. Meldrum. Thomas Kelly died in Peterborough on 17 May 1906. His remains were interred in St. Peter’s Cemetery, Peterborough. Nine years later, his wife, Mary Farrell (Simons) Kelly joined her husband. She died on 8 June 1915. Her remains were laid to rest alongside those of her husband, in St. Peter’s Cemetery. 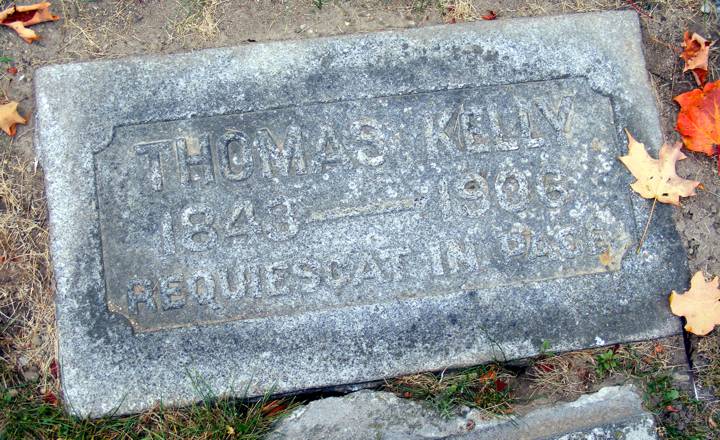 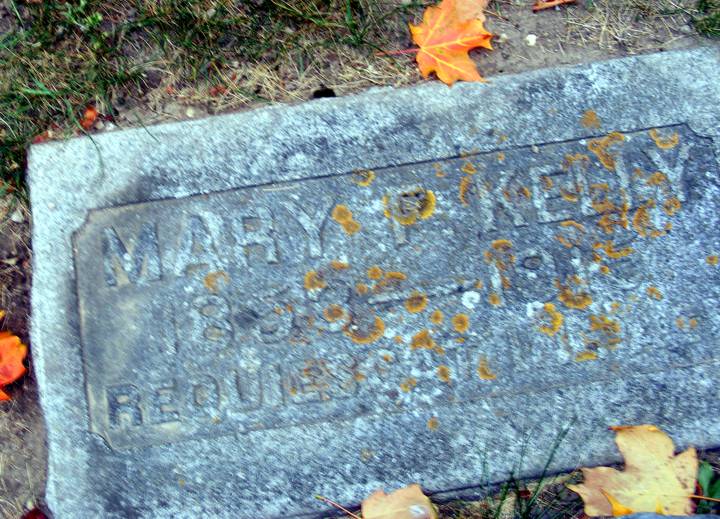