In October 1809, John Dunford was born in Longbridge-Deverill, Wiltshire, England. He was the youngest of seven children born to Joseph Dunford and Annie Grist. In January 1834, John married Mary Ann Payne. Shortly thereafter, John and Mary Ann sailed for Upper Canada. After arriving, the young couple made their way to Cobourg in the Newcastle District. There on 28 November 1834, a son, Richard Green Dunford, was born to them.

Joseph was just nine years old when his father, John Dunford, died on 4 January 1864 in Dummer Township. The following year, his mother, Mary Ann (Payne) Dunford died on 27 March 1865. An orphan at barely ten years of age, John would finish his growing up years in the care of older siblings and other family relations.

At the age of 23 years, Joseph Dunford wed Rachel Tighe. Rachel was born in August 1858, a daughter of Edward and Mary Ann (Bell) Tighe. Joseph and Rachel lived their lifetime in Peterborough County where a family of eleven children were raised. Joseph died in 1913. Rachel died in 1944. They rest in the Lakefield Cemetery, Peterborough County. 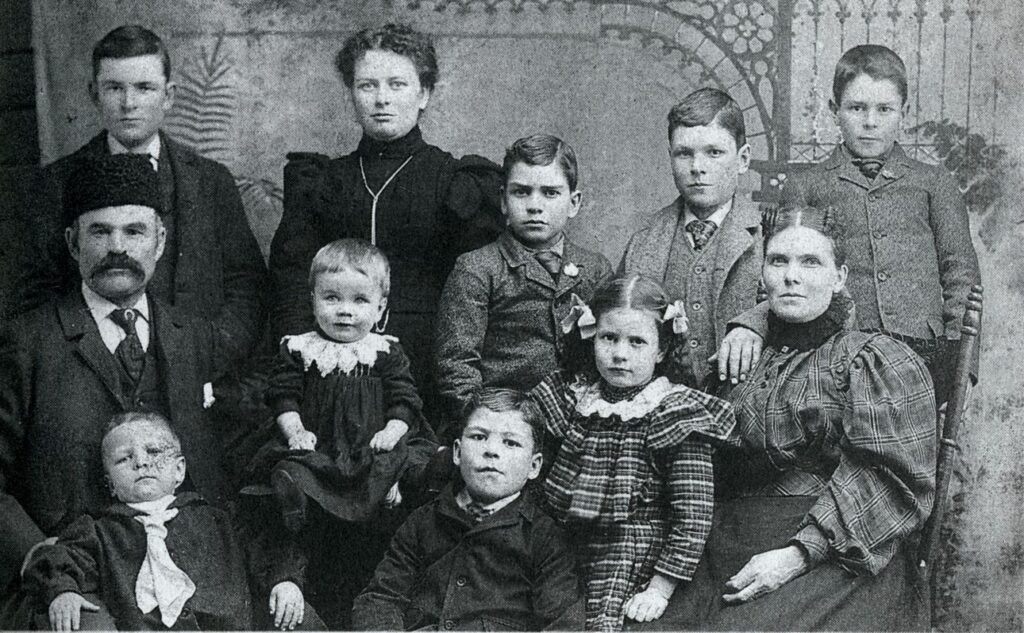 The Family of Joseph and Rachel (Tighe) Dunford 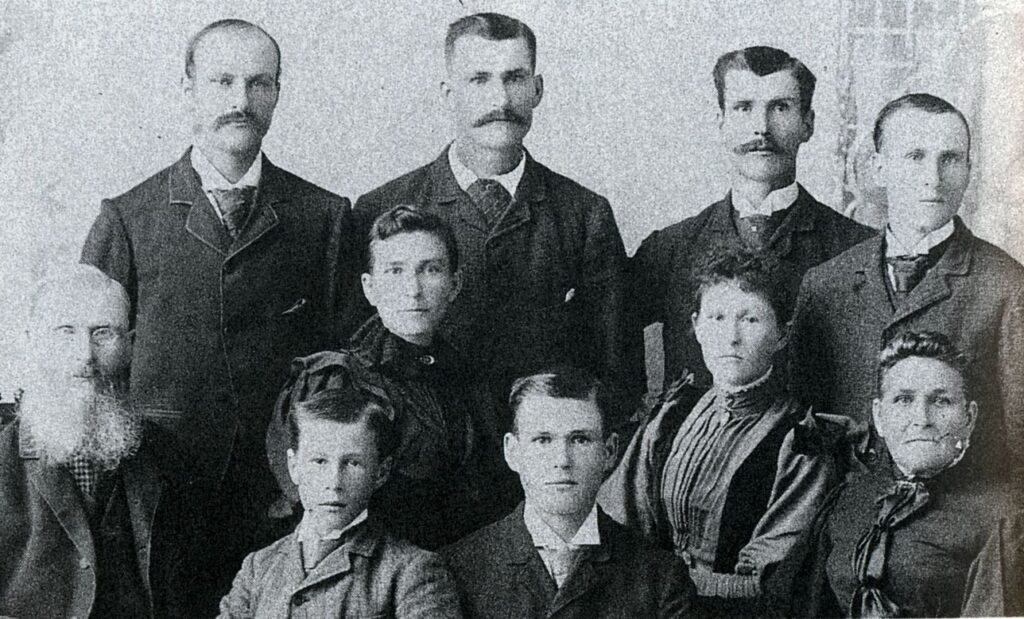 Lazarus and Susan Dunford
with their children

Lazarus, born in 1837, son of John and Mary Ann (Payne) Dunford, married Susan Margaret Bolton. Susan was born in Upper Canada in November 1838. She was a daughter of George Boulton and Elizabeth Hiscox. Lazarus and Susan had eleven children. Susan died in September 1905 and Lazarus followed her in January 1907. They rest in St. Mark’s Cemetery at Warsaw.

When he was just one year old in 1835, Richard came to Dummer Township with his parents. He grew up in the township, attending school and working on the family farm along with younger brothers and sisters. In 1860, Richard went to Burleigh Township where he purchased 100 acres of land. On 27 August 1860 back in Dummer Township, Richard married Mary Ann Hamlin. Together they settled on their property in Burleigh. This remained their family home for the next ten years. 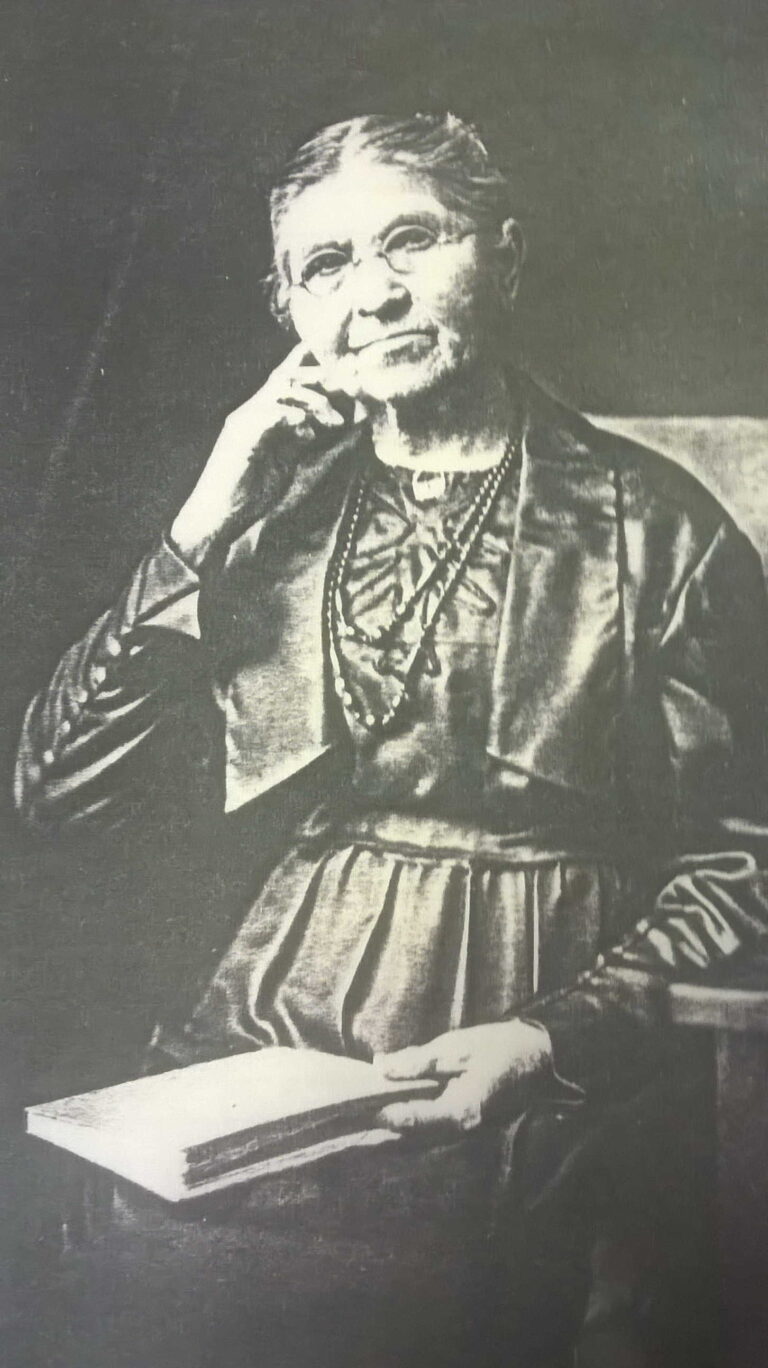 In 1870 Richard and Mary Ann purchased a farm in Douro Township. With their five children, they moved all the family possessions to a farm on Concession 3 Lot 23 in that township. They remained only a few months before moving once again. This relocation took the family to Monmouth Township in Haliburton County where they were living at the date of the 1871 census of Canada. 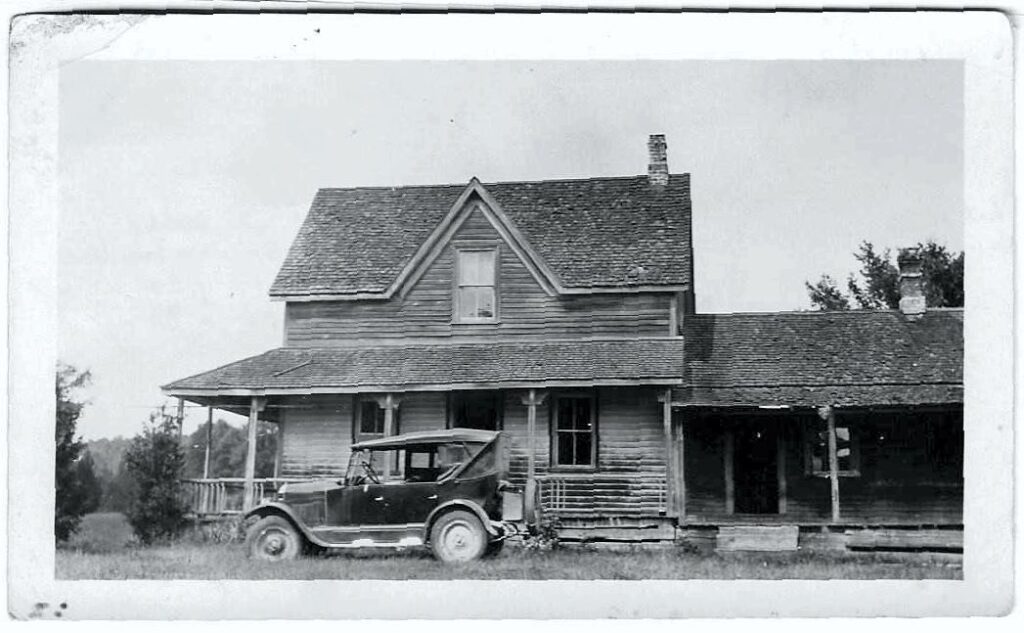 Township at this point in their lifetime. Shortly they returned again to Douro Township. In the early years of the decade of the 1870s, the family is found in Burleigh Township once more. Here their son, Frederick was born in 1873. By 1875, the family was living in Douro Township. Here the youngest four children in the family were born, Richard Cephas, in 1875; Margaret Melissa in 1877; Marcelina in 1877 and Elizabeth Louise in 1880.

After the birth of their youngest child, Elizabeth, the family moved once again. This time their destination was Monmouth Township. This would be the home of Richard and Mary Ann for the remainder of their lives. In mid January 1897, the family suffered the loss of their youngest son, Richard Cephas. His remains were laid to rest in the Wilberforce Cemetery.

Richard Green Dunford died at their Haliburton County home on 15 November 1908. His remains were buried in the Wilberforce Cemetery. 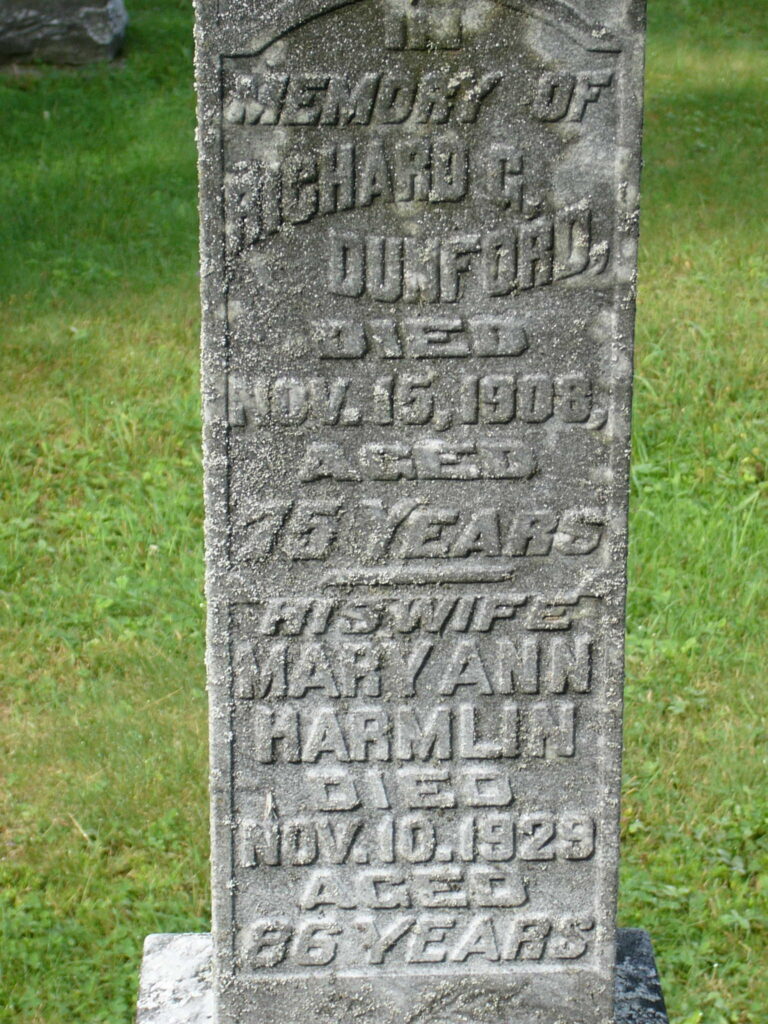 From the 1880s onward, a number of the children in this family married. 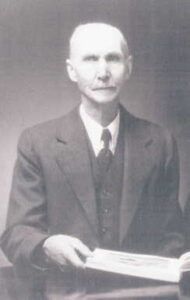 At Lakefield, Ontario on 11 March 1885, William John, son of Richard and Mary Ann (Hamlin) Dunford, married Susan Margaret Ingram. William was born 7 June 1861 in Douro Township while Susan was born 8 July 1863. Susan was the daughter of James Ingram and Celia Ellen Christie. They had eight children, six sons and two daughters over the sixteen years of their marriage. Oscar was born in 1887, Henry in 1889, William in 1890, Stanley in 1893, Stephen in 1894, Russell in 1896, Cecilia in 1898 and Susan was born in 1900. Susan Margaret (Ingram) Dunford, wife of William, died on 8 December 1901. Her remains were interred in the cemetery at Wilberforce.

William John Dunford married again a year later. His second wife was Margaret, daughter of Jeremiah and Mary (Balfour) Maguire. They married in Dysart Township, Haliburton County on 5 November 1902. They had almost fifty years together before Margaret died on 9 July 1951 at the age of 83 years. William John Dunford died in North Monaghan Township, Peterborough County on 9 May 1956. They rest in the Lakefield Cemetery. 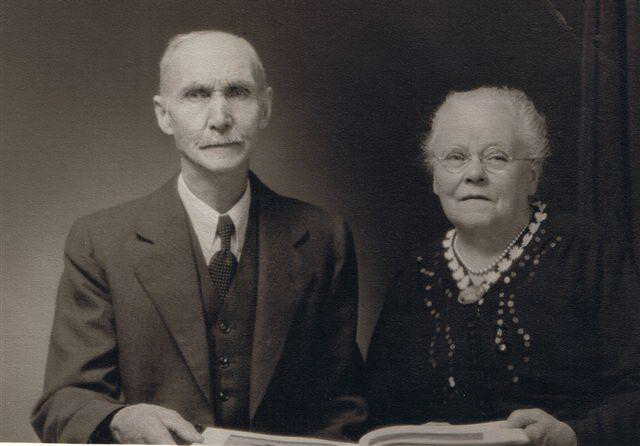 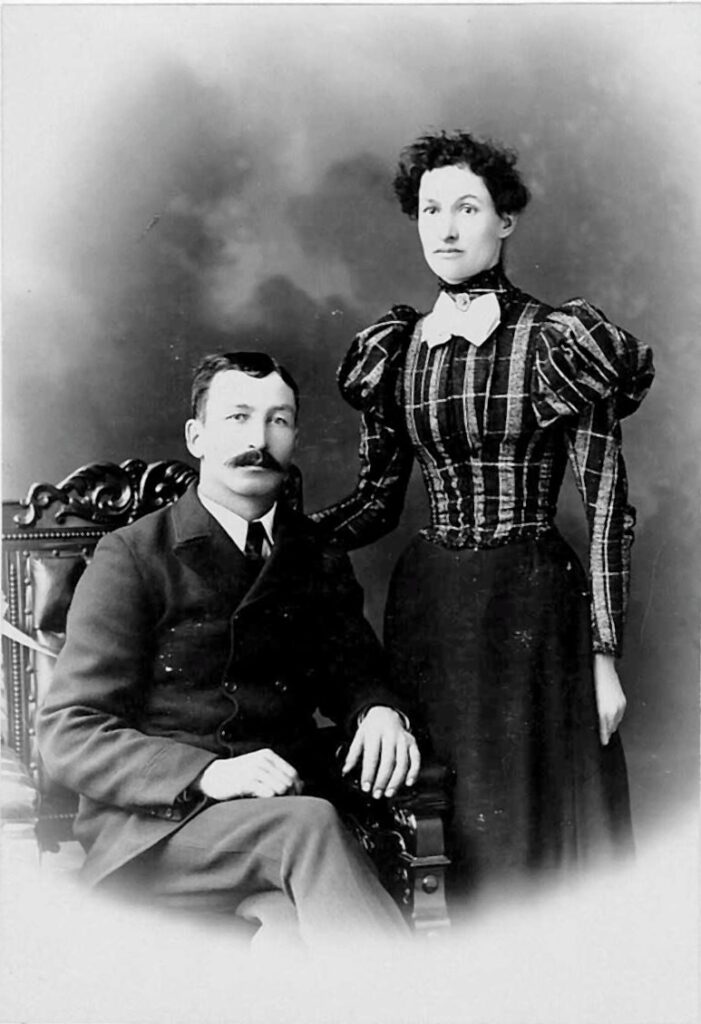 Albert, son of Richard Green and Mary Ann (Hamlin) Dunford, was born in Douro Township 11 February 1864. On 31 March 1886, in Dummer Township, he married Harriet, daughter of Francis and Elizabeth (Yates) Lemay. Harriet was born in Dummer Township 16 March 1863 but would spend much of her childhood years living with another family in nearby Douro Township. In 1871 she was living with her parents in Dummer Township, but also was listed as a servant in the household of James and Elizabeth Claque. It was with this family that Harriet lived, for much of her childhood. Her father, Francis Lemay, died in 1878. By 1881, Harriet was listed as a daughter of James and Elizabeth Claque. She had taken on their surname. When she married, Harriet listed the Claque’s as her parents. Many years later, her birth parents were listed on the registration of Harriet’s death on 24 March 1944. Albert Dunford died in Monmouth Township, Haliburton County on 24 February 1931. He and Harriet rest in the Lakefield Cemetery.

Thomas George, son of Richard Green and Mary Ann (Hamlin) Dunford, was born 3 February 1866, in Burleigh Township, Peterborough County. On 16 November 1892, Thomas married Nellie Ellen McPherson. She was born 8 December 1876, in Detroit, United States. In 1895, they had a daughter, Harriet Ann and in 1907 a son Leonard Harold was born.

Mary Jane, daughter of Richard Green and Mary Ann (Hamlin) Dunford, was born 15 September 1867 in Douro Township, Peterborough County. She was the eldest daughter in the family. On 20 November 1889, in Dummer Township, Mary Jane was married to Walter George Payne. He was born 1 March 1862 and was a son of John and Louisa Ann (Snelgrove) Payne. They lived for many years in the village of Wilberforce, in Haliburton County. Mary Jane and Walter had a family of eight children, seven of whom lived to adulthood. 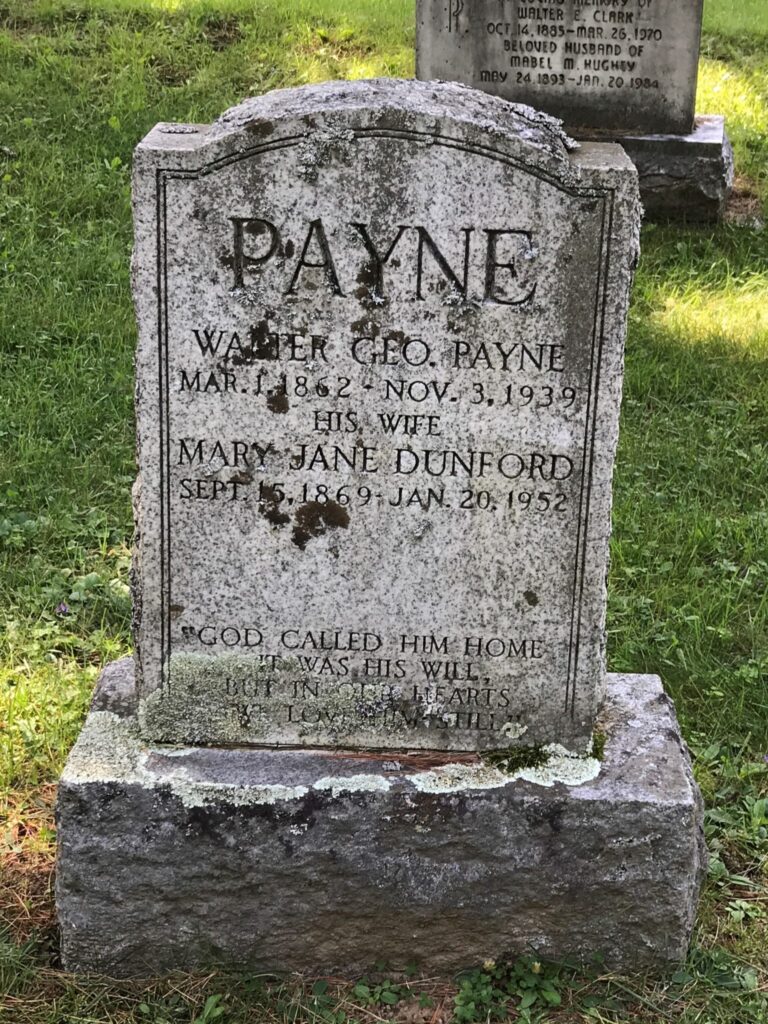 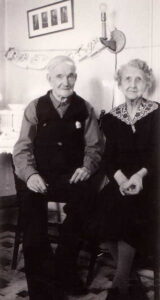 Not long thereafter, the family moved to the province of Saskatchewan. In 1911 they lived in the Assiniboia District. Here the youngest two children were born. Russell was born in 1907 and Florence in 1908.

By 1921, the family lived in the province of Manitoba in the Brandon District. They resided in the small village of Glenwood. William Coukell was now 56 years old. His wife, Ada, was 51 years. Still at home were Elba, age 19 years, Albert age 16, Russell age 14 years and Florence aged 12 years.

Joseph, son of Richard Green and Mary Ann (Hamlin) Dunford, was born 4 May 1871 in Douro Township, Peterborough County. As a young man in his late twenties, Joseph married at Essonville on 19 October 1898. His bride was Mary Elizabeth, daughter of James and Elizabeth (Golden) McCrea.

Joseph and Mary Elizabeth made their home in Monmouth Township, there raising a family of seven children. Richard was born in 1899 and Elizabeth in 1901. Mary Roxanne was born in 1903, Margarwet in 1904 and Bruce in 1906. The youngest two children were James, born in 1909 and Ada born in 1912. 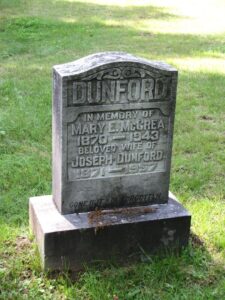 Mary Elizabeth (McCrea) Dunford died in 28 January 1943. Her husband, Joseph, died on 2 February 1957. They rest in the Wilberforce Cemetery. 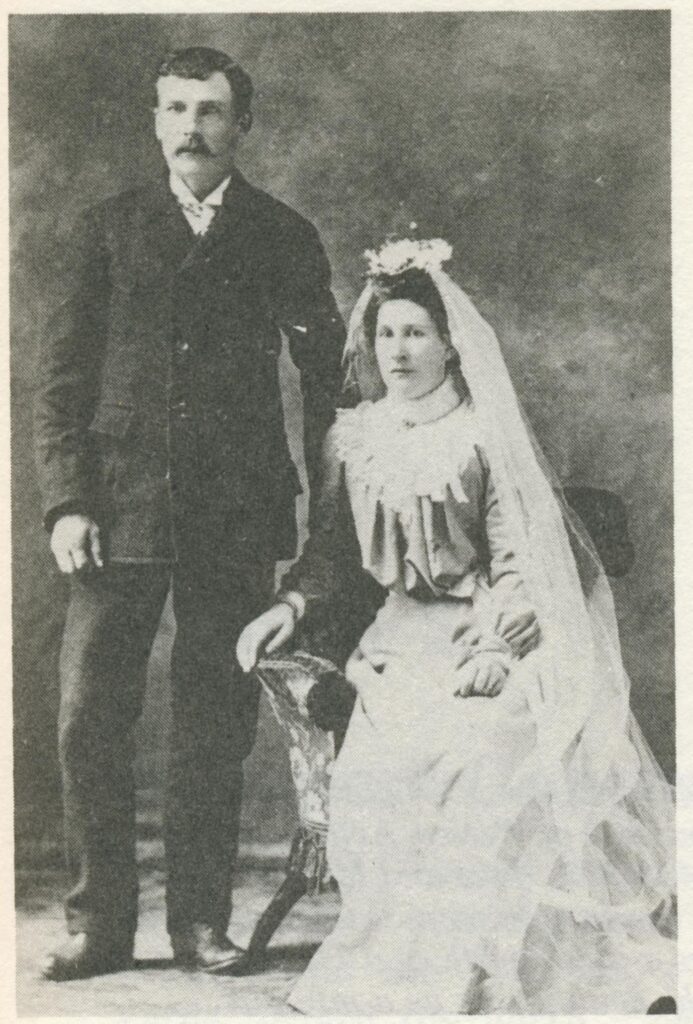 In 1901, Reverend Henry Bourne was the Anglican Church minister living in the community of Monmouth, Haliburton County. Born in England, Henry came to Canada West in 1841. Henry and his wife, Jane lived with their three sons and daughter, lived in Essonville at this date. Also living with them was Jane’s widowed mother, Hannah Hallowell. Reverend Bourne was the minister who would perform the wedding service at the Dunford-McCrea marriage of Frederick and his bride.

Frederick’s bride was Catherine, daughter of James and Elizabeth (Golden) McCrea. She was born 28 Mary 1879 in Monmouth Township. Their wedding was held on 17 February 1903 at the Anglican Church in Essonville

Richard Cephas, son of Richard Green and Mary Ann (Hamlin) Dunford, was born in 1875 in Douro Township, Peterborough County. He died as a young man of twenty-two years, in Haliburton County on 19 January 1897.

Margaret Melissa, daughter of Richard Green and Mary Ann (Hamlin) Dunford, was born 22 July 1877 in Douro Township, Peterborough County. At the age of twenty-four years, Margaret married George Sylvester Miller. Their wedding took place in Haliburton County on 17 December 1901. They spent their married lifetime together in the area. Margaret (Dunford) Miller died on 16 June 1951. George Miller died a few years later, on 28 June 1958 at Woodbridge, Ontario. They rest in the Wilberforce Cemetery in Haliburton County. 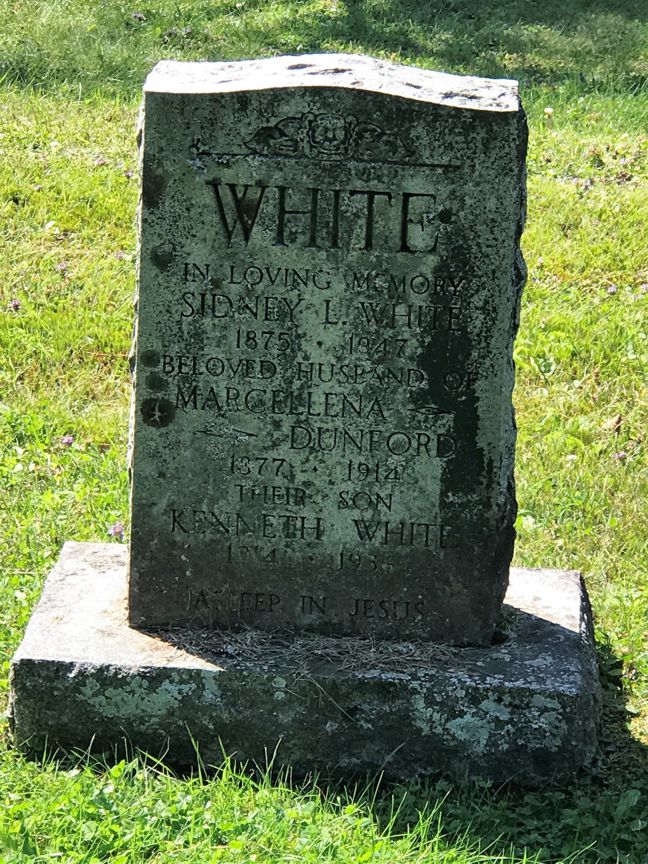 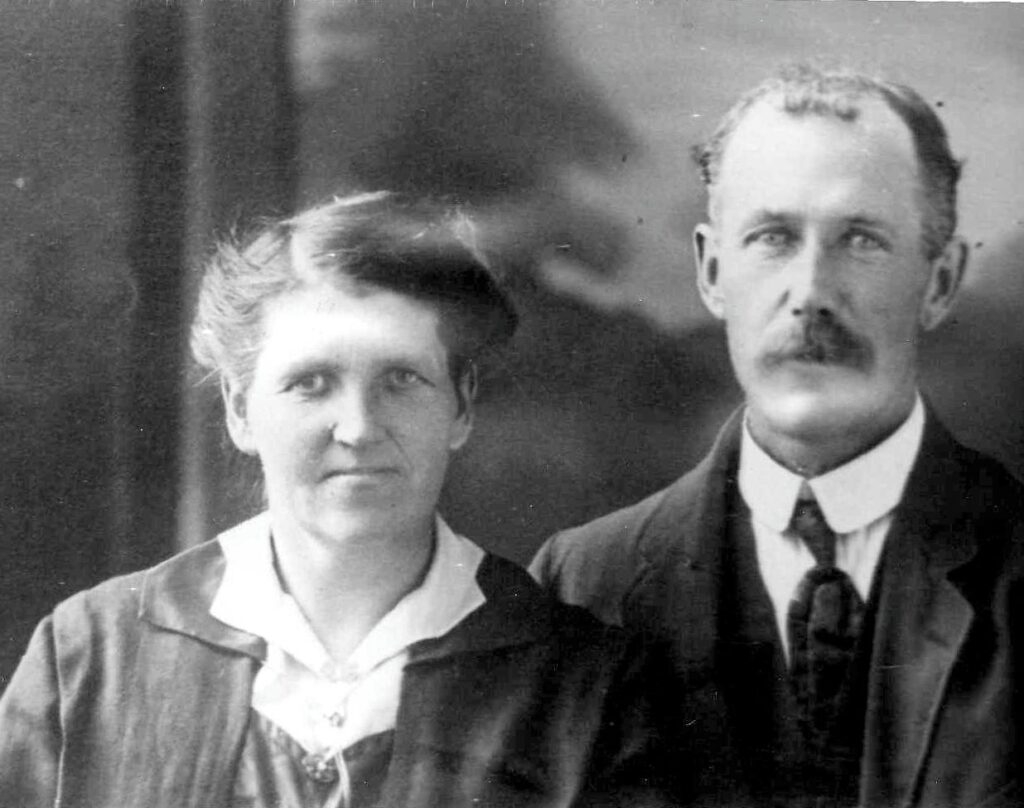