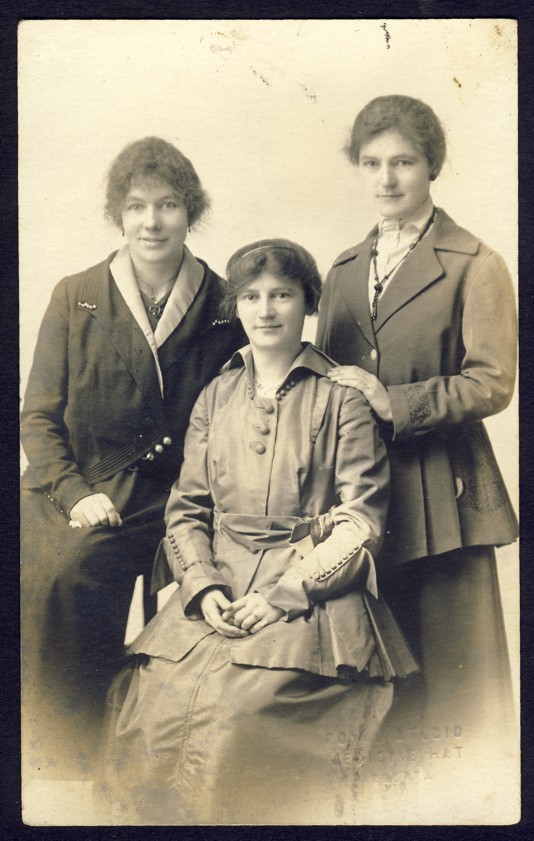 On the back of this old photograph of three of the family girls  is written “Agnes Scollard’s son a priest – Connell…Lottie, Eliza, Clara”.

Who might these young ladies be? Unraveling their family connections takes some work. It is known that the young women in the photograph were members of a Scollard family. Also known, it the fact that their family came from Ennismore Township, Peterborough County.

The photograph is done in the style of a post card. It was taken at Royal Studio, Medicine Hat, Alberta. These small details can help give a time frame to its taking.

The Kodak Company introduced the No. 3A Folding Pocket camera in 1903. As a result of this design, images could be printed on postcard backs. Postcard backs, of course, were a specialty paper for production of postcards.

By appearance these ladies are perhaps in their twenties. It is a noteworthy point of history, that Real Photo Postcards remained popular from their introduction until about the 1930s.

Girls in the James Scollard Family of Ennismore

Of the ten daughters, it is Elizabeth or Eliza, Clara and Loretta or Lottie, who appear in this group photo.

Loretta Scollard married Timothy Joseph Crough in Ennismore on 20 September 1910. They lived in the township and raised a family of three sons and a daughter.

Elizabeth Scollard became the wife of William Harrington on 23 October 1893. They lived in Ennismore and raised a family of eight children.

Finally, to conclude the details of these four Scollard sisters, Agnes married a Charles Connolly (also spelled Connelly). It appears that she lived in Alberta after her marriage. A marriage date for Agnes is not known. She was still living at home in Ennismore, Ontario in 1911. As well, if all the girls in the photograph were at least twenty years old, then Loretta was not in her twenties until after 1902. Thus the time frame for the old photograph must have been between 1911 and probably 1921, when the girls were young enough to be in their twenties and not yet so involved with the raising of their own families.