In November 1819 Roderick O’Brien was born in Upper Canada. In his young adult years, Roderick settled in Victoria County and eventually married Ann Parkin. Ann was born March 1820 in Derbyshire, England. After their marriage, Rodrick and Ann lived most of their lifetime in Victoria County. Ann (Parkin) O’Brien died at their family home, Lot 9 Concession 11 in Laxton Township, Victoria County on 27 January 1901. A year later, on 16 September 1902, Rodrick O’Brien passed away. They rest in Pinegrove Cemetery at Norland, Ontario. 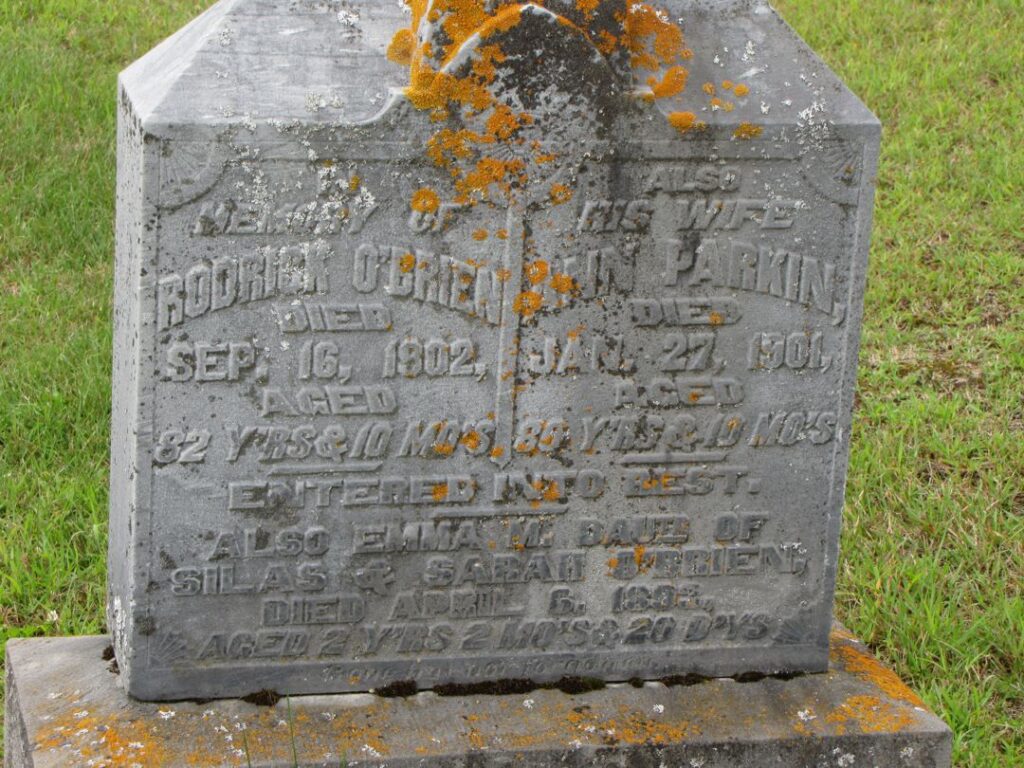 Family of Rodrick and Ann 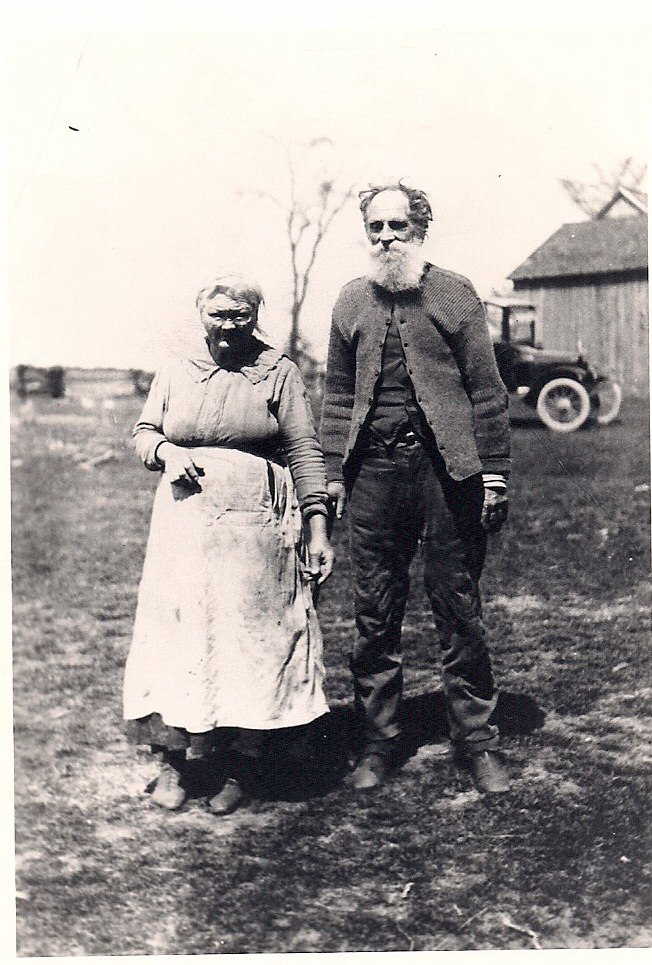 Silas Jesse, son of Rodrick and Ann (Parkin) O’Brien grew up and spent his lifetime in Somerville Township. As a young man, he married Isabella McPherson on 26 March 1866. Isabella was born in Ops Township in 1845, a daughter of Godfrey and Catherine McPherson. They had seven children before Isabella’s death on 5 October 1883. Five years later, Silas married again. His second wife was Sarah Jane Greer, born in 1857 in Dufferin County, Ontario. She was a daughter of Charlton and Matilda Greer. Sarah Jane and Silas had a family of seven children, thus giving Silas a total of fourteen children. He died in Somerville Township on 20 May 1923. Sarah Jane (Greer) O’Brien died 20 September 1927 in Toronto, Ontario.

Alfred Rodrick, son of Rodrick and Ann (Parkin) O’Brien was born 9 July 1848 in Ops Township. As a young man he married Annie Clark, daughter of Robert and Margaret (Thompson) Clark. Annie was also born in Ops Township, on
25 January 1849. Alfred and Annie had a family of eight children, four sons and four daughters. In their later years, they resided in the Parry Sound District of Ontario. There Alfred died on 1 February 1926. Annie’s death occurred on 7 May 1932.

Jesse Samuel, son of Rodrick and Ann (Parkin) O’Brien was born
1 February 1851. On 12 February 1878, he married Ann Alice Loretta Powers. Known as Alice, she was born in 1859 in the state of Wisconsin, USA.  Jesse and Alice had a family of eleven children. In the 1880s, Jesse and Alice resided in Somerville Township, Victoria County. Here their first two children were born. By the 1890s, the family had moved to the Algoma District of Ontario. Here they remained for two decades. Here the rest of their children were born. In the early 1900s, the family was in Saskatchewan. In the Estevan District, on 16 September 1909, Jesse Samuel O’Brien died. His earthly remains were buried in the Stoughton Cemetery at Estevan. Alice returned to Ontario for the remainder of her life. She lived in Prescott County in 1911 but later returned to the Algoma District. Alice died at Sault Ste. Marie on 23 June 1928. She rests in Greenwood Cemetery, Algoma, Ontario. 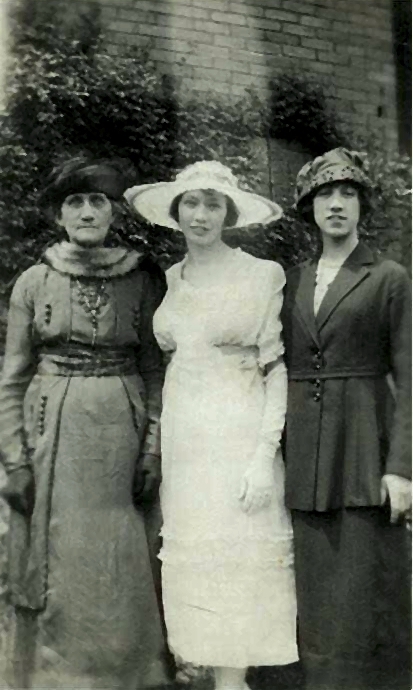 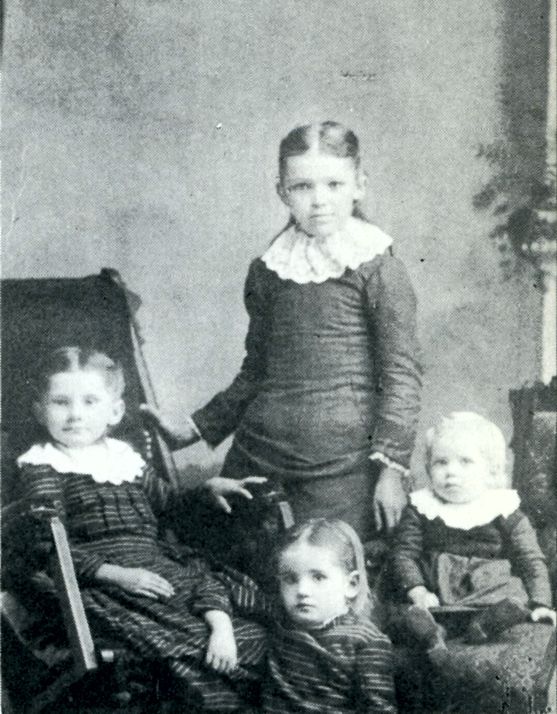 Annie Evangeline, daughter of Rodrick and Ann (Parkin) O’Brien, was born
1 July 1853 in Somerville Township. When she was about 21 years old, Annie married Daniel Esson. Daniel’s family surname has various spellings, Eason and Easson in addition to the Esson version. Annie and Daniel married in the village of Fenelon Falls on 16 November 1874. In 1876, a daughter Margaret Ann was born to the couple. Four years later, in 1880, another daughter, Mabel Amelia Alberta was born. Myrtle Eda, the family’s third daughter, was born in 1883. In 1887 a son, Rodrick Daniel was born and in 1893 their fifth child, Martha Jane was born.

Shown here in a photograph taken in the later 1880s, are four of the children of Daniel and Annie. They are dressed in home-spun and homemade dresses. Left to right are Mabel, Myrtle and Rodrick. Standing is Margaret Ann.

The family resided in Victoria County throughout the 1880s, 1890s and early 1900s. Daniel Esson died in the 1890s after the birth of his youngest daughter Martha Jane. Annie Evangeline (O’Brien) Esson died at Norland, Ontario on 19 August 1928. 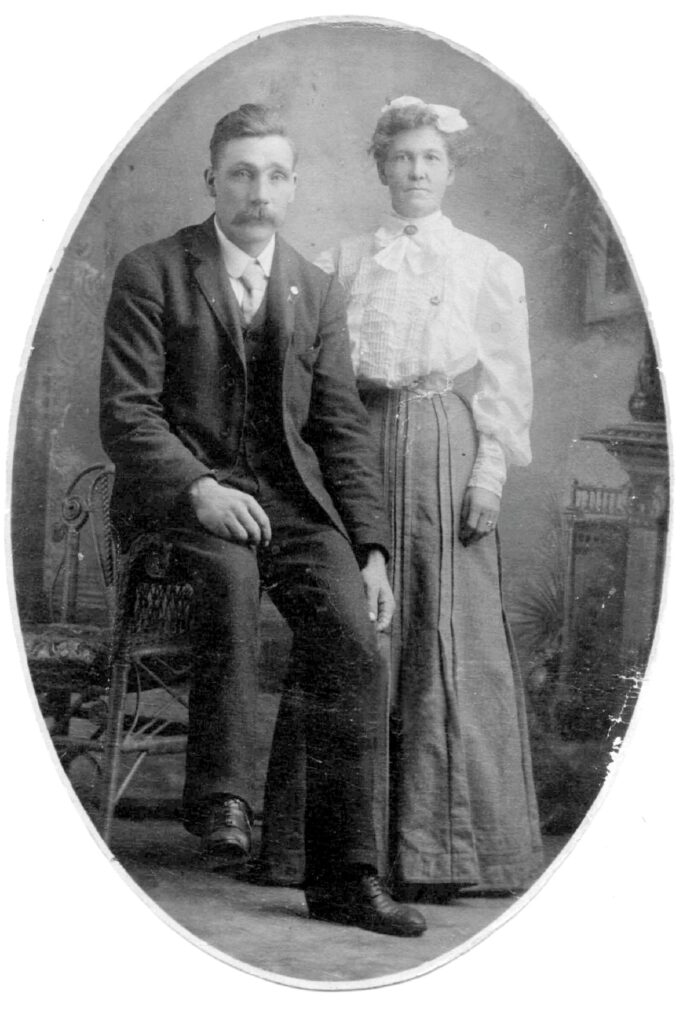 Susan Alberta Truax O’Brien was born in 1862 in Fenelon Township, Victoria County. In 1871 she lived with the family of Rodrick and Ann O’Brien. At that date, she was listed with a surname of Truax. Ten years later she was shown as one of the O’Brien children of Rodrick and Ann. When Susan married on 11 July 1881, her parents were named as Rodrick and Ann. Susan married George Clark, son of Robert Clark and Margaret Thompson. The young couple married in the village of Coboconk, Ontario.